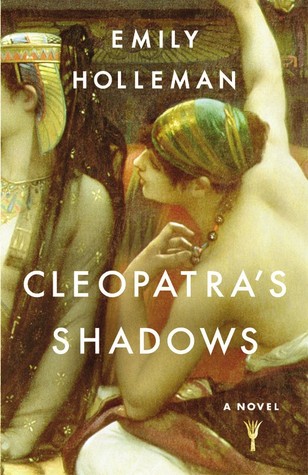 **I received an advance review copy of Cleopatra's Shadows courtesy of NetGalley and Little, Brown and Company.**

So you're walking along, browsing the aisles of the bookstore when you see Cleopatra's Shadows hanging out on the shelf looking enticing. You think, "Hm, Cleopatra? I'd like to know more about her, let's see what this is about." This is where you go astray, because this is not a book about Cleopatra - it is about her two sisters that are so often forgotten about and overlooked. This is something new and exciting, with a wonderfully exciting new concept and area to explore. So let's dive in!

This book was a very nice diversion from the constant focus on Cleopatra; instead, as stated above, it follows her two sisters, Arsinoe and Berenice. The book alternates perspectives between the two as each struggles to deal with their newfound situation after Cleopatra and their father suddenly set sail and depart from Alexandria for an unknown amount of time. Berenice struggles with acting as a strong female leader; her goal is to keep Rome out of Egypt - which is, of course, much harder than it sounds. She must learn how and what decisions to make, who to trust, and whether or not to listen to her many advisors. Now under Berenice's rule, Arsinoe must submit to Berenice's authority and act loyal to Alexandria, whether she truly feels loyalty to her sister or not. Arsinoe, however, is also extremely close with her sister Cleopatra and is devastated by her leaving, praying that she will soon return for her and not leave her.

One of the large aspects of this novel focuses on Arsinoe's struggles with feelings of inadequacy, realizing that she has always been just the regular, leftover sister that isn't as important. As the title states, she has always been a shadow of her elder sister, Cleopatra. Even Berenice has faced this dilemma, despite the fact that she is now the current ruler of Alexandria since the rest of her family has left. I think we are meant to like and relate to Arsinoe more out of the two, but I almost preferred Berenice; Arsinoe was rather unlikable and hard to sympathize with. Holleman could have made these two sisters shine and move out of Cleopatra's shadow, but unfortunately she failed to do this, making each of them rather lackluster and uninteresting.

The time period that Holleman chose to write about is incredibly engrossing, because it is a time where much less is known about what occurred in history, and it is also not quite as popular as most others - likely because most books and research tend to focus more on Cleopatra. I appreciated Holleman's portrayal of Cleopatra, Berenice, and Arsinoe - historical facts and insights tend to get slightly fuzzy when it comes to the nitty-gritty of these women and their personalities, so I admired how she decided to mold and depict each of them for her novel.

Holleman's narrative voice is very fluid and light. Despite its slow pace, her writing does draw you in and make you interested to find out the conclusion of each sister's struggle. Her writing is not exceptionally thrilling or action-packed, but is instead written with a much more calm, dramatic flair that leaves the reader with a deeper and more reflective feeling.

One of my biggest problems with this book, however, was the lack of plot. This is tricky for me to explain, because while there are defined issues that each sister must figure out and resolve within the story, there also isn't much substance. Their issues do not seem to have definite answers or resolutions, and I often felt that the story was just moving along with no clear direction. It felt as if Holleman was just writing random events that seemed to only take place in order to add more to the novel while she tried to figure out exactly what she wanted to happen. There was too much 'fill-in.'
I also felt that there was a bit of a random, unnecessary turn of events near the end regarding Arsinoe that did not seem to fit with the rest of the story, but I don't want to go into that too much due to spoilers.

Overall, I am giving Cleopatra's Shadows three-and-a-half stars, because although it was an interesting book, but it was missing many elements that make it deserving of a higher rating. If you enjoy ancient history, historical fiction, or political intrigue and the inner workings of court, then I highly recommend this book to you!

Helen of Troy by Margaret George
The Creation of Eve by Lynn Cullen
Abundance: A Novel of Marie Antoinette by Sena Jeter Naslund
Posted by Jordan @ForeverLostinLiterature at 10:46 AM