Anna and the Swallow Man by Gavriel Savit

**Anna and the Swallow Man is now available** 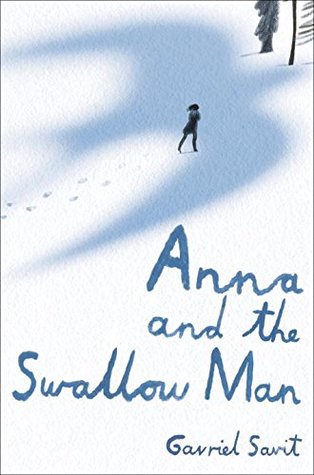 
**I received an ARC of Anna and the Swallow Man courtesy of Knopf Books. Huge thanks!**

Anna and the Swallow Man was entirely unexpected and I had absolutely no idea what to really expect from this book apart from the description on the back, and it was simply breathtaking. I had never heard of or seen this book in many places prior to my receiving it in the mail, but since I have read it I've started to notice it on some upcoming YA 2016 release lists, and I was actually a bit surprised. The protagonist is indeed a young girl, but I definitely didn't feel that this is something I would find in the typical YA section. I would say that Anna and the Swallow Man is the type of book that crosses all genres and would be a wonderful read for almost any age, and certainly adults as well. Now, on to the review!

Anna and the Swallow Man left me with a feeling of what I can only describe as emptiness - though not necessarily a bad sort of emptiness. A liberating emptiness, a clean slate. It fresh and bright, yet dark and melancholy at the same time. It's lyrically written and flows effortlessly. Savit has a true gift for writing and portraying a narrative that has an incredibly unique style, both strong and soft at the same time. He weaves together his characters and the settings in an effortless motion. His voice is lyrical and heartbreaking; every sentence uttered is full of emotion and meaning, and I found myself underlining countless phrases throughout.

This novel is definitely more character-driven than plot-driven, and it's not very full of action. The description of this book gave me the impression that this book would be a more-fun-than-serious story of a young girl traipsing around war-torn Europe with a man she meets who protects her and is intriguingly mysterious. The mysterious man part is true, but the rest... not so much. It was a hundred times better than that. It was the story of young girl who becomes lost and alone, and through this she finds an odd man who decides to take her in and accompany him as he travels across foreign land for an unknown period of time with an unknown destination. This is all occurring during the heat of World War II, and it is during this journey with the Swallow Man that Anna begins to learn about life, loss, and sorrow. It is a dismal, cruel time, and Anna and her friends discover this and learn to live with this during their travels.

I was constantly asking questions and found myself enraptured in Anna and her Swallow Man; they are both incredibly fascinating characters and I absolutely loved Anna's bold and exceptionally intelligent character. I don't necessarily mean intelligent in an academic manner - though I'm sure she is - but rather intelligent in how she sees the world and acts around people. She is an incredibly bright, fresh young girl, and I would sincerely love to add some quotes to exemplify her nature, but since my copy is an ARC, I will have to refrain from doing so until the book itself is published. Suffice it to say, she has a very unique perspective on life and events that are a result of her naive nature and her own extraordinary outlook.

The Swallow Man is incredible. He instills such mixed feeling of awe, fear, --, and even a little discomfort; I cannot get enough of him. I could ponder over his character for hours and still never feel that I truly understand him. He is entirely enigmatic and odd, a mixture of brilliance and pure endurance. It is the Swallow Man that introduces Anna to what he calls 'Road' speak, and I found it just as enticing and compelling as the Swallow Man itself. Anna already knows countless languages as a result of her upbringing, as her father made sure she was educated in many, and this new 'language' she learns just really seems to add a new element and depth of layer to the entire notion of languages and communication. This 'language,' however, isn't a true language - it is more of one of survival. It is how they speak in order to continue their travels and stay safe.

Almost every sentence struck a deep chord within me, and I believe that this would be a wonderful novel for almost anyone simply because it truly has a little something in it for everyone to take away. The exact situation may not be exactly applicable to everyone (I mean, who here is currently living in the cold winter snow of Poland during World War II? If you are, you reserve the right to berate me), but there are so many things said that could benefit everyone and make everyone think a little bit more about various ideas and common notions.

Overall, I am giving Anna and the Swallow Man five stars for its lyrics, gorgeous prose, and meaningful story. I highly, highly recommend this to anyone; this is a novel that I think is perfect for a much-needed break from everything. It's calm and different from everything else in our lives, and I think it is needed.

You might also like:
Warren the 13th and the All-Seeing Eye by Tania del Rio, illustrated by Will Staehle
Kafka on the Shore by Haruki Murakami
The Little Paris Bookshop by Nina George


Posted by Jordan @ForeverLostinLiterature at 10:45 AM