**I received an ARC of Consequence courtesy of Henry Holt and Co./Macmillan in exchange for an honest review.** 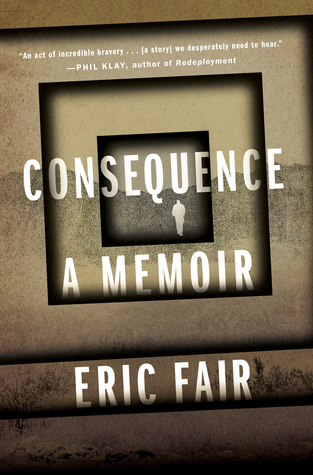 I was unequivocally captivated by this book; I could not put it down. This book is, in itself, an immense act of courage on the part of Eric Fair. Writing down these stories and experiences was undoubtedly a difficult task, let alone the impending backlash that may result. The truth is that war is ugly and dirty no matter how you feel about it. Whether you are in support or not, tragic events occur that cannot be explained or understood.

Consequence is Fair's memoir of his experiences as an interrogator in Iraq. He describes the many horrors he witnessed and participated in, which leads him to question himself, his country, and his religion. I won't say too much about the content because this isn't my story to tell; this is Eric Fair's story, and if you want to hear it, then you must read this book.

Some scenes within this book are difficult to read, but because of Fair's blunt, lucid explanations, I was able to appreciate the strength that it took to write about these events knowing the repercussions that may result and the difficult memories they will bring up. However, I don't get the impression that Fair is writing for us to praise him for his courageousness, but rather to give us an honest picture and explanation of his accounts.

An ongoing theme found within Fair's recollections is his battle with this need to be a part of the war to protect and honor his country and to do his part, regardless of what that means for his family life. I thought about his wife, Karin, quite a lot, and I wish that I could have heard more from her side and what she felt during those years in which she had very little contact with her husband and knew very little about what was occurring.

One particular aspect of this book that stood out to me, besides the main interrogation theme, was the relationships formed between Fair and his friends. People can form bonds through any experiences, no matter how small or horrible it may be, and it was interesting to see how these bonds manifested themselves. For instance, Fair relays how him and one particular friend enjoyed each other's company because both respected and understood the need for silence. They didn't want to talk about what they were doing or anything else, so they had a rather silent companionship that allowed them to grow close.

When I finished the book, I pondered the title, Consequence, with a new outlook. What is consequence, and how should it be delivered? Are the nightmares and guilt that Fair feels his consequence? Is it the consequence from the government? Is his consequence the pity and shame we feel as we read about the things Americans have done, and how we are now affected by them? Consequence is a book that needs to be read and raises a great deal of provocative topics for us to consider.

This book may not be for everyone, but I still recommend it to everyone. Overall, I am giving Consequence five stars for its impact, writing, and compelling quality.

You might also like:
The Girl With Seven Names by Hyeonseo Lee
Posted by Jordan @ForeverLostinLiterature at 8:22 AM