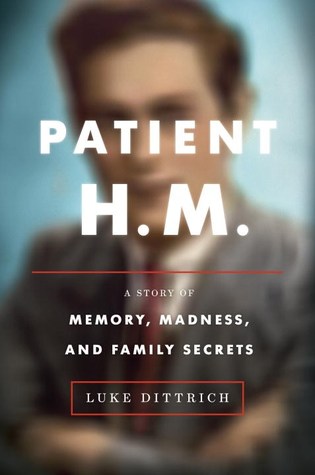 *I received a copy of Patient H.M. courtesy of Random House and NetGalley in exchange for an honest review.*


H.M., the subject of this book, is one of the most important studies of neuroscience in the history of neuroscience. When he was a child, H.M. had a bad fall that is believed to have caused him to suffer from severe epilepsy. To combat this, he was given a new type of lobotomy that was meant to repair his brain and ease his suffering. The procedure was unsuccessful, and a result, H.M. began to suffer from amnesia and was thus unable to create new memories. The subject of Patient H.M. is fascinating, but unfortunately the writing itself was rather disappointing.

While the primary focus of this book was on Patient H.M., there was also quite a bit of attention given to Bill Scoville, Luke Dittrich's grandfather. Scoville initially performed H.M.'s surgery and ended up becoming a prominent figure in the neuroscience industry - though in a much more controversial manner, as his methods were not as widely and readily accepted. I found the information surrounding Scoville particularly interesting and well-written, and I really felt that the fact that Scoville's grandson - our author - added much to the story-telling. It created a connection that made this book more than just a research project - it was more personal than that.

It is obvious that Dittrich performed in-depth research while writing this book, and his authority certainly shows throughout his elegant writing. Though I am sure he is not quite as knowledgeable as an actual neuroscientist, I think it covers a lot of important areas of neuroscience in a thorough and understandable manner. His writing is mature and fact-filled, but also extremely readable.

Patient H.M. not only explores this fascinating and groundbreaking case, but it also focuses on histories of neuroscience and various procedures, the state of mental asylums, and other various observances within the history of neuroscience and mental health. While this information was all interesting in a general manner, it often made the book feel rather disjointed. If this book were a person telling the story, they would be a person that often falls into tangents and loses their train of thought, thus dragging out any story or conversation to a much longer length than it needed to been. Similarly, I also felt that some of the anecdotes were a bit unnecessary or simply to long-winded, In addition to these issues, many areas felt repetitive, as I distinctly remember thinking more than a few times, 'didn't I just read about this?'

Overall, Patient H.M. is a fascinating story that is sure to enlighten anyone interested in any and all aspects of neuroscience, and I definitely recommend it to those who fit that description. It is due to the writing and somewhat disjointed nature of the book that has led me to give three stars, as it was these reasons that kept me from fully enjoying this book.

You might also like:
Dataclysm by Christian Rudder
Science of the Magical by Matt Kaplan
Seven Brief Lessons on Physics by Carlo Rovelli
The Wicked Boy by Kate Summerscale
Physics of the Impossible by Michio Kaku
Posted by Jordan @ForeverLostinLiterature at 7:48 AM