**Freeks by Amanda Hocking will be released Tuesday, January 3rd!** 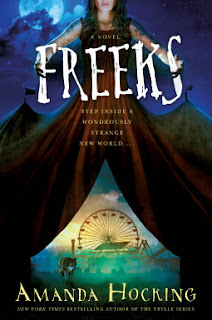 *I received an ARC of Freeks by Amanda Hocking in exchange for an honest review.*

I love a good circus/carnival story, so when I discovered an ARC for Freeks had arrived in the mail, I was pretty excited. I hadn't read (or heard of) any of Amanda Hocking's other work, so I don't really know how this stands in comparison to any of those, but this book certainly held its own, despite a somewhat amateur-feeling that seemed to to be present throughout the writing.

There were a lot of characters in this book, and while I do enjoy a nice variety, it sometimes felt like there were just a few too many. Back stories and information were given about each character, and I was somewhat overwhelmed by them all as I wondered whether I would need to remember this information or not. The characters were also somewhat stereotypical in a lot of their roles, but I enjoyed it all the same. You need the emotional and unpredictable fortune teller figure and the risk-taking, adventure-loving performers.

Mara was a really well-written character, and I found her relationship with her mom, the other carnival members, and Gabe to be done in a genuine manner. I thought that Mara (and most of the characters) were developed really well, though they all could have used a little more character development throughout the book. Mara was extremely realistic, and I loved that. She was a bit stubborn and frustrating at times, but nothing was over the top or exceedingly annoying, and that is something that is hard to find in a lot of books like this. I also didn't feel too strongly about the supposed 'insta-love' between Gabe and Mara. Yes, it was a strong reaction for recently meeting each other, but I actually understood it and felt like Hocking walked us through each of their feelings really well, and Mara even knew the entire time that she shouldn't get too attached.

What didn't sit well with me regarding characters was how downplayed many of the reactions were. When certain characters were injured or attacked, it seemed as if, overall, the rest of the characters didn't really seem to react all that much. Things were rather subdued, and no one was ever extremely upset. Maybe a life as a carnie inures you to crazy stuff, but it just seemed odd.

I really enjoyed the late 80s setting, and I though Hocking did a great job of transporting her readers to that time period. Nothing felt forced or cliche'd, and any and all references were done extremely well. I'm not sure how one exactly goes about doing research for a book such as this, but Hocking certainly did it. The carnival felt authentic and not overdone, as many books tend to do. I only wish there had been a bit more development regarding the carnival life and the plot itself. As much as I enjoyed reading this book, I always wanted just a little bit more.

The biggest issue I had with Freeks had to do with occasional awkward sentences and dialogue. For the most part, the writing was fairly average and worked well with the story, but ever once in a while there would be random moments that completely broke up the flow and were entirely awkward. It really made me fall out of the story for a second before moving past it. Despite this, I remained hooked throughout most of the book, and the positive moments really outweighed the negative.

This was just a really enjoyable read that provided me the perfect break to sit back, relax, and enjoy. Overall, I have to give Freeks three-and-a-half stars!

You might also like:
The Book of Speculation by Erika Swyler
A School for Unusual Girls by Kathleen Baldwin
A Fierce and Subtle Poison by Samantha Mabry
A Shadow Bright and Burning by Jessica Cluess
Daughter of Smoke and Bone by Laini Taylor
Arabella of Mars by David Levine

Posted by Jordan @ForeverLostinLiterature at 8:32 AM