Blog Tour + Review: The Confessions of Young Nero by Margaret George, out 3/7! 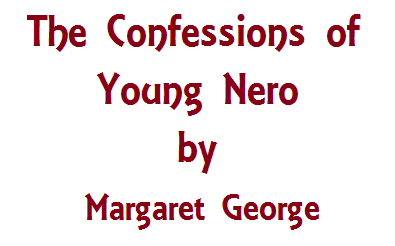 I am incredibly excited to share Margaret George's latest release with you all today! Her latest novel, The Confessions of Young Nero, begins a fictionalized account of the Roman Emperor Nero's life, starting from his innocent youth to his illustrious adulthood. Below you will find a brief synopsis of the book, a review by yours truly, and a wonderful video of Margaret George describing three of Nero's most defining life moments.

THE CONFESSIONS OF YOUNG NERO takes readers through the early life of Rome’s infamous Nero. Through the machinations of his mother, Agrippina the Younger, Nero became emperor at the age of sixteen, the last of the Julio-Claudian dynasty. But the road was a frightening one.  The young boy, an intelligent, sensitive and watchful child, had a series of psychological shocks from an early age.  His cruel uncle Caligula and his scheming cousin Messalina threatened his life, and his domineering and ambitious mother Agrippina married and poisoned two men en route to securing the throne for her son. Agrippina viewed Nero’s power as an extension of her own will. But once on the throne—like the teenage boy he was—Nero did not want to take orders from his mother.  Soon the world was not big enough for the two of them. Thereafter he was remembered as a hedonist and tyrant who “fiddled” while his people burned. But the truth behind the caricature, revealed here, shows Nero to be instead a product of his mother’s relentless ambition, and the incest, violence, luxury, and intrigue that have gripped Rome’s seat of power for generations.


Margaret George is a big name in the world of historical fiction, and The Confessions of Young Nero only seems to cement that notion. I have read two of her previous works - Helen of Troy and The Autobiography of Henry VII - and greatly enjoyed both, so I had high hopes for this new release.

Many of Ancient Rome's illustrious and notorious emperor's are often portrayed in books and film, some focusing mainly on fact, but most focusing on the juicy bits that make for great entertainment. George combines both of these ideas by creating a detailed life of the Roman Emperor Nero, a man with many interesting stories to tell. She takes a unique, introspective eye to the life of Nero, fashioning an informative and engaging tale.

George writes with a lyrical quality that brings Rome to life and engaged me in the setting. I think she did a great job capturing the qualities of Romans and emphasizing the virtues and qualities that they valued, as well as those that they didn't, such as the Greek influences that Nero loved. Her descriptions of the setting and people in it are wonderfully vivid and allowed for every scene to play out before my eyes.

This book is a bit slow to start, but once it gets going, it is hard to put down again. The story begins with  Nero as a young child, and although this initially provided an interesting perspective, it did drag on just a bit too long. Once the story progressed and Nero began to age and experience more events, the story really picked up and introduced a wide array of fascinating characters, from Nero's conniving mother to his close circle of friends that he goes carousing with in the night.

The only other downside I had while reading this book was that I just felt like there was a little bit of George's usual magic missing from this book. It was still an exceptional book, but that extra magical quality of hers that I have found in her other work just wasn't quite there - it was a little lifeless, and I couldn't quite put my finger on what was different.

Overall, I am giving The Confessions of Young Nero four stars! If you are a fan of historical fiction, or juts want to read a good story, then I highly recommend this one!

AUTHOR BIO
Margaret George is the author of the bestselling Autobiography of Henry VIII; Mary, Queen of Scotland and the Isles; The Memoirs of Cleopatra; and Mary, Called Magdalene.