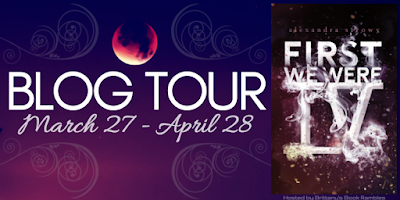 Hello everyone! I am happy to welcome you to today's stop on the First We Were IV blog tour, hosted by Brittany's Book Rambles! First We Were IV is an incredibly new YA thriller by Alexandra Sirowy that will be published July 25th. This book was such a pleasure to read, and I hope you all have a chance to check it out!  For my stop, I am pleased to share with you a guest post from Alexandra Sirowy herself, which you can find below the book and author information, as well as a tour-wide giveaway at the bottom of the post.
Huge thanks go out to Brittany from Brittany's Book Rambles, Alexandra Sirowy, and Simon and Schuster for allowing me to be a part of this wonderful tour! 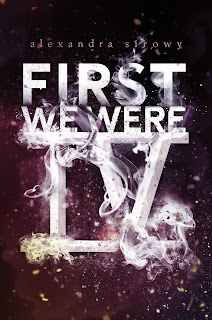 A group of friends start a secret society in this out-of-control thriller from the author of The Telling and The Creeping that examines the all-consuming love of lifelong friendship—and what someone is capable of when they’re afraid of losing it.

Izzie loves nothing more than her three best friends, Viv, Graham, and Harry, and the bond the four of them share. And she’s terrified of their friendship falling apart next year when they go off to college. To bind them together, she decides to create that will belong only to them, a special thing that they’ll always share between the four of them. And so they dream up the Order of IV, a secret society devoted to mischief that rights wrongs and pays back debts. At first, it works like a charm—but when the Order of IV’s escapades get recognition beyond their wildest expectations, other people start wanting in. And soon, what started as a game of friendship is spiraling into something dangerous and beyond their control—and before it’s over, they’ll pay the ultimate sacrifice.

Alexandra Sirowy is the author of the young adult thrillers THE CREEPING, the Bram Stoker Award® Nominated THE TELLING, and the upcoming FIRST WE WERE IV. Alexandra attended a women's college as an undergrad and received her graduate degree in International Studies. When she isn't writing, she loves to travel, read, eat, and get into mischief. She lives with her husband in Northern California.

Disclaimer: All content directly from First We Were IV (such as quotes and excerpts) is taken directly from an advanced reader's copy of the book. Therefore, it is not to be separately quoted from due to the fact that it is not in its final publication form.

What we do for friendship…
The impulse for First We Were IV came from me wanting to write a thriller about friendship, a topic that I’ve been obsessed with for almost my whole life.

Way back when I was a plucky seven-year-old who got her first diary, I used to write short ghost stories, though not of the spooky variety. My stories always featured a live child and a ghost child meeting, becoming friends, and going on adventures. I was obsessed with friendship. I was also a lonely kid since we moved around a lot and I didn’t have siblings yet.

We finally settled in one place and I made friends in middle school who I’m still friends with today. The road was not smooth, though. I’ve always worn my heart on my sleeve when it comes to friends and that has led me into some embarrassing situations. Like, in the seventh grade, one of my best friends decided she was going to put on a Nutcracker Ballet, have it performed in her attic, and charge for tickets. I jumped up and down when she said she wanted to include me and cast me as the Snow Queen. Just one problem, I wasn’t a ballerina. I hadn’t danced since I got kicked out of ballet class at six-years-old for asking the teacher if class was almost over. What’s more awkward than a pudgy, uncoordinated twelve-year-old girl dancing in a white leotard? Said twelve-year-old girl in a leotard tripping and falling on one of the dancing snowflakes on opening night, all in the name of not letting her friend down.

These little embarrassments have made me think a lot about what friends do for one another. The four best friends in First We Were IV – Izzie, Viv, Graham, and Harry – have known each other since they were little kids. They’re the perfect storm of friendship. Izzie is spirited and funny, Viv is stylish and dramatic, Graham is brainy and sarcastic, and Harry is sincere and thoughtful. They’re on the periphery of everyone else’s social scene, and they couldn’t care less. Their entire universe revolves around their headquarters in Viv’s barn. So as their senior year of high school begins, they’re worried about what’s to come. Will they text every day in college? What if they’re replaced by newer, shinier friends. What if without living in the same town, they drift apart?

Izzie proposes a solution. The four should invent a secret society so that they’ll always have something tying them together. And the secret society won’t be for nothing, it will have meaning, vigilante-pranks it plays to improve things. What ensues is a story of friendship, love, revenge, murder, and secrets.

While writing First We Were IV, I couldn’t help feeling that I was writing the friends I needed as a high school student. The kind of friends who make a universe and who you risk everything to protect.

Week 2
April 3: Emily Reads Everything - Fancast
April 4: The Eater of Books - History of Secret Societies
April 5: It Starts At Midnight - Author Guest Post: FIRST WE WERE IV vs. Alexandra's Previous Books
April 6: BookCatPin - Mystery YA List
April 7: A Book and a Cup of Coffee - Moodboard


Never miss a post of bookish fun by subscribing to Forever Lost in Literature!
Posted by Jordan @ForeverLostinLiterature at 5:00 AM