TBR Thursday: Carthage Must Be Destroyed by Richard Miles

Any fellow history fans out there? This week's TBR Thursday pick is Carthage Must Be Destroyed by Richard Miles. At little backstory: one of my university professors created a new course that I am taking this quarter focused solely on Rome's military history, and I have been absolutely loving  it. This of course includes the Punic Wars, which means the mysterious city of Carthage is prominent. It honestly pains me every time I remember that any possible histories of Carthage have not survived and that we don't really know much about them, which is the main focus of this book!

I ordered this one on ILL from my library and it just came in! I am dying to know more about Cathage, and it seems that Richard Miles has provided us with one of the best compilations of information that we have about the city. I can't wait to start it! 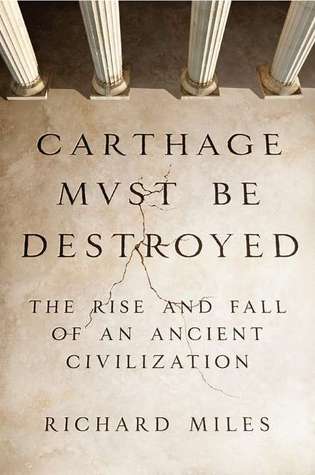 "An epic history of a doomed civilization and a lost empire.
The devastating struggle to the death between the Carthaginians and the Romans was one of the defining dramas of the ancient world. In an epic series of land and sea battles, both sides came close to victory before the Carthaginians finally succumbed and their capital city, history, and culture were almost utterly erased.
Drawing on a wealth of new archaeological research, Richard Miles vividly brings to life this lost empire-from its origins among the Phoenician settlements of Lebanon to its apotheosis as the greatest seapower in the Mediterranean. And at the heart of the history of Carthage lies the extraordinary figure of Hannibal-the scourge of Rome and one of the greatest military leaders, but a man who also unwittingly led his people to catastrophe.
The first full-scale history of Carthage in decades, Carthage Must Be Destroyed reintroduces modern readers to the larger-than-life historical players and the ancient glory of this almost forgotten civilization."

Are you interested in reading this book? What books are on your TBR?