Waiting on Wednesday: Wolf on a String by Benjamin Black 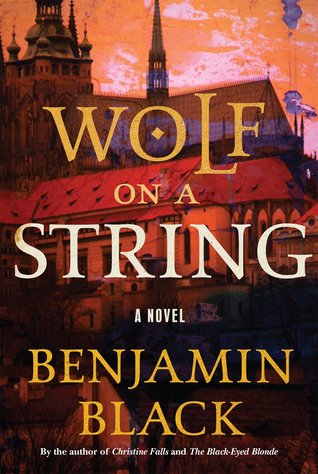 "Bestselling author Benjamin Black turns his eye to sixteenth century Prague and a story of murder, magic and the dark art of wielding extraordinary power
Christian Stern, an ambitious young scholar and alchemist, arrives in Prague in the bitter winter of 1599, intent on making his fortune at the court of the Holy Roman Emperor, the eccentric Rudolf II. The night of his arrival, drunk and lost, Christian stumbles upon the body of a young woman in Golden Lane, an alley hard by Rudolf’s great castle. Dressed in a velvet gown, wearing a large gold medallion around her neck, the woman is clearly well-born—or was, for her throat has been slashed.
A lesser man would smell danger, but Christian is determined to follow his fortunes wherever they may lead. He quickly finds himself entangled in the machinations of several ruthless courtiers, and before long he comes to the attention of the Emperor himself. Rudolf, deciding that Christian is that rare thing—a person he can trust—sets him the task of solving the mystery of the woman’s murder. But Christian soon realizes that he has blundered into the midst of a power struggle that threatens to subvert the throne itself. And as he gets ever nearer to the truth of what happened that night in Golden Lane, he finally sees that his own life is in grave danger.
From the spectacularly inventive Benjamin Black, here is a historical crime novel that delivers both a mesmerizing portrait of a lost world and a riveting tale of intrigue and suspense."

I'm not usually drawn to stories in which the main plot is often started by a murder, but all of the aspects of this novel -- the sixteenth century setting, Christian being an alchemist, and the hint at power struggles throughout -- completely draws me in. I'm looking forward to see what this book is all about

Never miss a post of bookish fun by subscribing to Forever Lost in Literature!
Posted by Jordan @ForeverLostinLiterature at 7:05 AM