To commemorate today's fun holiday, I have chosen to feature some of my personal favorite monsters from fiction. To be honest, I had to cull a lot from this list to make it somewhat manageable, so just know that there are many more awesome monsters out there. Some of these monsters I personally like because of how badass or crazy they are, while others are on here simply because I think they're extremely terrifying and I respect them, but I would never go near them (actually, who would go near any monsters anyway if you're not a book's protagonist!?)

Note: There will be no monsters of the spider variety here. Spiders are bad enough when they are the size of my thumbnail, I do not need to see them any larger than that. Ever. 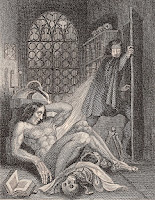 Image:  Illustration from the frontispiece of edition published by Colburn and Bentley, London 1831. 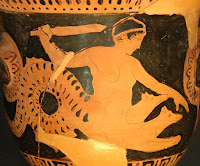 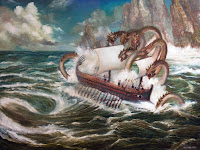 I'm only including a few mythology-based monsters in here because I plan to do a full-scale mythology-monsters post in the future, but how could I not include Scylla? Just take a look at this excerpt from The Odyssey:
"Verily she has twelve feet, all misshapen, and six necks, exceeding long, and on each one an awful head, and therein three rows of teeth, thick and close, and full of black death. Up to her middle she is hidden in the hollow cave, but she holds her head out beyond the dread chasm, and fishes there, eagerly searching around the rock for dolphins and sea-dogs and whatever greater beast she may haply catch" (The Oddysey 12.86-90).
Yep, I'm out!

Images:  (Left) Detail from a red-figure bell-crater in the Louvre, 450–425 BCE; (Right) Image from PinkParasol

Don't you even try to tell me that Fenrir is not completely badass. Fenrir is a huge, monstrous wolf from Norse mythology who is foretold to eventually devour Odin. You can find out more about that whole story in tales from Norse Mythology, but I wanted to briefly include him here. I'm also a fan of the fact that J.K. Rowling created Fenrir Greyback in the Harry Potter books, because I thought he was interesting in a horrible way and I can only assume tat he is named after Fenrir from Norse mythology.

The Jabberwock is a seriously ugly beast found in Lewis Carroll's Alice's Adventures in Wonderland. It has one of those faces that just instills fear and terror the second you look at it and I would never want to come face-to-face with it. I honestly think the Tim Burton movie did a great job depicting the Jabberwock in all of its terrifying glory.

The Other Mother from Neil Gaiman's Coraline isn't strictly your typical monster, but... she's a pretty terrifying and monstrous woman. The Other Mother is one of those figures that doesn't immediately appear threatening, but it is only through a vague feeling and certain tells that you can see that they are pure evil... until the true appearance comes out. 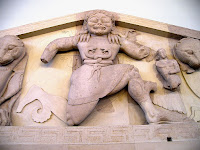 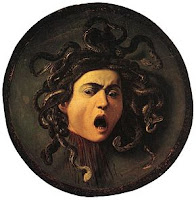 Okay, last one from mythology, I promise. Medusa is the epitome of a badass Gorgon woman. Besides the fact that she has snakes for hair, let's talk about the fact that if you look into her eyes for even a moment you will be turned to stone. All that sappy 'gazing lovingly into your lover's eyes'? Yeah, imagine if you just froze when that happened, and not out of pure adoration. I love Medusa-inspired characters and retellings, so if you ever come across any of those, feel free to send them my way!

Image: (Left) Medusa depiction on the west pediment at the Temple of Artemis, Corfu; (Right) Portrayal by Caravaggio (1597)

These bad boys are from Tolkien's insanely brilliant mind and they're, you know, sort of terrifying. Balrog appear in The Lord of the Rings trilogy. They're constantly burning, they have a flaming sword and weapons made of lava, and they're just altogether menacing creatures that I'd rather not meet, thank you very much. It doesn't help that they are huge-- one of them even destroyed the underground mine of Moria, where some dwarves initially lived.

Image: Still from The Fellowship of the Ring movie.

Also:
The Retchwyrm from Godsgrave by Jay Kristoff- I couldn't find any fanart images of the Retchwyrm (how about an illustrated of the book, eh? Get your red ink!), but it sounds horrible. Besides the fact that this is basically a giant, ugly, horrendous worm, the worst is that it literally spits its stomach out to capture prey, then sucks it back in with its victims caught inside. Yeah, no. Thanks for the nightmare, Jay.

Most monsters from The Witcher by Andrezej Sapkowski - The man is basically a monster slayer, so it's safe to say that most of those monsters sound horrifying. Some aren't so bad, but let's be honest--I don't want to meat any of them!

Sranc from R. Scott Bakker's Prince of Nothing - I almost didn't include these guys because of just how deplorable they are, but they are probably one of the ones on this list I'd be most afraid of. They're basically driven by a desire for sex and violence, and it's not great. 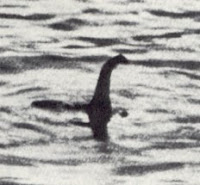 The Loch Ness Monster! Nessie is by far my favorite legendary monster. Look, I don't care how silly it is or whether you believe she's real or not, I am a huge Nessie fan and I always will be.

What are some of your most feared or most loved monsters from fiction?