Race to the Bottom of the Sea by Lindsay Eagar

*Race to the Bottom of the Sea will be released Tuesday, October 10th!* 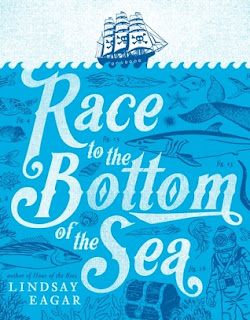 Pirates, ships, and adventures on the open sea—Race to the Bottom of the Sea embodies every single one of those elements (and so much more!) and is an action-packed adventure that is a blast to read.


Despite its fun, adventurous aspect, Race to the Bottom of the Sea does start out with a fairly grim beginning when eleven-year-old Fidelia's parents are both killed in a storm while studying out at sea in a device that she invented. I'm always a bit hesitant these days when books use the death of a main character's parents as a starting off point for the story, but I'm glad I decided to read this one. Lindsay Eagar handled the entire situation with skill and a sincere nod to the feelings and struggles that any genius eleven-year-old inventor would have when she is suddenly left without the most important people in her life.

Fidelia is a confident, strong-willed character that I think is a great example for kids everywhere. Fidelia is an inventor and is, as expected, incredibly smart—and she complete owns this. She knows exactly who she is and she's not afraid to back down from those who look down on her because is both young and a girl.  I also loved how supportive and engaging her parents were with Fidelia and her endless array of ideas; they knew that she was a capable and extraordinarily knowledgeable girl and they boosted her up as much as possible.

Despite how strong and determined Fidelia is, she's not without her flaws, which of course only endear her to me more. Fidelia is sometimes too confident in her abilities and this also lends to her occasionally speaking out to figures of authority or who power over her when she probably shouldn't. But this is also what makes her so impressive.

This book really picks up when Fidelia is kidnapped by the infamous pirate Merrick the Monstrous, a classically formed pirates who adds so much excitement to this book. Merrick is a pretty merciless guy, but he has a fascinating backstory that really gives motivation to his actions and his current personality. Although the story  is mainly told through Fidelia's perspective, there are many flashbacks that provide insight into other characters and their backgrounds, such as Merrick himself.

There are quite a few supporting characters that we are introduced to as well, and I honestly felt a bit overwhelmed by them for a small amount of time when they were first introduced, but eventually I figured out who was who and everything was smooth sailing once again from that point.

Eagar has a flowing, highly entertaining prose tat is both accessibly and engaging. She explains things about the ocean and the knowledge that Fidelia has in such a way that I am able to fully understand it and also enjoy learning about it. An interesting point to note about this book is that the setting itself isn't ever clearly presented. It seems semi-modern at times, but there are plenty of historical influences as well, and the places mentioned are not (as far as I know) real, so there is that element of being completed transported to another world.

Overall, I've given Race to the Bottom of the Sea four stars! I loved the inventive trait of Fidelia, the adventure on the high seas, and, of course, the pirates!

You might also like:
Over the Underworld by Adam Shaughnessy
The Secret Keepers by Trenton Lee Stewart
Impyrium by Henry H. Neff

Posted by Jordan @ForeverLostinLiterature at 6:59 AM