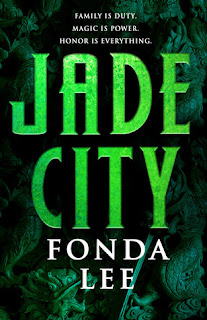 Well this was a fascinating debut fantasy concept! Fonda Lee says that she credits much of the inspiration for this novel to her love of kung fu movies and mafia stories combined with her interest in enhancing the physical powers of people, and that inspiration definitely shows! All of those elements have combined to create this intense political family saga known as Jade City.

Jade City is, at its core, very much about family, duty, power, and how all three of those things work both with and against one another. I loved the rival dynastic family aspect and how Lee constructed such an intricate network of familial ties--both those forged by blood and those sworn by oath-- and relationships in many different ways. There are a certain number of clans that rule the area that this book takes place, and the two biggest--the Mountain and No Peak--seem to reach the pinnacle of their rising tensions in this book.

Jade City is set in a modern Asian-inspired urban setting that I found particularly unique. The world-building itself is impressively detailed and completely dragged me in. The entire concept of jade enhancing the abilities of certain individuals was fascinating and truly laid the foundation for an engrossing fantasy conflict. I think what really impressed me about this world was how Lee took regular ideas, such as certain objects giving people power and having a somewhat modern setting, and formed them into something wholly exciting and brand new.

Where Lee truly excels is in her character development. Each main character was given such a strong background history and personality that I felt as if they were real people. I also appreciated how she managed to provide the history about each character without resorting to straight-up info-dumping; rather, she slowly released information through certain events or conversations with others. Jade City is told from the main perspectives of Lan, the Pillar ( aka leader) of the No Peak clan and elder brother, Hilo, the Horn (akin to an enforcer figure) of the No Peak clan and younger brother, Shae, the sister, and Anden, a boy essentially adopted into the family. I found Shae and Hilo's perspectives and overall story to be the most interesting, as they seemed to have the most in-depth development and changes compared to the others. The interactions among this family group are often tense, but always honest and occasionally brutal. At the root, however, is an obvious loyalty and willingness to defend each other to the death if needed.

There's not much mercy or slack given in this book, either, which lent itself to a somewhat relentless plot and easily kept me hooked. Each character is expected to uphold certain traditions or take on certain tasks, and well, that's just how it is. No matter how much one might try to get away from their duty, it somehow drags them right back into.

There is a lot of political maneuvering and discussion, and sometimes I found the internal dialogue of various characters a bit tedious. I enjoyed being privy so much of their insight and thought process, as it really helped to develop and make them more three dimensional, but it also seemed to drag on for just a little too long. This made a few minor areas of the book seem to also drag, but these moments were generally brief and it wasn't long before I was engaged in the story once again.

Overall, I've given Jade City four stars! I really cannot wait for the next installment.

*I received a copy of Jade City courtesy of Orbit books in exchange for an honest review. This has no effect on my rating of the book.*