Then She Was Born by Cristiano Gentili 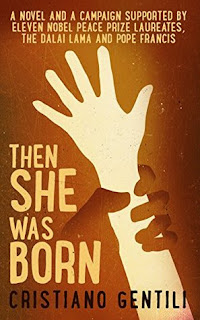 Then She Was Born by Cristiano Gentili. #HelpAfricanAlbinos, 2017. Ebook. 309 pages.

It's not easy to find a good starting ground to begin discussion of Then She Was Born, a novel meant to raise awareness about an injustice and horrific issue that is all too common in certain parts of the world and is supported by both the Dalai Lama and Pope Francis.

Then She was Born is about a young girl named Adimu who born to a couple in Tanzania. She is perfectly normal--except, of course, for the fact that she is born albino. In this culture, albinos are viewed in a highly superstitious manner as evil omens and harbingers of bad luck; in fact, most albino babies are simply killed. Adimu, however, is saved by her grandmother, Nkamba, who proceeds to raise her as her own child.

This is a novel about ignorance, struggle, superstition, greed, and how all of those things combine to create a toxic and dangerous environment. There is much to learn from these pages, and I think Gentili did a wonderful job of conveying the struggles faced by albinos and their inability to be accepted in some societies. This is certainly an issue that I don't think many people are aware exist, and I can wholeheartedly say that I think this book does a great job of portraying the issue in a well-rounded and informative manner.

I found the plot itself a bit lacking at times and wished that there had been slightly better pacing to keep my interest up. Although the topic and overall story is eye-opening, the story itself still needed to be engaging enough to make me want to keep reading, and there were times when I wasn't as compelled to keep reading as I would have lied to be. I also would have liked to see Gentili discuss how the tribes themselves could work to change their attitude towards albinos while still maintaining many of their own unique cultural attributes, rather than focus solely on using Western science. Despite this, I still found Then She Was Born to be a good story overall that entertained and informed at the same time.

Overall, I've given Then She Was Born four stars! This is an incredibly important and informative book that does indeed bring much awareness to this vital human rights issue.

You might also like:
The Chibok Girls by Helon Habila
Confessions of an Accidental Zoo Curator by Annette Libeskind Berkovits

Posted by Jordan @ForeverLostinLiterature at 7:48 AM

Email ThisBlogThis!Share to TwitterShare to FacebookShare to Pinterest
Labels: book review, bookreview, cristian gentili, review, then she was born