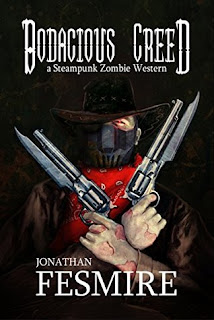 Bodacious Creed is pitched as a steampunk zombie western. You're probably thinking that sounds like a pretty crazy combination, right? If you are, I thought so too (and if you aren't thinking that, then I'd like to hear what sort of books you typically read). Now, I've never really read a Western, I've only read a small handful of steampunk books, and I also don't typically like zombies. So why did I decide to read it? Because sometimes there are things that just sound so unique you have to try it out--plus, almost all of the reviews for this book on Goodreads are exceedingly positive, so I thought there was a pretty good bet that this would work out, so I took the chance. And you know what? It was amazing!

I'm honestly not even sure how to start talking about this book. Everything about it was so unexpected for me, so I'll just dive in headfirst. First, let's talk about the Western/steampunk setting mix. I personally think that Fesmire did a really skillful job meshing these two ideas into something oddly yet incredibly authentic and interesting. Despite how unlikely it seems to have such advanced technology in the 19th century, Fesmire makes the mechanics and technology so realistic and compelling to read about. It's this sharp dose of steampunk that actually made this book have such a strong sense of realism and plausibility.

The main characters are Anna Lynn Boyd and Marshal James Creed, both of whom were really well-written characters. Anna is the madam of a bordello in the town of Santa Cruz, a place where she offers women a chance to make fair work and live a semi-safe and comfortable area. Anna is a really great character overall: shes intelligent,  has common sense, and she's an incredibly hard worker, something that I always admire in a lead character. She also always seems to be one step ahead of people and has a keen mind for business and, of course, for her technological pursuits, which are among the best in the nation. Marshall Creed is another interesting character that brought so much to the book through his forceful yet endearing demeanor. He's a thoughtful man who doesn't necessarily want all of the attention that is given to him, but accepts it all the same and tries to live normally. He does his best to always help out those who need it, but most importantly he hunts criminals that are causing the most trouble to the average citizen.

The rest of the characters portrayed in this book are all equally well-done. There is a small, rather pleasant variety of villainous characters--such as Corwin Blake, a man on the run--that are all very different in personality, as well as characters that are more 'grey' and don't have as defined roles as others, which I think added a lot to the book. I also particularly liked Anna's lover, Jonny, who is unable to speak but still proves to be an incredibly prominent and intriguing character who plays an extremely important role in Anna's life.

The zombie aspect of this book (the part that I was most skeptical about) comes into play when Anna uses her immense knowledge of this steampunk technology to bring him back to life-- and don't worry, this is all in the synopsis, no spoilers. When I think of the stereotypical zombie, it's usually the cliche'd idea of mindless drones that 'must eat brains,' which is what generally turns me off from them. Well this isn't like that at all. This is a much deeper, more nuanced and interesting way to portray zombies and explores the idea of having this new technology and the ramifications of bringing people back from the grave. The trouble comes when the antagonist of this book, who shouldn't have that type of power, gets ahold of the technology begins to use it less skillfully and for more nefarious purposes.

Fesmire has truly created a strong world that felt incredibly real and was full of colorful characters. There is a great balance of action and plot, which is important to the success of any entertaining novel. The action is well-written and kept me hooked on the page, and the areas that were slower and focused more on plot and character development were just as appealing. This is a book that handles a lot of interesting ideas, such as expanding technological abilities and determining good vs. 'evil' people, and I think Fesmire did a really good at combining all of these aspects to create a entertaining story.

Overall, I've give four stars to a book that I had no idea I would enjoy as much as I did! If you like steampunk books, zombies, or western, go check this one out! If you're ambivalent to all of those things, but still want to try something new--check this one out!