The Wisdom of Wolves by Jim & Jamie Dutcher: Review + Interview with the Authors!

Hi everyone! Today I have an extremely special post to share with you featuring a short review The Wisdom of Wolves by Jim and Jamie Dutcher, followed by an interview both Jim and Jamie!


*The Wisdom of Wolves is out Tuesday, March 6th!* 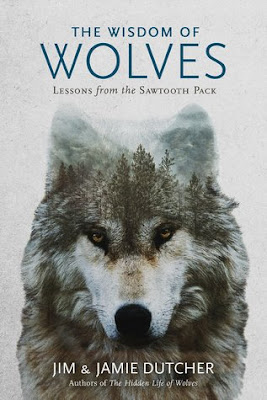 For six years, Jim and Jamie Dutcher lived on the perimeter of Idaho's Sawtooth Wilderness with a pack of wolves known as the Sawtooth pack in order to observe the movements, behavior, and social lives of wolves. The couple gained the trust of the wolves and used their studies to share the beauty and significance of wolves amidst the prevalence of much rising anti-wolf sentiment and negative imagery often associated with wolves. In their book, The Wisdom of Wolves, Jim and Jamie share the many important lessons and values they learned from wolves while observing them in their daily lives.

I have a very special relationship the work of Jim and Jamie Dutcher and the Sawtooth pack, as I grew up with a mother and grandmother who both love wolves and supported their work. When I saw this book, I knew I had to read it, and I am so grateful that I had a chance to read and review a copy!  I had such a wonderful time reading this book and it turned out to be one that I could not put down. The Dutchers are both incredibly eloquent with their thoughts and convey such striking, sincere emotion when discussing both the wolves themselves and lessons they have learned from the wolves.

Each chapter focuses on a different 'lesson' that we, as humans, can learn from wolves. Within each chapter the Dutchers include anecdotes about wolves from the Sawtooth packs, wolves from other locations, and even from individuals involved in wolf protection and research. I found each chapter so enlightening and meaningful, and I feel as though I learned more about life from this short book than I have in a long time. Many of the stories and bits of wisdom shared were heartwarming, some heartbreaking, but all inspiring. I may or may not have even found myself tearing up at more than a few of their stories.

Throughout the book, the Dutchers introduce their readers to the many distinct individual wolves that make up the Sawtooth pack, such as the alpha male Kamots, the alpha female Chemukh, the omega Lakota, and all the rest. My favorite part of this book was reading about how all of the wolves lived together, worked together, and how truly distinct each one's personality was. This book is also incredibly instructive in the different roles each pack members plays and how they all contribute to the whole.

Overall, there's simply no way that I could give this book anything less than five stars. You can also find out more about the work the Dutchers have done (and continue to do) at their website, Living With Wolves. 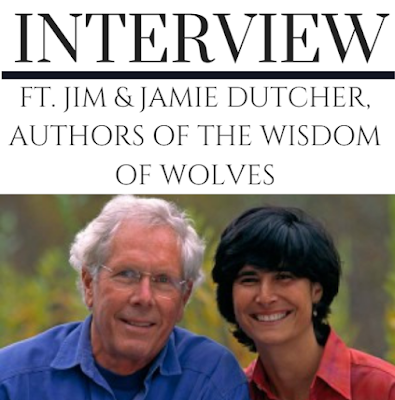 1. While reading The Wisdom of Wolves, I was blown away by your experiences and how much you both seem to have gained from completing this project. How did you go about writing this book--was it something that you have been working on for a while? What made you decide to write it in the format that you did (such as in lessons from them, rather than just sharing experiences)?

This book project was a labor of love. It had been germinating for quite a while. Our previous book, The Hidden Live of Wolves with National Geographic, focused more on the stories of our time with the wolves. After the book was published, our editor, Susan Hitchcock, asked us if we would like to write a book on what we had learned personally from wolves, what they had to teach us? This was different from anything we had done before. Now we could really explore what we had learned from wolves, how watching and learning from them could, in a way, make us better human-beings. We may not be related DNA wise, but we do live our lives in very similar ways- we both care, are passionate, practice devotion and cooperation, experience grief, and care for the young and the old. These are lessons to be learned and held close rather the just the sharing of experiences.

2. My introduction to the Sawtooth pack and your work started when I was just a young child due to the fact that my mother was a huge admirer of wolves and your work. Her mother had actually gifted her with an 'adoption' certificate for Amani in the late '90s, and that was what really kickstarted our following of your work and the Sawtooth pack. I grew up with large poster prints of the Sawtooth pack posted on the walls of my mother's office. Since then, we have followed your work and the Sawtooth pack. We got to meet Amani quite a bit in The Wisdom of Wolves-- is there anything else you can tell us specifically about him and his role in the pack or how he interacted with either of you? I loved hearing about his interactions with the pups.

Wow, three generations of Sawtooth Pack followers… that’s terrific! Wolves need more friends like your family! Besides Amani being a truly beautiful wolf, he did have a bit of a duel personality. But then a lot of people are like that as well. Amani was one of the mid-ranking wolves, below the beta (second in command) and above the omega (lowest in the pack order and often picked upon). Mid-ranking wolves sometimes squabble amongst themselves for a higher position within the mid-ranks. Amani would often spend time dominating his brother, Motomo, but when it came to meal time, Motomo often won out! Amani could be a bully and a clown. He was often the one to most often pick on Lakota the omega, but went it came to the pups, Amani was all “goofiness!” He was their total playmate. He would often throw himself into the pile of pups, lying on his back, while the pups pulled his ears, tail and paws as if they were trying to take down a bull moose! Amani would just lay back and take it, he loved it!

As far as his interactions with us, Amani could be a bit of a showboat. Even though we lived with the wolves and they were comfortable with us, we would never try to go up to them and initiate interactions. Everything had to be on their terms. They could come up to us if they chose to but not the other way around. If one of the wolves came up to us, Amani suddenly had to be there, almost as if he was afraid he was missing out on something and the attention had to be turned towards him- almost like a child needing attention.

3. The most striking thing about the wolf pack is how much of a family that they truly are. Was there any particular relationship/dynamic among two or three specific wolves was particularly interesting or stood out to either of you?

One of the most special relationships between the wolves was with Matsi the beta wolf and Lakota the omega. Lakota was often picked on and used as a scapegoat. However Lakota has a special role to play within the pack; he was the instigator of play and he used play to defuse pack tension. It was during times like these that the rest of the pack could sometimes become aggressive with the omega, though rarely does the omega get truly hurt. We started to notice at these times that Matsi would actually insert himself into the frey and actually body check the aggressors, so Lakota could slip away! Matsi and Lakota also slept next to one another and would go off and play and explore together. With Matsi, Lakota was free to do things he would never have done with another pack member. Lakota would never have jumped on the back of a pack mate- but with Matsi, he felt more empowered. Matsi really helped release Lakota from the burden of being the omega. We even wrote an National Geographic children’s book, A Friend for Lakota, the True Story of a Wolf Who Braved Bullying. The friendship between Matsi and Lakota showed us how truly important the bonds between wolves are, and reminded us again, how we can be better at being human by learning from them.

4. It seems as though there are endless things that we can learn from the leadership and actions of wolves--the loyalty, the camaraderie, the togetherness, the way they learn their roles to be successful--what is the most important thing that you think humans can learn from wolves? Is there one thing that you most want people to come away with from reading this book?

We believe the single most important thing humans can learn from wolves is how much they deeply care for one another and how they forgive. Humans tend to forget that we are part of the natural world. Our lives are so much richer when we listen to what the wolves have to teach us.

5. Lastly, for people reading this who have not had much introduction to the lives of wolves, the Sawtooth pack, or your work--where would you advise them to start if they would like to learn more? How can we all best support your work and the livelihood of wolves?

We encourage people to learn as much as they can about wolves. In 2006 we chose to put down our film gear and start a non-profit organization, Living with Wolves. We felt that the wolves of the Sawtooth Pack had given us so much personally and they were the ambassadors for their wild brethren. We knew we couldn’t move onto another subject; we needed to continue to speak for wolves- - - they were still so misunderstood. Living with Wolves is dedicated to educational outreach and dispelling the myths of wolves. We work to find successful solutions for ranchers and wolves (and other predators) to coexist peacefully. Among other projects, we sponsor research in Yellowstone, Denali and Grand Teton National Parks.

Besides our books and DVD’s we welcome everyone to visit our website, www.livingwithwolves.org or visit our Living with Wolves Facebook page or on Twitter (@LWWolves) to learn more about wolves. We also have a teaching guide (grades K-12) and family guide produced in conjunction with National Geographic’s education department. You can also help us advance our work by making a tax deductible gift and become a part of the important work we are doing! Our work can’t happen without your support!

Huge thanks to the National Geographic Society for giving me the opportunity to read and review this book, as well as interview the Dutchers. And of course even more thanks to Jim and Jamie Dutcher for taking the time to answer my questions!

*Photo of Jim and Jamie from their website, Living With Wolves.

Posted by Jordan @ForeverLostinLiterature at 7:19 AM