*Wayfarer will be released Tuesday, May 8th!* 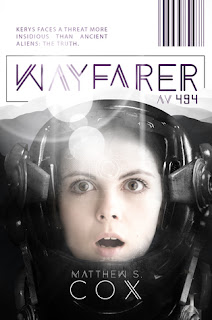 This book was... insane. I haven't been that 'on the edge of my seat' in quite a while. If you like foreign planet/space thrillers, then this one's for you.

In Wayfarer, Kerys Loring jumps headfirst for the opportunity to explore an alien ruin on a foreign planet. Once there, however, she is shocked to discover that her ex is also stationed on the planet, an issue that takes the backseat when an extreme unknown alien threat takes over and plunges the base in chaos.

Wayfarer was a little slow at the outset and I wasn't sure if it was going to pick up enough to keep me fully interested. I'm here to tell you not to worry about that because boy, does it pick up! I loved the basic premise of simply exploring a new planet for potential alien life and that is what initially hooked me. And then, for lack of a better phrase, the shit hit the fan and things went crazy. I had no idea what was going to happen in this book and I don't want to tell you anything about it other than to say things get dark... and stay dark.

One thing that I didn't love about being caught so unawares was how blindsided I was to the immense violence and gore that occurred throughout the events of this book. I don't usually have a problem with violence and gore (I mean, I love grimdark books), but this was just so unexpected for me and done in such a real and relevant way that it really shocked me and sort of threw me for a loop. If you're okay with some violence then you'll be fine, but if you're really sensitive to violence then you might want to consider that before picking this one up.

I'm not sure how much else I can really say about the plot without giving away anything important, so I'm going to jump into talking about some of the characters and the writing. Our main character is Kerys, a young woman who is beyond thrilled to have an opportunity to be a part of history and explore this new planet and newly discovered alien activity. Kerys is, overall, a very bright and interesting character, but I found it hard to connect with her at times. This doesn't really pose as a huge issue for me because I don't always need to connect with a character, but I just felt like some of her actions were a bit odd at times. For being as bright as she was said to be, I found her lack of common sense and lack of inquisitiveness about questionable things a bit annoying. There were certain things that I was surprised she didn't question more and that she brushed off too quickly and I found myself wanting to yell at Kerys on more than one occasion for different things she did or didn't do. Despite this, I was still very much captivated by her strength and determination; she has learned not to sit back and let things happen to her, but instead sticks up for herself and tries to be a stronger person everyday.

There was a decent variety of supporting characters in this book as well, though I never really felt like I got to know any of them very well so I don't really have all that much to say about them. One of the other prominent characters in this book is Kerys' ex-boyfriend, Will, someone she was horrified to find already on the base at the planet due to a previous abusive relationship and not-so-great break-up back on earth. I'll be honest an say that I did have my misgivings that this ex-boyfriend aspect would overtake the book in a negative way, but it actually didn't and instead ended up taking a very interesting turn. I felt the other characters were oddly interested in their past relationship (no one usually cares that much), but it didn't bother me too much. I wish I had known the other characters a bit more so I could separate who was who more easily, but they still added some great personality to the story.

The writing itself was pretty well done an captured the horror and suspense of the situation on the base. The only issues I had were with the dialogue itself, which just sometimes felt a bit stilted and awkward. Some of the responses and conversations people would have just felt a little bit off and pulled me slightly out of the action of story a little as well.

Overall, occasional issues with the writing and pacing aside, I definitely enjoyed reading this crazy and unpredictable book and have settled on four stars, rounded up from 3.75. If you like thrillers and space and a gripping story, then definitely pick up Wayfarer.


*I received a copy of Wayfarer courtesy of Curiosity Quills Press in exchange for an honest review.*

You might also like:
One Way by SJ Morden
Security by Gina Wohlsdorf
Illuminae by Jay Kristoff & Amie Kaufman