Summer Reads Mini-Reviews (Pt. 1 of ?): You Were Made for This by Michelle Sacks & The High Season by Judy Blundell 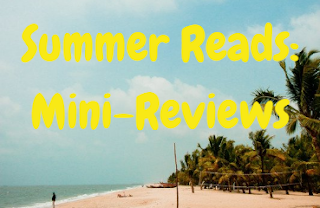 I've never really been one to read with the seasons much (with the exception being some Halloween/winter reads), but this summer I just got the urge to read some page-turning summer thrillers, especially those domestic ones that you can just eat up like chips (the best way!). I've read two so far, both of which were sent to me for reviews, so I figured I'd go ahead and get out some mini-reviews. You Were Made for This was sent to me courtesy of Little Brown and Lauren Passell and The High Season was sent courtesy of Random House, so huge thanks to everyone!

You Were Made for This by Michelle Sacks
Little, Brown and Company, 2018
Hardcover. 352 pages.

So this book... wow, I don't know where to start. It is far, far darker than I imagined. It's such a subtle book that presents such a lovely, innocent facade, but from the very beginning you can just sense that there is something much worse going on. You Were Made for This is the story Merry and Sam, a married couple with a new baby who have upped and moved to Sweden, where they find it to  be perfect, absolute bliss and far superior to living in the United States. Of course, things are never quite what they appear, as the reader soon discovers. However, before getting into the rest of the review, I want to give a brief content warning. The content warning does have some potential spoiler content as well (nothing major, but there are some important plot points), so I'm putting it under a spoiler tag just in case.
Child abuse/neglet does play a fairly significant role in this book, so please be aware of that before going into it. I know this can be an extremely sensitive topic for people and I just want to make sure that's out in the open. It's written in a someone normalized manner at times and used in ways that may be quite bothersome.


What hooked me from the beginning was just how incredibly subtle everything was. A slightly passive remark here, a backhanded word there, statements that seem normal on the surface, but hint instead at so many more problems. There are strong, problematic gender roles at play, misogyny, stereotypes, secrets, abuse--really, this book is full of pretty bad things, but it's told in such a mesmerizing manner that I just could not put this book down, even when I wanted to.

I ended up giving this book four stars for a couple reasons: 1) As I mentioned, I couldn't put this book down. Despite how horrible it was at times content-wise, it was seriously gripping and I couldn't stop reading it. 2) Sacks includes so many random details or offhand remarks that have such a huge, symbolic impact and make this novel one that has a lot of literary appeal. I'm not sure if Sacks has written much before, but I would say she has a bright future ahead of her. I'm hesitant to recommend it, but if you love some dark domestic thrillers, then go forth!

If you don't like books that much on the darker side, then The High Season might be more up your ally. There are still plenty of secrets and drama, but it's on a much less dangerously sinister note and more of a normal, 'people just suck' note. This felt like much more of a fitting summer read since the story itself also takes place during the summer a privileged location not unlike the Hamptons.

This book doesn't particularly stand out as any great novel of the year, but it has a very solid and entertaining plot that kept me interested. There is a surprisingly large cast of characters that required me to really focus and try to remember who was who, but I was pleased by how distinct each character was overall. Blundell does a wonderful job portraying the distinctions between different classes and how people act and are treated depending upon their upbringing and current standing. That is one particular area where this book really excelled, in addition to adding depth to every aspect.

Another thing that I really liked was Blundell's writing itself. She takes a seemingly simple story of privilege and drama and turns it up a notch by inserting some truly significant observations and commentary about life and the world. No  matter what happens or how foreign a situation it might be to whoever is reading the book, there was a certain level of grounding that brought it all together with familiar themes and ideas, and it also allowed for a certain level of understanding regarding every character in the book, no matter how much one might like or dislike them.

Overall, I feel like this book is somewhere between three and four stars, so I'm deciding to be generous and just leave it at four for now. This is the perfect summer read to satisfy your craving for a solid plot, interesting characters, and writing with a bit of meat to it.

Buy the book: Amazon | Book Depository
Posted by Jordan @ForeverLostinLiterature at 7:14 AM

Email ThisBlogThis!Share to TwitterShare to FacebookShare to Pinterest
Labels: book review, judy blundell, michelle sacks, the high seaon, you were made for this