Can't-Wait Wednesday: Kingdom of Needle and Bone by Mira Grant & The Paragon Hotel by Lindsay Faye 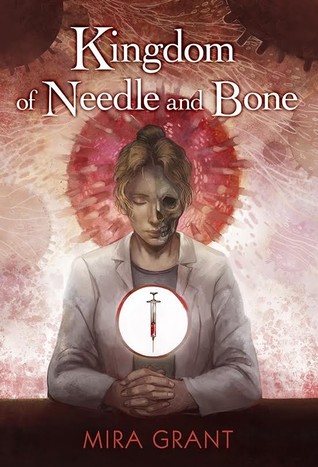 "We live in an age of wonders.

Modern medicine has conquered or contained many of the diseases that used to carry children away before their time, reducing mortality and improving health. Vaccination and treatment are widely available, not held in reserve for the chosen few. There are still monsters left to fight, but the old ones, the simple ones, trouble us no more.

Or so we thought. For with the reduction in danger comes the erosion of memory, as pandemics fade from memory into story into fairy tale. Those old diseases can’t have been so bad, people say, or we wouldn’t be here to talk about them. They don’t matter. They’re never coming back.

How wrong we could be.

It begins with a fever. By the time the spots appear, it’s too late: Morris’s disease is loose on the world, and the bodies of the dead begin to pile high in the streets. When its terrible side consequences for the survivors become clear, something must be done, or the dying will never stop. For Dr. Isabella Gauley, whose niece was the first confirmed victim, the route forward is neither clear nor strictly ethical, but it may be the only way to save a world already in crisis. It may be the only way to atone for her part in everything that’s happened.

She will never be forgiven, not by herself, and not by anyone else. But she can, perhaps, do the right thing.

We live in an age of monsters."
I've really enjoyed what I've read from Mira Grant/Seanan McGuire, so I'm ready to check out even more! This sounds like it will be pretty horrifying because Grant is often known for the detail and authenticity that she adds because of her research, which makes something about a disease outbreak sound particularly frightening.

"The new and exciting historial thriller by Lyndsay Faye, author of Edgar-nominated Jane Steele and Gods of Gotham, which follows Alice “Nobody” from Prohibition-era Harlem to Portland’s the Paragon Hotel.

The year is 1921, and “Nobody” Alice James is on a cross-country train, carrying a bullet wound and fleeing for her life following an illicit drug and liquor deal gone horribly wrong. Desperate to get as far away as possible from New York City and those who want her dead, she has her sights set on Oregon: a distant frontier that seems the end of the line.

She befriends Max, a black Pullman porter who reminds her achingly of Harlem, who leads Alice to the Paragon Hotel upon arrival in Portland. Her unlikely sanctuary turns out to be the only all-black hotel in the city, and its lodgers seem unduly terrified of a white woman on the premises. But as she meets the churlish Dr. Pendleton, the stately Mavereen, and the unforgettable club chanteuse Blossom Fontaine, she begins to understand the reason for their dread. The Ku Klux Klan has arrived in Portland in fearful numbers–burning crosses, inciting violence, electing officials, and brutalizing blacks. And only Alice, along with her new “family” of Paragon residents, are willing to search for a missing mulatto child who has mysteriously vanished into the Oregon woods.

Why was “Nobody” Alice James forced to escape Harlem? Why do the Paragon’s denizens live in fear–and what other sins are they hiding? Where did the orphaned child who went missing from the hotel, Davy Lee, come from in the first place? And, perhaps most important, why does Blossom DuBois seem to be at the very center of this tangled web?"
I love a historical thriller, I've heard good things about Lindsay Faye, and this just sounds really interesting! I hope to have a chance to check this one out.

Posted by Jordan @ForeverLostinLiterature at 6:45 AM