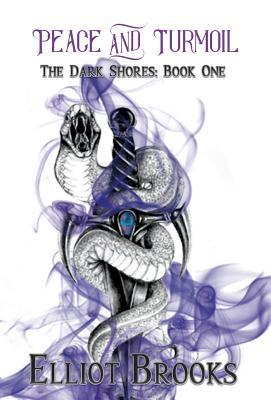 About Peace and Turmoil:


"Thirty years of peace have graced the lands of Abra'am. The waning bloodshed from the War of Fire has ended, and the new generations have only the horrid tales of their forefathers to remind them of their countries' pasts. Poverty no longer prevails, the sights and palms of men have grown soft, yet four nations dictate more power than they know. Civil unrest stirs amongst the first, the heir to the throne of Mesidia and the Guardian to its Dagger questioned by a growing rebellion. To its south lies a country of scholars, the mighty nation of Xenith, liberators of the War of Fire and Guardians of the Amulet. Over the Dividing Wall lives the newly freed Sadie, a kingdom with an assassin for a prince and an insurgence at its heels. The fourth is the ancient realm of Eve, the Land Across the Sea, gifted and cursed with the Sight as it shows them what's to come.

Only one knows the fate of the world, but all will be pawns in its reckoning."

**Full disclosure: I was an early beta reader for this book during the first round of beta reading. I have also since read the finished edition, which has undergone edits, and have formed my opinion around that reading experience. This affiliation has no effect on my honest opinions of the book and I was not asked to write a review, but I want to make sure my relationship to it is clear.

Peace and Turmoil is the start to Elliot Brooks' new epic fantasy Dark Shores series, and 'epic' is the perfect descriptor for it. This is a solid debut that will satisfy any fantasy lover, whether you're looking for engaging characters, political intrigue, a unique magic system, or strong world-building--it's all here. This book also have a very 'classic' epic fantasy vibe, complete with kingdoms and royalty and magical beings.

Peace and Turmoil tackles a lot of different things (which is partially why it's 700+ pages, I assume): family dynamics, political intrigue, social and romantic relationships, struggles with magic, and nearly constant epic stakes. The author introduces readers to a complex and expansive world that covers various kingdoms, and I felt the world-building itself was really well done. Brooks takes plenty of time to address the layout of the world, the history of each kingdom--including past wars and current tensions--and the physical environments of locations as well. She also spends time touching on the social classes and structure of the different societies, which I think added some great depth, as well as a good deal of lore and background that enriches the world and allowed it to feel more authentic.

The story follows a rather large array of character POVs throughout the book, starting off with only a few and slowly expanding until it's almost hard to keep track of everyone by the end. One of my favorite stylistic things that Brooks chose to do, however, was to include a small map location image at the start of each character's chapter. It's a little hard to explain without a visual to show you, but I thought this was such a nifty way to help readers like me visualize what land and location each character was currently in, as I tend to have difficulties with spatial visualization and things of that nature. It's a small touch, but it's one that made a big different in an epic fantasy with such a large cast. I also appreciated the artwork of the characters that appeared throughout the book, which was done in a manner that actually accentuated my own view of the characters and what to expect from them. And speaking of characters, the main ones we follow are Dietrich, X'odia, Gwenivere, and Roland, all of which I thought had strong development over the course of the story. Dietrich is probably my favorite of the bunch, but I was impressed by the developed personalities and relationship dynamics that each had.

The magic system is one of an elemental nature, and I thought Brooks had a great take on this classic style of magic. I can't fully explain how the system works in this review as it does get a bit complex, but the gist of it is that people can essentially see different auras that they basically absorb and are able to use. Of course, as with most things in life, too much of a certain aurors can be a bad thing, so it can be tricky to find a good balance. Although it took me a while to fully understand all of the rules associated with this magic system, I did still find it to be one of interest and with some really great ideas attached to it.

One of my favorite things about this book was all of the magical creatures, known as 'fiends,' that inhabit the world and play a role. Brooks included artwork of the different fiends as well and  incorporated excerpts of information about them at the beginning of some chapters, both of which I thought were a great touch. There are some traditional creatures, such as dragons, as well as some that are newly invented (as far as I know) by Brooks herself. Some people might not care about the different creatures in this book, but as a huge animal lover I am always looking forward to magical creates in fantasy.

I only have a few problems with this book and most of them lie with the pacing and abundance of chapters. The pacing is largely consistent, but it does sometimes feel as though there's an uneven balance between slow and fast pacing that made things a little difficult to get through at times. The chapters also vary quite a lot in length, and I found it difficult to stay focused when it would switch around between various characters too quickly. This isn't the most mind-blowing fantasy I've ever read, but for a debut it's incredibly promising and well-written, and I have very high hopes for Brooks' future work.

Overall, I've given Peace and Turmoil four stars! This is another great self-published fantasy that I would recommend to anyone who loves some epic fantasy, magical creatures, and a lot of political intrigue.

You might also like:
Furyborn by Claire Legrand
The Queens of Innis Lear by Tessa Gratton
Posted by Jordan @ForeverLostinLiterature at 6:49 AM