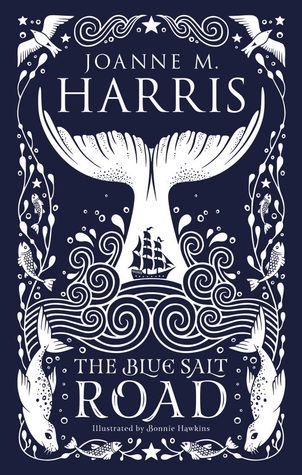 "An earthly nourris sits and sings
And aye she sings, "Ba lilly wean,
Little ken I my bairn's father,
Far less the land that he staps in.
(Child Ballad, no. 113)

So begins a stunning tale of love, loss and revenge, against a powerful backdrop of adventure on the high seas, and drama on the land. The Blue Salt Road balances passion and loss, love and violence and draws on nature and folklore to weave a stunning modern mythology around a nameless, wild young man.

Passion drew him to a new world, and trickery has kept him there - without his memories, separated from his own people. But as he finds his way in this dangerous new way of life, so he learns that his notions of home, and your people, might not be as fixed as he believed.

Beautifully illustrated by Bonnie Helen Hawkins, this is a stunning and original modern fairytale."
This sounds beautiful and magical and I'm really excited to check it out. I love that there are illustrations in this as well!

"In the tropical kingdom of Rhodaire, magical, elemental Crows are part of every aspect of life...until the Illucian empire invades, destroying everything.

That terrible night has thrown Princess Anthia into a deep depression. Her sister Caliza is busy running the kingdom after their mother's death, but all Thia can do is think of all she has lost.

But when Caliza is forced to agree to a marriage between Thia and the crown prince of Illucia, Thia is finally spurred into action. And after stumbling upon a hidden Crow egg in the rubble of a rookery, she and her sister devise a dangerous plan to hatch the egg in secret and get back what was taken from them."
I have a weird love for crows, so the fact that this has "magical, elemental" crows just calls out to me (or should I say 'caws'....I'll let myself out). I love a good sibling relationship, especially when it's two sisters looking to do something big. Can't wait to check this out!