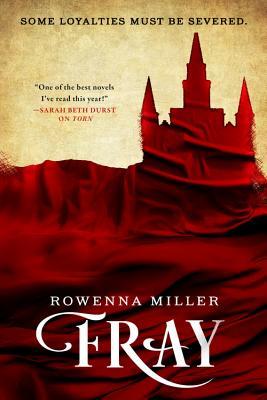 
"In this epic sequel to Torn, the magical seamstress Sophie Balstrade navigates a royal court and foreign alliances fraught with danger -- and may well have to risk everything for love and for country.

Open revolt has been thwarted -- for now -- but unrest still simmers in the kingdom of Galitha. Sophie, despite having built a thriving business on her skill at both dressmaking and magic, has not escaped unscathed from her misadventures in the workers' rebellion. Her dangerous foray into curse casting has rendered her powers unpredictable, and her increasingly visible romantic entanglement with the Crown Prince makes her a convenient target for threatened nobles and malcontented commoners alike. With domestic political reform and international alliances -- and her own life -- at stake, Sophie must discern friend from foe... before her magic grows too dark for her to wield."

When I read Torn, the first book in the Unraveled Kingdom trilogy, I was excited by how much I fell in love with the world, magic system, and main character Sophie Balstrade. I'd been anticipating picking up Fray ever since, and it managed to up the intensity and plot to even further than I expected.

This series has always had politics at its core, but Fray took this trilogy to even higher political heights than in Torn. There is so much plotting and planning and political maneuvering that I almost started feeling dizzy at times--and it was brilliant. Miller does a wonderful job of creating a historical-inspired setting with strong political and social world-building, as well as developing a feel for the natural environments of the different locations that exist within it.

Sophie remains a truly charming character. What I love so much about her is that she is far from perfect and comes into this story with her own preconceptions and ideas about social classes, how to make improvements, and many other world views. It is through her experiences, the experiences of others, and her dealings with others that she continues to expand her viewpoint on the world and become a better person everyday. What really stands out about her is that she is not afraid to admit if she is ignorant in regards to a specific topic and will not attempt to force out an uninformed opinion, a trait that I find rather mature and impressive. Her strength really shines in how tough she has to be when dealing with an extensive amount of people who have developed their own hatred for her for how she is helping the lower classes. There were a few things I didn't love about what she chose to do at various crossroads and that felt slightly out of character, especially in regards to her prized clothing store, but I also see this as a turning point for Sophie as she embarks upon a new phase of her life. Plus, I have no idea what could still happen in the next book.

Theodor is another character that comes into the story from a very specific background with fairly specific viewpoints, but he grows as a person in the first book and also in this book. He is another great example of how well Miller can develop multi-dimensional character with real human growth and struggles. Nobody's perfect in this book--the "good" guys sometimes need to learn things, the "bad" characters can sometimes make sense, and in a sense many of the people who aren't outwardly bad do many things that are seen as welcome and positive by some, whereas others would see those actions as wholly negative and unhelpful.

I really love how Miller handled the issue of a revolution from lower classes of citizens against the elite. Sophie is used as a sort of middle man, since she is now engaged to Theodor and can actively try to influence the elite. In doing this, Miller touches on the difficulties of Sophie struggling to make everybody happy. The lower class want a lot all at once, but they have to start off by taking only a little, which they say as being counterproductive when in reality it is the best way for them to get what they want. It was exciting to see how she worked all of this out and showcased it in the ways that she did. The violence that erupts as a result of misunderstood actions or overly passionate feelings coming to a boil place an enormous role in this story as well, and I appreciated how she incorporated all components into a cohesive and thought-provoking novel.

And of course one of the things I love most about this trilogy--the magic! I loved getting to explore more about the depths of this magic, including the darker side of it and how it can be manipulated for bad intentions as well as good, which Sophie usually does.

Overall, I've given Fray 4.75 stars! I cannot wait for the finale!

*I received a copy of Fray in exchange for an honest review. This has no effect on my rating of the novel.*