Can't-Wait Wednesday: The Dragon Republic by R.F. Kuang & Semicolon: The Past, Present, and Future of a Misunderstood Mark by Cecelia Watson

"In the aftermath of the Third Poppy War, shaman and warrior Rin is on the run: haunted by the atrocity she committed to end the war, addicted to opium, and hiding from the murderous commands of her vengeful god, the fiery Phoenix. Her only reason for living is to get revenge on the traitorous Empress who sold out Nikan to their enemies.

With no other options, Rin joins forces with the powerful Dragon Warlord, who has a plan to conquer Nikan, unseat the Empress, and create a new Republic. Rin throws herself into his war. After all, making war is all she knows how to do.

But the Empress is a more powerful foe than she appears, and the Dragon Warlord’s motivations are not as democratic as they seem. The more Rin learns, the more she fears her love for Nikan will drive her away from every ally and lead her to rely more and more on the Phoenix’s deadly power. Because there is nothing she won’t sacrifice for her country and her vengeance."
Okay, so I'm actually read an ARC of this right now (thank you, NetGalley and Harper Voyager!), but I'm still just so excited for it to come out and to see the finished copy. I really enjoyed The Poppy War and have been so intrigued to see where Kuang takes her unpredictable story next. 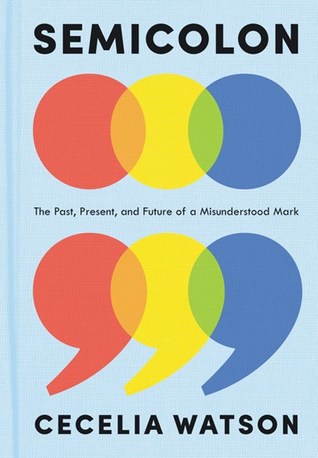 "The semicolon. Stephen King, Hemingway, Vonnegut, and Orwell detest it. Herman Melville, Henry James, and Rebecca Solnit love it. But why? When is it effective? Have we been misusing it? Should we even care?

In Semicolon, Cecelia Watson charts the rise and fall of this infamous punctuation mark, which for years was the trendiest one in the world of letters. But in the nineteenth century, as grammar books became all the rage, the rules of how we use language became both stricter and more confusing, with the semicolon a prime victim. Taking us on a breezy journey through a range of examples—from Milton’s manuscripts to Martin Luther King Jr.’s “Letters from Birmingham Jail” to Raymond Chandler’s The Big Sleep—Watson reveals how traditional grammar rules make us less successful at communicating with each other than we’d think. Even the most die-hard grammar fanatics would be better served by tossing the rule books and learning a better way to engage with language.

Through her rollicking biography of the semicolon, Watson writes a guide to grammar that explains why we don’t need guides at all, and refocuses our attention on the deepest, most primary value of language: true communication."
This is probably a major hit or miss sort of book for people--who wants to read about a punctuation mark?--but I have an oddly strong interest in grammar and think this sounds fascinating! The semicolon really is a divisive little mark and I'd love to read a bit about its history and the various ideas about it and grammar in general.