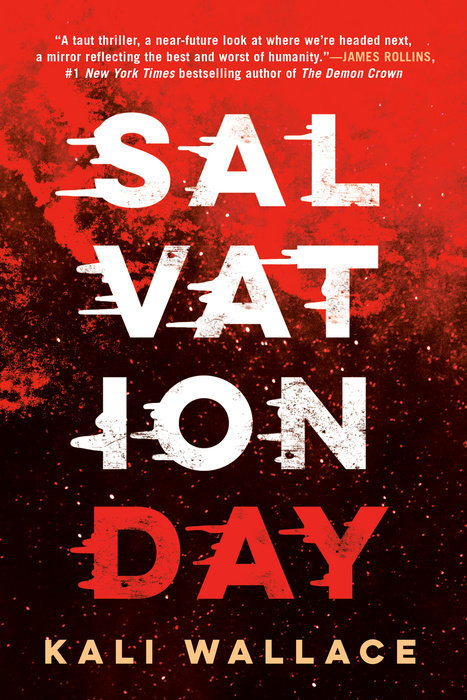 
"A lethal virus is awoken on an abandoned spaceship in this incredibly fast-paced, claustrophobic thriller.

They thought the ship would be their salvation.

Zahra knew every detail of the plan. House of Wisdom, a massive exploration vessel, had been abandoned by the government of Earth a decade earlier, when a deadly virus broke out and killed everyone on board in a matter of hours.

But now it could belong to her people if they were bold enough to take it. All they needed to do was kidnap Jaswinder Bhattacharya—the sole survivor of the tragedy, and the last person whose genetic signature would allow entry to the spaceship. But what Zahra and her crew could not know was what waited for them on the ship—a terrifying secret buried by the government. A threat to all of humanity that lay sleeping alongside the orbiting dead.

And then they woke it up"

At this point, it doesn't seem like I'll ever tire of reading space thrillers, and Salvation Day proved to be yet another thrilling one that kept me hooked throughout.

Salvation Day is a fast-paced adventure in space following a disparate group of people with a variety of different motivations at play. The concept of violent, lethal virus existing on a spaceship and becoming a huge threat is not the most original one to exist among thrillers in space, but Wallace combines it with a unique hostage situation that changes things up enough to keep this book fresh.

The book alternates POVs between Zahra, leader of the crew attempting to take over the House of Wisdom, and Jaswinder, or Jas, survivor of the tragedy that led to the House of Wisdom being abandoned and also whom Zahra also plans to kidnap. Sound confusing yet? Don't worry, things eventually make sense...right before they take some unexpected twists and turns to make sure you never know what to expect. Wallace did a great job with developing characters that have in-depth background and a plausible explanation for what has led them to the points they are in the present day in this novel. Something that I really liked was that the characters had a lot of morally grey aspects to them, as our "good" guys aren't necessarily all that good, and the "bad" guys aren't always that bad, either. I thought she did a great job of realistically portraying how people's backgrounds and circumstances lead them to do things and be influenced in ways they wouldn't necessarily be otherwise. There is a good amount of character in this study despite the major focus being on the more suspenseful aspect of the plot.

The world-building in Salvation Day has both strong and weak points, though overall I found it steady enough to convey a believable world and current situation. There were a few specific areas that Wallace developed really well, such as the location of the House of Wisdom and other relevant space ships/ports used or mentioned in the story which really cemented the current physical world. However, outside of the settings in which the majority of the story takes place, there were only brief mentions of other areas of the world that left me feeling not quite as clear about the state of the world as I could have been. Wallace does mention, for instance, how space exploration has become a crucial investment for the world, but I would have loved to explore more about how it happened and what exactly caused it. This is mentioned briefly, but it felt a bit insufficient as well. Despite this, I didn't have any major issues with understanding the present state of events in the novel, and because of that I had no problem enjoying this book fully.

As I mentioned, Salvation Day is a book that runs through its events at a breakneck speed, though not too fast to keep up, and it seems as though most of the events of the book happen within one or maybe two days total. I enjoyed this quick pace because it helped keep my attention and the intensity of the plot high, but this timeline is also where I had one of my minor issues, as it was never explicitly said how long things were taking or what the time-frame was. Even if it did only take place in one day, I felt confused because there was also never any mention of anyone need food, water, or even a restroom break, despite being stranded onboard an abandoned spaceship. This wasn't a huge problem because I'm sure everyone involved was stressed and not really thinking about necessities, but it definitely still made me wonder why people didn't seem to have any regular bodily functions to deal with. Maybe something was mentioned in passing that I missed, but this is just one of those inconsistencies in books that can frustrate me. There were a few other inconsistencies like this throughout, especially in regards to the virus, but nothing that drastically pulled me out of the story and instead only left me questioning a few things.

Salvation Day isn't afraid to pull punches and readily explores the motivations and consequences of people trapped in dire, unexpected circumstances of survival. It has moments where you might be able to guess what happens, but the overall picture is entirely unpredictable and kept twisting in places I wasn't expecting it to. There are constantly secrets to uncover and new parts of the characters' and world's history to explore.

Overall, I've given Salvation Day 3.75 stars! I had a few minor quibbles here and there, but in the end I sped through this book and had a great time doing it. I can't wait to see what Kali Wallace writes next!

*I received an ARC of Salvation Day courtesy of the publisher in exchange for an honest review. This has no effect on my rating or enjoyment of the novel.*