Review: Our War by Craig DiLouie 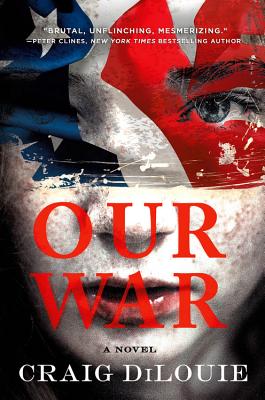 
"When the president of the United States is impeached, but refuses to leave office, the country erupts into civil war.

10-year-old Hannah Miller, an orphan living in besieged Indianapolis, has joined a citizen's militia. She had nowhere else to go. And after seeing the firsthand horrors of war, she's determined to fight with the Free Women militia.

Hannah's older brother, Alex, is a soldier too. But he's loyal to the other side. After being separated from Hannah, he finds a home in a group calling themselves The Liberty Tree militia.

When a UNICEF worker and a reporter discover that both sides are using child soldiers, they set out to shine a light on something they thought could never happen in the United States. But it may be too late because even the most gentle children can find that they're capable of horrific acts."

I finished this book about a week ago and I am still conflicted on how I feel about it and how to rate it. On the one hand, there are elements that make this a really great book with incredible depth and meaning, but on the other hand, there are more than a few elements that simply didn't work for me and left me feeling uncertain. However, I did read through this book in only about two days, so that says something about just how compelling this book ws and how much it dragged me in overall. I've not seen any less than glowing reviews for Our War, though, which leads me to believe that any issues I had might just be very much my own personal opinion.

Our War is not a book for the fainthearted, but it is a book for anyone interested in timely themes, compelling narratives, and characters from a variety of unique backgrounds. The first word that comes to mind when I think about the civil war depicted in this book is 'chaos,' as there is seemingly no end to the unpredictability of this war and the disarray that surrounds it on all fronts. While the lawlessness of the war felt realistic, I felt that the telling of this chaotic war didn't necessarily work well for the reader to follow along with. I had a hard time following along at time and deciphering between all of the different sides and who was who. There's more than just two sides in this war and it's the grey areas among all of them that added depth and realism, but that also left me somewhat confused.

Despite my confusion over the sides in this horrendous civil war, I was impressed by the sheer world-building of it all. DiLouie does a great job creating an America that is nearly unrecognizable, mired in the depths of war and death and violence that go along with it. Everything is in chaos. The cities that we know so well have been turned into battle sites filled with hatred and desperation. There are IEDs everywhere and snipers waiting in the wings making it a life-risking move to stop and stand still for even a second on the street--it's a true, dangerous war space

DiLouie's writing style is intense fast-paced. The story switches POV between five characters among a myriad of short chapters. Having so many chapters didn't really allow me to fully invest myself in any given character's situation, but I did still appreciate how this gave such a comprehensive look at this war from a variety of different angles and perspectives. One of the things that DiLouie did best with his writing was to provide this multi-faceted view of the war that really allows the reader to get into the heads of people on all sides and explore those grey areas. Of the five characters we follow, two are child soldiers, one is a lieutenant, one is a reporter, and the last is a UNICEF worker from Canada whose mission is to provide aid to the children of the war. As I mentioned earlier, having these multiple perspectives, though I do wish they hadn't all been quite so rushed. I was most interested in Hannah, a child soldier, and reporter Aubrey's POV and most enjoyed seeing their role in this war.

My only other issue with Our War is that the ending seemed to wrap up a bit too quickly for my liking. I felt as though DiLouie was really building up to something, but unfortunately I felt as though the action and impact sort of tapered off in a disappointing way. I'm not sure if perhaps DiLouie was attempting to imitate how disappointing and anticlimactically war itself can be, but for me I was just left wanting a little more. This is similar to how I felt about the chaos of the book--it fit the story well, but it also made it difficult for me to follow along at times.

Overall, I've given Our War 3.75 stars. This rating may move up or down depending on how I feel about it in the future, but for right now I just have too many mixed emotions to give it a firm higher rating. This is still a book I highly recommend to anyone interested in the premise--it's intense, thought-provoking, and a compelling read.

*I received an ARC of Our War courtesy of Orbit books in exchange for an honest review. This has no effect on my rating or enjoyment of the novel.*