Review: Evie and the Upside-Down World of Nevermore by Birgitte Märgen 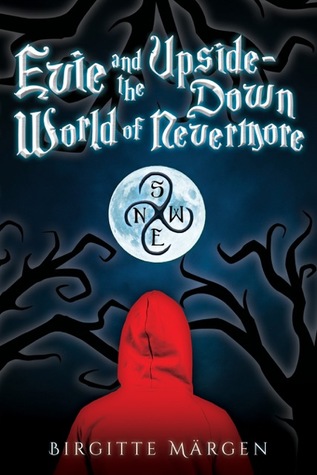 About Evie and the Upside-Down World of Nevermore:


"AFTER FALLING INTO a dark hole when she was running through the forest, Evie finds herself trapped in a strange new world that mirrors our own. Her only guide is a compass stick given to her by an angry gnome who lives in an ancient knobby tree. As she travels through the lands of this upside-down world she happens upon creatures that are twisted versions of fairytale folklore. A place where fairies bite, unicorns charge, mermaids are menacing, and nightmares are more than dreams. A world where the souls of those who could not follow the unspoken rules are trapped forever.

As a southern girl born on the wrong side of the tracks, Evie relies on the wisdom passed down by her grandpappy and the haunting memories of her mama to teach her perseverance of the soul. She learns that things are rarely what they seem as her world is turned upside down."

Evie and the Upside-Down World of Nevermore is an imaginative delight of a novel that combines a myriad of storytelling elements to create a unique and unforgettable story.

The world-building in this book is one of the best parts due its sheer expansiveness and Märgen's ability to bring everything to life in such vivid and creative ways. I loved all of the different fairytale-esque types of creatures and the similarly inspired area that were a part of this expansive and intricate world. I appreciated how much time and care Märgen put into developing her world as something that was realized and full of life.

The main issues I had with this book that prevented me from rating it higher has to do with the characters. I loved Evie and most of the other characters that we come across in the story, but I felt that the development was lacking in Evie's overall character. I would have loved to learn more about Evie and some of the other characters by diving deeper into their motivations and thoughts and seeing them grow more throughout the story. We do get to see a lot of Evie's internal thoughts since much of this journey is undertaken on her own, but I still felt that there was just a little missing.

As much as I enjoyed all of the various plot elements and obstacles that Evie ran into along the way, there were times when the story felt slightly formulaic and repetitive in how she handled them. This didn't take away too much of my enjoyment because it's something that I come across in a lot of fantasy books, but it does still stand out to me at times. The overarching goal still shone through overall and I loved following Evie as she reached the end of her story and as she was able to figure out everything that was thrown at her.

The pacing of Evie and the Upside-Down World of Nevermore was a pleasantly steady one that had a great combination of quicker, action-heavy moments with those of quiet contemplation within Evie's inner dialogue. There were times where I could see it being described as moving slowly, but I enjoyed these parts and therefore didn't have any difficulty with them. I found the prose itself perfect for middle grade readers, though I'm sure adults alike could enjoy this one as I did.

Overall, I've given Evie and the Upside-Down World of Nevermore 3.5 stars (rounded up to four on Goodreads)! If you're looking for an imaginative middle grade read, then I highly recommend you check this one out.

*I received a copy of Evie and the Upside-Down World of Nevermore courtesy of the author in exchange for an honest review. This has no effect on my rating or enjoyment of the novel.*


Posted by Jordan @ForeverLostinLiterature at 3:00 AM