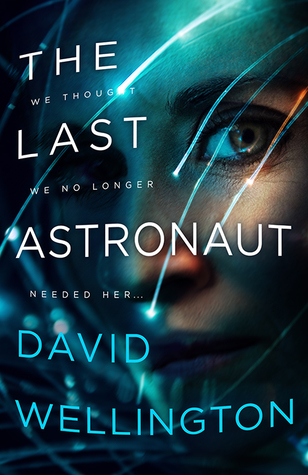 About The Last Astronaut:


"Sally Jansen was NASA’s leading astronaut, until a mission to Mars ended in disaster. Haunted by her failure, she lives in quiet anonymity, convinced her days in space are over.

A large alien object has entered the solar system on a straight course toward Earth. It has made no attempt to communicate and is ignoring all incoming transmissions.

Out of time and out of options, NASA turns to Jansen. For all the dangers of the mission, it’s the shot at redemption she always longed for.

But as the object slowly begins to reveal its secrets, one thing becomes horribly clear: the future of humanity lies in Jansen’s hands."

The Last Astronaut is an addictive sci-fi first contact thriller that I sped through in my desperation to find out what would happen next. The concept and exploration elements of this book were brilliant, although the execution felt a bit lacking at times in regards to character development and certain plot elements. However, this is a story that begs to be read and the alien components were some of the most interesting I've read in a while.

As mentioned, I have some pretty mixed feelings about this one. I loved the themes and the direction Wellington took the story in regards to alien contact and how the humans were able to interact with then, however, I didn't love the writing style of the book or many of the characters. Wellington employed a rather jumpy narrative style that led to inconsistent pacing and left me a little confused at times. Within this style, however, Wellington still managed to convey a sense of urgency and 'what happens next' atmosphere that works to up the intensity of the story, which left me feeling really confused about whether I liked what I was reading or not at times.

Starting with the characters, my biggest issue with them was simply that I had very little interest in any of them. As I've mentioned in reviews before, I don't need to feel connected with a character in order to like them or the book, but there needs to be some sort of compelling force or personality trait about them that draws me to them and unfortunately there just wasn't in any of the characters in this book. Sally, for instance, is the most prominent characters who is returning after a sort of 'retirement' after a failed mission to lead this mission to check out the aliens. Moving past my skepticism over choosing her in the first place (we'll get to that later), her personality was hard to get behind and felt too stubborn and inconsistent at times. She repeatedly felt as though this wasn't a mission she could do and  had so much anxiety about it, but then when confronted with a dangerous situation she stubbornly threw herself into it because of her inability to handle yet another failed mission. I understand how hard that situation would be for her and I wouldn't want to risk another failure either, but I just felt annoyed with her decisions and how she handled things with her crew.

The rest of the characters have distinct personalities from one another, which I appreciated, but outside of that they didn't really stand out to me overly much. I thought some of their interactions felt awkward and unnatural and I often questioned their ability/worthiness to be on this mission in the first place. They were each specialists, but I felt like they didn't know enough about the general basics and safety rules weren't always followed. There were times when one of the characters would have a thought or make a comment about something that felt so incredibly irrelevant or rash that I just wanted to shake them a little and bring them back to reality. It was a bit of a ragtag group that just didn't seem to be the best equipped for the journey, which I do understand was part of the point in showing just how much space exploration had been neglected and whatnot, but it just made the entire premise a bit difficult to swallow.

Outside of those issues, I loved the alien contact. Wellington played with some ideas and directions that I haven't seen before and I found it so interesting and that felt entirely plausible in ways (especially some of the more scientific theories that the characters came up with).

Overall, I've given The Last Astronaut 3.25 stars! I know I mentioned a lot of negatives about this book, but if you like space books/alien exploration/first contact then I do still think you would really enjoy this! The characters aren't great and the format can be off-putting, but the first contact aspect was just fascinating. If you need strong characters, then this might not be the best fit.

*I received an ARC of The Last Astronaut courtesy of Orbit books in exchange for an honest review. This has no effect on my rating or enjoyment of the novel.*