Review: The Furies by Katie Lowe 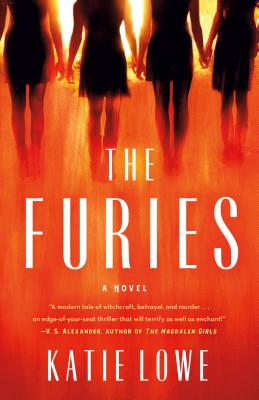 She’s posed on a swing on her boarding school’s property, dressed all in white, with no known cause of death. Whispers and rumors swirl, with no answers. But there are a few who know what happened; there is one girl who will never forget.

One year earlier: a new student, Violet, steps on the campus of Elm Hollow Academy, an all-girl’s boarding school on the outskirts of a sleepy coastal town. This is her fresh start, her chance to begin again in the wake of tragedy, leave her demons behind. Bright but a little strange, uncertain and desperate to fit in, she soon finds herself invited to an advanced study group, led by her alluring and mysterious art teacher, Annabel.

There, with three other girls—Alex, Grace, and Robin—the five of them delve into the school’s long-buried grim history: of Greek and Celtic legends; of the school founder’s “academic” interest in the occult; of gruesome 17th century witch trials. Annabel does her best to convince the girls that her classes aren’t related to ancient rites and rituals, and that they are just history and mythology. But the more she tries to warn the girls off the topic, the more they are drawn to it, and the possibility that they can harness magic for themselves. Violet quickly finds herself wrapped up in this heady new world of lawless power—except she is needled by the disappearance of a former member of the group, one with whom Violet shares an uncanny resemblance. As her friends’ actions take a turn for the darker and spiral out of control, she begins to wonder who she can trust, all the while becoming more deeply entangled. How far will these young girls go to protect one another…or to destroy one another?"

So The Furies was extremely promising...and unfortunately it sort of petered out from there.

The Furies had all the elements to be my favorite sort of story filled with a dark school setting a story of a complex, mysterious friendship among some unique girls.  It's hard to tell you exactly where this book went wrong, but it's really just in how repetitive it felt. I've essentially read this story a hundred times already--there was hardly any innovation on any of the ideas and whenever I try to think about this story I already start to mix it up with other variations of this same plot and setup.

The biggest overarching problem within this book was the fact that everything felt so cliche'd. The 'enigmatic girl' trope is used, but not in any new or exciting way. We have the protagonist, someone who is suddenly and forcibly drawn into a tangled world she didn't expect, and then we have some local legends surrounding the school they all attend, which tends to be a classic trope in 'dark academia' types of books. All of these elements could have turned into something special, but instead remained simple and rather lacking in any passion or intrigue.

I didn't particularly care for any of the characters, either, and I was frustrated with how much vitriol existed among so many of the girls. I was also surprisingly frustrated with Violet, our protagonist, and her lack of any sort of backbone. Robin, the 'mysterious girl,' was a character I found difficult to tolerate as well, and the rest of the characters just never stood out to me. Any sort of development was pretty nonexistent, which is unfortunate because I feel like this story could have gone in some really interesting directions.

Another area that caused me to struggle was the writing style. I'm not sure exactly how to explain it, but something about Lowe's writing felt very...jumpy. I found myself repeatedly pausing and flipping back a few pages because I felt like I'd missed something. There's random time jumps that don't make sense and left me feeling jolted out of the story while I try to gain my bearings. I'm not sure if that was a stylistic choice or just an issue with the writing, but either way it didn't work for me and really infringed upon my reading experience.

To round this off on a positive note, let's touch on a few of the more positive aspects of this book. Despite its issues, I do still enjoy school settings that feature an exclusive secret society that explores some darker, deeper topics than what is discussed in class. We have a teacher as enigmatic as her student and I really enjoyed learning more about her, though I do wish her role had a bit more to it. I also enjoyed the creepy rituals that the girls tried to do and how Lowe managed to work those elements into the story. Plus, I love the actual Furies from Greek myth, so I liked exploring how Lowe used them as an influential plot device for the girls.

Overall, I've given The Furies 2.75 (rounded up to three on Goodreads/Amazon) stars. I really wanted to like this and the skeleton of this story was great! It was simply the execution that failed.

*I received a copy of The Furies courtesy of the publisher in exchange for an honest review. This has no effect on my rating or enjoyment of the novel.*