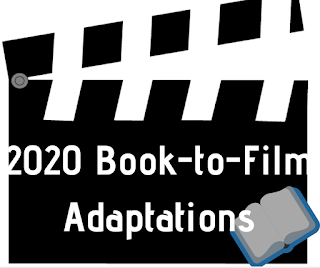 A new year means a whole new slew of book-to-movie adaptation! A few of these were actually on my post last year for 2019 adaptations....but they didn't end up coming out in 2019, so they're here again--and I actually think it's final! I always have mixed feelings about adaptions because there's a part of me that is always disappointed when they aren't exactly what I want, but there's a larger, more rational part of me that understands a film is an entirely different format and interpretation than a book and you can't expect them to be just like the book. That being said, it's always interesting to see what direction creators take for an adaptation!  My biggest peeve, though, is probably when they decided to modernize a period story.
And if we're being honest, I haven't actually been to a movie theatre in... well, more than a year, so unless they are on a streaming service that I own I probably won't see any right away, but still, maybe I'll actually go see a movie next year.

The Turning (The Turn of the Screw) by Henry James
Release Date: January 24th, 2020
Starring: Mackenzie Davis, Finn Wolfhard, Barbara Marten
Director: Floria Sigismondi
Format: Movie
IMDB Description: "A young governess is hired by a man who has become responsible for his young nephew and niece after the deaths of their parents. A modern take on Henry James' novella 'The Turn of the Screw'."

This was on last year's list as well for 2019 releases, but that didn't happen. However, there's actually a trailer and whatnot so I'm pretty sure it's actually going to come out this January!

This was also on my list last year! Funny how movies never come out when they say they might, but that's how it goes with most businesses. I was also under the impression last year that it was going to be animated, but it isn't. I think the dog is CGI, but everyone else is real. I'm not sure why they chose to make the dog CGI since there are plenty of dog actors out there, but hey, I'm not in charge.

The Invisible Man by H.G. Wells
Release Date: February 28th, 2020
Starring: Elisabeth Moss, Aldis Hodge, Oliver Jackson-Cohen
Director: Leigh Whannell
Format: Movie
IMDB Description: "When Cecilia's abusive ex takes his own life and leaves her fortune, she suspects his death was a hoax. As a series of coincidences turn lethal, Cecilia works to prove that she is being hunted by someone nobody can see."

This seems like a very different take on The Invisible Man, so I'm not sure what to expect and I can't say I'm feeling overly optimistic about it, but I'll wait til I see a trailer to decide my thoughts.

I love that this has been adapted and I'm so interested to see how it works out! It looks like it's going to be pretty high quality and I'm looking forward to seeing how it all plays out.


I love the book Rebecca and I'm actually cautiously excited for an adaptation. I'm not a huge fan of the cast list so far, but I'm keeping an open mind. And I hope they haven't modernized this one too much!


Who doesn't love a new Agatha Christie adaptation? Gal Gadot seems like a positive addition to this plus it has a fun setting, so I'm eager to see the finished product!

Okay, confession: I still haven't read The Secret Garden. I really need to, but I just haven't gotten around to it. Maybe I'll read it before the movie comes out, but I'm not betting on it. This adaptation has a wonderful cast and I think it's just going to be a beautiful movie based on what I've seen.

It's no secret that I am not a fan of Dune in any way, but I do know how excited people are for this adaptation still so I wanted to be sure to include it. I'll wait and check out a trailer and maybe I'll check it out also, but as of now I'm not really planning to watch. I'm really excited about other people's excitement, though, and I'm a big fan of Timothee Chalamet!

The One and Only Ivan by Katherine Applegate
Release Date: August 14th, 2020
Starring: Sam Rockwell, Angelina Jolie, Danny DeVito
Director: Thea Sharrock
Format: Movie
IMDB Description: "A gorilla named Ivan tries to piece together his past with the help of an elephant named Stella as they hatch a plan to escape from captivity."

I'm so excited to see how they adapt this one! It's a really adorable story and I'm looking forward to its release.


I still haven't read this book, but I honestly don't think I've heard one negative thing about this book from those I know that have read it. I hope this adaptation lives up to everyone's hopes, and I hope I actually get a chance to read this book and maybe (?) see the movie!


This is apparently going to stream on a service called Peackcock (?) and I have no idea what that is, but if you do and you have it, then hooray for you! I think a new adaptation of this one will be interesting and I'm intrigued to see how it ends up.