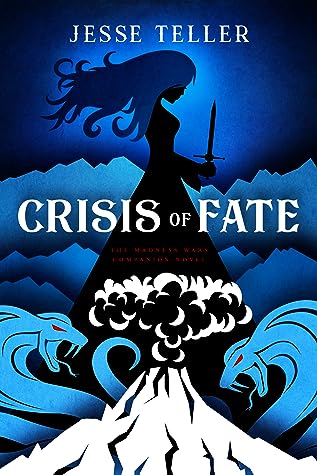 About Crisis of Fate:

"To save her sanity she must give up her soul.

With rare exception, Raendel took everything she ever wanted. Now her vicious thieves guild is festering around her. Through paranoia and insomnia, her grip on reality crumbles, and a crisis leads her to a desperate choice—face retribution or serve a creation of pure evil."

If I'm counting right, I believe this makes the sixth book I've now read by Jesse Teller, and the best part is that this is also the sixth book that I've highly enjoyed reading by Teller, as well! Crisis of Fate happens to be a spin-off novel featuring one of the characters from Teller's most recent previous release, Onslaught of Madness. I'm probably going to keep this review a little on the brief side since it's only 225 pages and because I don't want to give too much detail and/or potential spoilers for Onslaught of Madness.

One of my favorite things about Teller's books have been the characters and their development, and Crisis of Fate is no exception to that. Raendel is a character going through some pretty intense changes and experiences, so it was crucial to capture her mental state and emotions, something that Teller does extremely well. I liked being able to go so deep into her mind and experiencing the darkness and confusion that resided there as a result of everything going on.

The plot of Crisis of Fate was an off-shoot featuring Raendel that I didn't realize I wanted! I genuinely enjoyed diving into this storyline and exploring this rather tragic and intense storyline. I really don't want to say too much about the plot, as mentioned, but I was easily engaged and constantly wanting to keep reading to find out what would happen next. This book was even darker than I expected and I loved how well Teller was able to set such a strong atmosphere that captured this darker tone.

Teller's writing also continues to be the perfect balance of description, action, and engaging narrative. Crisis of Fate doesn't have what I would call a flowery style, but it would also be wrong to call if simple and plain; instead, Teller mixes styles in order to create an extremely compelling and interesting story that kept me engaged throughout the entire story. Teller also continues to excel at writing action and more intense scenes, something that remains a highlight of his writing for me. I often struggles with action scenes and finding myself glossing over some of them or losing interest, but Teller manages to keep my attention through his own skill in their telling.


Overall, I've given Crisis of Fate four stars! I had a fun time with this one and I was so glad to be able to explore this character's own story.

*I received a copy of Crisis of Fate courtesy of the author in exchange for an honest review. This has no effect on my rating of the novel.*

Amazon
Posted by Jordan @ForeverLostinLiterature at 2:00 AM