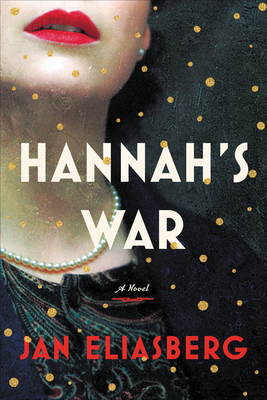 "Berlin, 1938. Groundbreaking physicist Dr. Hannah Weiss is on the verge of the greatest discovery of the 20th century: splitting the atom. She understands that the energy released by her discovery can power entire cities or destroy them. Hannah believes the weapon's creation will secure an end to future wars, but as a Jewish woman living under the harsh rule of the Third Reich, her research is belittled, overlooked, and eventually stolen by her German colleagues. Faced with an impossible choice, Hannah must decide what she is willing to sacrifice in pursuit of science's greatest achievement.

New Mexico, 1945. Returning wounded and battered from the liberation of Paris, Major Jack Delaney arrives in the New Mexican desert with a mission: to catch a spy. Someone in the top-secret nuclear lab at Los Alamos has been leaking encoded equations to Hitler's scientists. Chief among Jack's suspects is the brilliant and mysterious Hannah Weiss, an exiled physicist lending her talent to J. Robert Oppenheimer's mission. All signs point to Hannah as the traitor, but over three days of interrogation that separate her lies from the truth, Jack will realize they have more in common than either one bargained for."

I know I'm a broken record here, but I really mean it this time when I saw that this book, Hannah's War, is probably going to be the last World War II-era book that I read for a good long while because they are just too common. I keep getting sucked into reading them because of an interesting plot even though I'm tired of them, and this book was one of those with such a fascinating storyline and I received an ARC of it so I thought...why not?

Hannah's War follows two main characters: a Jewish physicist Hannah Weiss, who plays a vital role in the development of the atom bomb; and Major Jack Delaney, whose duty is to catch a spy who is sending classified information to scientists working for Hitler. This premise is where our story takes off, with Jack arriving in New Mexico to investigate all of the scientists working at the lab and where Hannah becomes his prime suspect. I thought this entire premise was fascinating, especially since we got to explore the figure of Hannah, based off of a real woman in history who played a similar vital role, and I was really excited about seeing her actions in this story. Similarly, I was excited to see how Jack planned to figure out who the spy was and to figure out why they were leaking information and how that tied together with Hannah's role. Unfortunately, I found that this story seemed to be lacking something that would make it compelling and live up to the epic story it sounded like it would be.

My main issues with this book lie in my lack of connection to the characters or the plot. The characters were lacking in development and personality and weren't presented in a way that really made me care that much about them or become invested in their role. This story is told mainly in the present 1945 timeline, but it contains intermittent flashbacks to 1938 when Hannah was still in Germany, and in what is a rare bookish event for me, I actually enjoyed the flashback portions of Hannah's life in 1938 far more interesting than the present day timeline. I think that this is partially because I felt like we were able to get a little closer to Hannah and her true personality and motivations in the flashbacks, whereas int he present day I couldn't quite figure out her motivations or why she acted the way that she did a t certain times.

The other major issue I had with this book was the writing style. The individual sentences of prose were lovely and well-written with a nice philosophical edge at times, but the story as a whole suffered from what seemed ot be a lot of content gaps. Some of my frustrations centered around the fact that I would often start a new chapter or scene and feel like I had to have somehow missed some vital part of the story because I felt really confused about whatever was happening. There was a decent bit of missing information that frustrated me, partially because I"m not sure if it's supposed to be missing or if it was just an oversight in the book. For instance, I don't think it was ever mentioned how Hannah actually made it to the United States from Germany in the first place, especially since she was Jewish and therefore it was incredibly difficult to get out of Germany--they even had to essentially attempt to smuggle another Jewish character out before she left.

Despite my frustrations, this really wasn't a bad book The concept and themes of scientific achievements and other larger ideas were really interesting to explore and I think those are what really carry this book. I'm not sure if this book just wasn't for me since it seems to be getting fairly positive reviews otherwise. Regardless, it just didn't click with me. Overall, I've decided to give Hannah's War 2.75 stars. If the premise sounds interesting, then I'd encourage you to maybe pick it up from your library or read and sample and see if you like the style--if so, then definitely check it out! It didn't work for me, but I have no doubt it could click for others.


*I received a copy of Hannah's War courtesy of Little, Brown in exchange for an honest review. This has no effect on my rating of the novel.*