Review: A Touch of Death by Rebecca Crunden 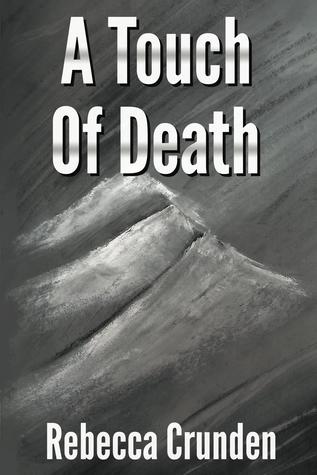 About A Touch of Death:

"A thousand years in the future, the last of humanity live inside the walls of the totalitarian Kingdom of Cutta. The rich live in Anais, the capital city of Cutta, sheltered from the famine and disease which ravage the rest of the Kingdom. Yet riches and power only go so far, and even Anaitians can be executed. It is only by the will of the King that Nate Anteros, son of the King’s favourite, is spared from the gallows after openly dissenting. But when he’s released from prison, Nate disappears.

A stark contrast, Catherine Taenia has spent her entire life comfortable and content. The daughter of the King’s Hangman and in love with Thom, Nate’s younger brother, her life has always been easy, ordered and comfortable. That is, where it doesn’t concern Nate. His actions sullied not only his future, but theirs. And unlike Thom, Catherine has never forgiven him.

Two years pass without a word, and then one night Nate returns. But things with Nate are never simple, and when one wrong move turns their lives upside down, the only thing left to do is run where the King’s guards cannot find them – the Outlands. Those wild, untamed lands which stretch around the great walls of the Kingdom, filled with mutants and rabids."

A Touch of Death combines elements of dystopia, sci-fi, a few post-apocalyptic vibes, and a touch of romance thrown in, all of which result in an unpredictable adventure following a few characters on a journey to not only save their lives, but to find some answers about the world they inhabit.

This story takes place in a world that seems similar to our own, but that is much more dystopian in style and lives under the rule of a rather brutal monarchical reign. I found the world-building to be one of the most intriguing components of this book and I felt Crunden did a great job at both developing its realism and also building up a strong atmosphere that really sets the somewhat bleak and cruel tone of both the world and the story. There is a huge privileged vs. poor struggle at the core of this world that added so much to the compelling nature of the story and that also contributed to many of the strong themes. My only sort of 'complaint' (which isn't really a complaint at all) is that I'd love to just learn even more about this world; Crunden lays everything out well, but I'm just so intrigued by how this world developed and all the components that I'm completely open to learning even more and wish I could more.

The two main characters we follow are Catherine and Nathaniel (aka Nate). Catherine was 'matched' and in a relationship with Nate's brother, Thom, and isn't Nate's biggest fan at the start of this story (or for much of it as it continues, either), but the intense and unpredictable events that occur in this story force them to spend more time together than they could have ever expected. Catherine was a surprisingly strong character who experienced some important explorations in finding her own strength to persevere in this story. I found her choices a little confusing at times, but for the most part I really enjoyed following her on this journey and seeing how she adapted to the crazy situations thrown at her.

Nate is a pretty good foil to Catherine in most aspects. He is more of a troublemaker and has a tumultuous and somewhat dodgy past, some of which is why Catherine isn't his biggest fan. He has a mysterious air to him and I really would love to learn more about him and specifics of his past. The beginning of this book has a brief bit that touches on one major event from his past, but I would even love to read some sort of prequel or short story that explores more of his character, as he really was a compelling figure. There are a number of secondary characters that appear in A Touch of Death that I thought were all developed well and that I thought only added good things to this story.

A Touch of Death has strong pacing that wasn't ever too fast or too slow, but rather had a nice balance of moments that slowed down when necessary, but still kept the pace and created a smooth reading experience. Crunden has a lovely writing style that balances eloquent descriptions of setting and emotion with a readable prose that makes it easy to follow the story in the best way.

I don't really have many issues with this story, I'm happy to say! My only minor issues would be that I would have appreciated a bit more background to a few of the main events that happens and information about the world, especially some about the "mutants" that exist and the various places mentioned in this world. There were a few moments where the intensity of the stakes seemed uncertain or confusing, but this really didn't affect my enjoyment and were mostly minimal.

Overall, I've given A Touch of Death 4.25 stars! I really had a highly enjoyable time reading this book and I sincerely look forward to seeing what's next. I wouldn't necessarily call the ending a firm cliffhanger, but it absolutely left me wanting to know what was going to happen next in this story since it is far from over.


*I received a copy of A Touch of Death courtesy of the author in exchange for an honest review. This has no effect on my rating of the novel.*

Amazon | Book Depository
Posted by Jordan @ForeverLostinLiterature at 2:00 AM

Email ThisBlogThis!Share to TwitterShare to FacebookShare to Pinterest
Labels: a touch of death, dystopia, rebecca crunden