Mini-Review: The Woman in the Mirror by Rebecca James 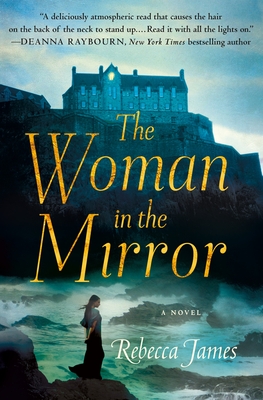 About The Woman in the Mirror:

"For more than two centuries, Winterbourne Hall has stood atop a bluff overseeing the English countryside of Cornwall and the sea beyond.

In 1947, Londoner Alice Miller accepts a post as governess at Winterbourne, looking after Captain Jonathan de Grey’s twin children. Falling under the de Greys’ spell, Alice believes the family will heal her own past sorrows. But then the twins’ adoration becomes deceitful and taunting. Their father, ever distant, turns spiteful and cruel. The manor itself seems to lash out. Alice finds her surroundings subtly altered, her air slightly chilled. Something malicious resents her presence, something clouding her senses and threatening her very sanity.

In present day New York, art gallery curator Rachel Wright has learned she is a descendant of the de Greys and heir to Winterbourne. Adopted as an infant, she never knew her birth parents or her lineage. At long last, Rachel will find answers to questions about her identity that have haunted her entire life. But what she finds in Cornwall is a devastating tragic legacy that has afflicted generations of de Greys. A legacy borne from greed and deceit, twisted by madness, and suffused with unrequited love and unequivocal rage..."

The Woman in the Mirror is one of those books that caught my eye because it had a lot of tropes I tend to love, such as: person accepts position as governess/child caretaker/etc. in a remote mansion under mysterious circumstances, said mansion seems to be sort of haunted or odd things happens, the mansion/area has dark stories from its past, and it's (mostly) set in a historical setting. This book has it all and I wasn't necessarily expecting something amazing from it, but I did hope that it would be a strong contender in book tropes I love. I've finished this book with mixed feelings and I feel mostly pretty average about it.

What I liked: The atmosphere of The Woman in the Mirror was top notch and I really felt myself falling into this dark, gloomy, and rather cold atmosphere that was present throughout the entire story and in both timelines. This book has a split timeline narrative where we follow Alice Miller in 1947 post-war London and Rachel Wright in present day New York, and although I'm not usually a huge fan of split timelines because I almost always end up preferring the historical timeline (which is simple because I don't care for present day timelines as much), I will say that I enjoyed both timelines in this book because of the way that James maintained the focus of each as being on the house itself as the main character. The mysterious background of the mansion was also an interesting part of this house and it definitely made me want to know more about it.

What I didn't like: The characters were fairly average in the beginning, but about halfway through, Alice's personality seemed to somewhat go off the deep end and her subsequent thoughts and actions felt like they had done a complete 180, and I was left feeling confused. There was also a continuous reference and occasional flashbacks to some sort of 'dark event' in Alice's past that was often mentioned, but that I felt was really rather out of place most of the time and didn't quite fit in with everything else. The underlying plot line that runs through both timelines wasn't overly engaging, and I also felt that the promising mystery of the mansion fizzled out a little towards the end.

Bottom line: Overall, I've given The Woman in the Mirror 3.5 stars! If the sound of this setting and premise sounds like your cup of tea, then I'd say it's worth it to check it out, but if you're tired of these storylines then I'd say to give it a pass. There's nothing exceptionally noteworthy or exciting, but it was still a mostly enjoyable experience.


*I received a copy of The Woman in the Mirror courtesy of the publisher in exchange for an honest review. This has no effect on my rating of the novel.*

Email ThisBlogThis!Share to TwitterShare to FacebookShare to Pinterest
Labels: rebecca james, review, the woman in the mirror