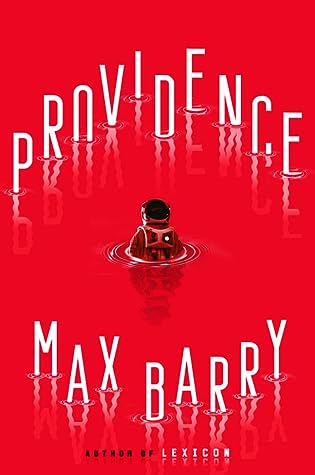 "The video changed everything. Before that, we could believe that we were safe. Special. Chosen. We thought the universe was a twinkling ocean of opportunity, waiting to be explored.

Seven years after first contact, Providence Five launches. It is an enormous and deadly warship, built to protect humanity from its greatest ever threat. On board is a crew of just four--tasked with monitoring the ship and reporting the war's progress to a mesmerized global audience by way of social media.

But while pursuing the enemy across space, Gilly, Talia, Anders, and Jackson confront the unthinkable: their communications are cut, their ship decreasingly trustworthy and effective. To survive, they must win a fight that is suddenly and terrifyingly real."

I read Max Barry's Lexicon years and years ago, so when I saw that Providence was coming out, I was really excited to see how his writing may have changed over the years. Providence was just as thrilling and fast-paced as I remember Lexicon being, but the futuristic space and alien contact-era setting was a vast change and one that I found fascinating.

Providence follows four main characters--Talia, Gilly, Jolene, and Anders--as they embark upon a war tour of sorts on an AI space ship that has been out fighting an alien enemy threat. In reality, the humans don't really do anything while battling with the enemies because the AI itself is so much more advanced and able to predict what weapons and tactics to use, but they are still there as a sort of 'symbol' of humans fighting the alien life force.

The four characters were vastly different from one another in personality, which I appreciated because it made it easy to tell them apart when we switch between POVs. I enjoyed the POV switches quite a bit for once because I felt that they were actually useful in understanding the different elements of the events unfolding and I was able to understand each person's personality and motivations for some of the weird and otherwise confusing actions they undertook. There is a huge dysfunctional nature to this group that doesn't do them any favors while essentially locked up alone together light-years away from earth (hey, kinda like a quarantine, minus the light-years! ...too soon?). Tensions get a little high (understandably) and this makes for some problematic interactions, especially when things with the AI start to get a bit too unpredictable.

I will say that I never really felt fully connected to any of these characters and I found the plot lacing in details that I really like. This part is a personal preference, but usually when humans are going off into space and living on a ship, there are a lot of adjustments that are needed and details about how to do everyday activities, get used to living, eat food, etc., and Providence doesn't really get into that. It's not really a big deal in general because this book definitely focuses more on the plot, but if you're someone like me who prefers to have some of those details, just know going in that this doesn't have those. If you don't like those details, then this might be perfect for you!

There was also still something about this plot that didn't quite resonate with me, and I found some of the revelations about the aliens near the end were...slightly odd. I found a few of the scenarios is a little hard to suspend by disbelief over, but I also understand that this book was playing with some new ideas about war with aliens in space, so I didn't let it impact my enjoyment too much. That being said, I felt like there wasn't quite enough set up and introduction to the world and characters as I would have liked, which left me feeling like I was never fully invested in the story.

I loved that Providence explored so many different avenues for AI and alien life. Barry created some thought-provoking moral and ethical conversations around the usage of AI and how it can be used and even trusted to work alongside or in place of humans. If the AI is solely fighting a human's war, does it take away the impact or understanding of magnitude? Are the humans even really waging the war? The aliens were also an intriguing invention and although they weren't necessarily my favorite form of alien life that I've read about, I still appreciated how Barry developed them into a much more complex yet routine-oriented society than I expected.


*I received a copy of Providence courtesy of the publisher in exchange for an honest review. This has no effect on my rating of the novel.*