Review: The Girl and the Stars by Mark Lawrence 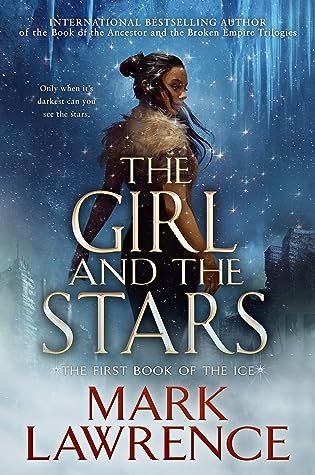 About The Girl and the Stars:

"In the ice, east of the Black Rock, there is a hole into which broken children are thrown.

On Abeth the vastness of the ice holds no room for individuals. Survival together is barely possible. No one survives alone.

To resist the cold, to endure the months of night when even the air itself begins to freeze, requires a special breed. Variation is dangerous, difference is fatal. And Yaz is not the same.

Yaz is torn from the only life she’s ever known, away from her family, from the boy she thought she would spend her days with, and has to carve out a new path for herself in a world whose existence she never suspected. A world full of difference and mystery and danger.

Yaz learns that Abeth is older and stranger than she had ever imagined. She learns that her weaknesses are another kind of strength. And she learns to challenge the cruel arithmetic of survival that has always governed her people.

Only when it’s darkest you can see the stars."

The Girl and the Stars was nothing like I expected and introduced an entirely new focus on entirely new component of the world Mark Lawrence created in his The Book of the Ancestors trilogy. Although I think there are benefits to having read the previous trilogy before reading this one, it's completely separate from that trilogy and someone new to this world could easily jump into this book with reading The Book of the Ancestors prior. This book takes place in the same world and with the same magic system, but in a new setting and with new characters, plot, and conflicts.

In this book, we follow Yaz, a sixteen year-old who inadvertently ends up in the black hole trapped under the ice that children who are not accepted as adults into her tribe are thrust into. Her brother also ends up in the hole, though they are separated and Yaz sets her goal as trying to find her brother who is also lost in the darkness. While there, Yaz meets and essentially teams up with others who have been thrown into hole who are known as The Broken, who now live under the veil of darkness there.

Lawrence  excels in creating characters with very distinct personalities that are hard to forget. Yaz is one of those characters that has an extremely strong personality and stubbornness that makes her both admirable and frustrating. She never loses sight of what her purpose for doing things is and she's always bold enough to make her thoughts and plans known--even if they aren't always exactly popular. The other characters we meet are varied and different immensely in character, but all seem to fit together as a somewhat perfectly haphazard group. It's easy to love some characters, hate others, and feel utterly conflicted about even more.

Life as one of the Broken is a not particularly enticing way of living, but the people there have no real choice and spend their developing a method of working and living in order to stay alive and maintain a system that Yaz slowly discovers during her time there. I love exploring the sort of dark underworld of the hole and all the different innovative ideas that make up the physical structure of the place itself, as well as the various creatures and odd things that also inhabit the area. I still somewhat feel as though Lawrence didn't fully explain everything he could have in this book, but I also know that that means it is likely to be explored in later books.

Lawrence has a similar pacing to that of The Book of the Ancestors, though The Girl and the Stars was slightly faster at most points along the way. There's a good mix of information, action, and events that continuously move the plot along. Added to all of that is the unpredictably of the events of this book, which really helped to keep me glued to the page. There always seemed to be something crazy or just plain unexpected that would pop up when I least expected it. The only sort of negative I would throw in is that a few of the 'fight' scenes felt a little too drawn out or repetitive, which did seem to drag things out occasionally, though I'm sure this will not be an issue for most people as it seems to be more of a personal preference.

Overall, I've given The Girl and the Stars four stars!


*I received a copy of The Girl and the Stars courtesy of Ace in exchange for an honest review. This has no effect on my rating of the novel.*

Email ThisBlogThis!Share to TwitterShare to FacebookShare to Pinterest
Labels: mark lawrence, review, the girl and the stars