Can't-Wait Wednesday: A Declaration of the Rights of Magicians by H.G. Parry & The Angel of Crows by Katherine Addison 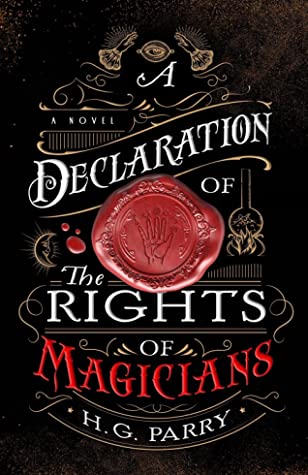 From Goodreads:
"A sweeping tale of revolution and wonder in a world not quite like our own, A Declaration of the Rights of Magicians is a genre-defying story of magic, war, and the struggle for freedom in the early modern world.

It is the Age of Enlightenment -- of new and magical political movements, from the necromancer Robespierre calling for revolution in France to the weather mage Toussaint L'Ouverture leading the slaves of Haiti in their fight for freedom, to the bold new Prime Minister William Pitt weighing the legalization of magic amongst commoners in Britain and abolition throughout its colonies overseas.

But amidst all of the upheaval of the early modern world, there is an unknown force inciting all of human civilization into violent conflict. And it will require the combined efforts of revolutionaries, magicians, and abolitionists to unmask this hidden enemy before the whole world falls to darkness and chaos."
This has been one of my most anticipated 2020 releases! I loved Parry's The Unlikely Escape of Uriah Heep, which came out last year, and ever since I've been so eagerly awaiting what she'd be writing next. A Declaration of the rights of Magicians sounds like such an interesting and exciting premise and I really can't wait to dive in and explore! I'm fortunate to have an ARC of this one already, so it's coming up soon to be read. :)

In an alternate 1880s London, angels inhabit every public building, and vampires and werewolves walk the streets with human beings under a well-regulated truce. A fantastic utopia, except for a few things: Angels can Fall, and that Fall is like a nuclear bomb in both the physical and metaphysical worlds. And human beings remain human, with all their kindness and greed and passions and murderous intent.

Jack the Ripper stalks the streets of this London too. But this London has an Angel. The Angel of the Crows."
I'm always excited about alternate Londons! This Angel concept sounds really interesting and I don't think I've ever read something quite like it, so I'm excited to check it out. Addison is also a fantastic author and I'm so happy that she has another book coming out.

Email ThisBlogThis!Share to TwitterShare to FacebookShare to Pinterest
Labels: a declaration of the rights of magicians, can't-wait wednesday, cww, h.g. parry, katherine addison, the angel of crows