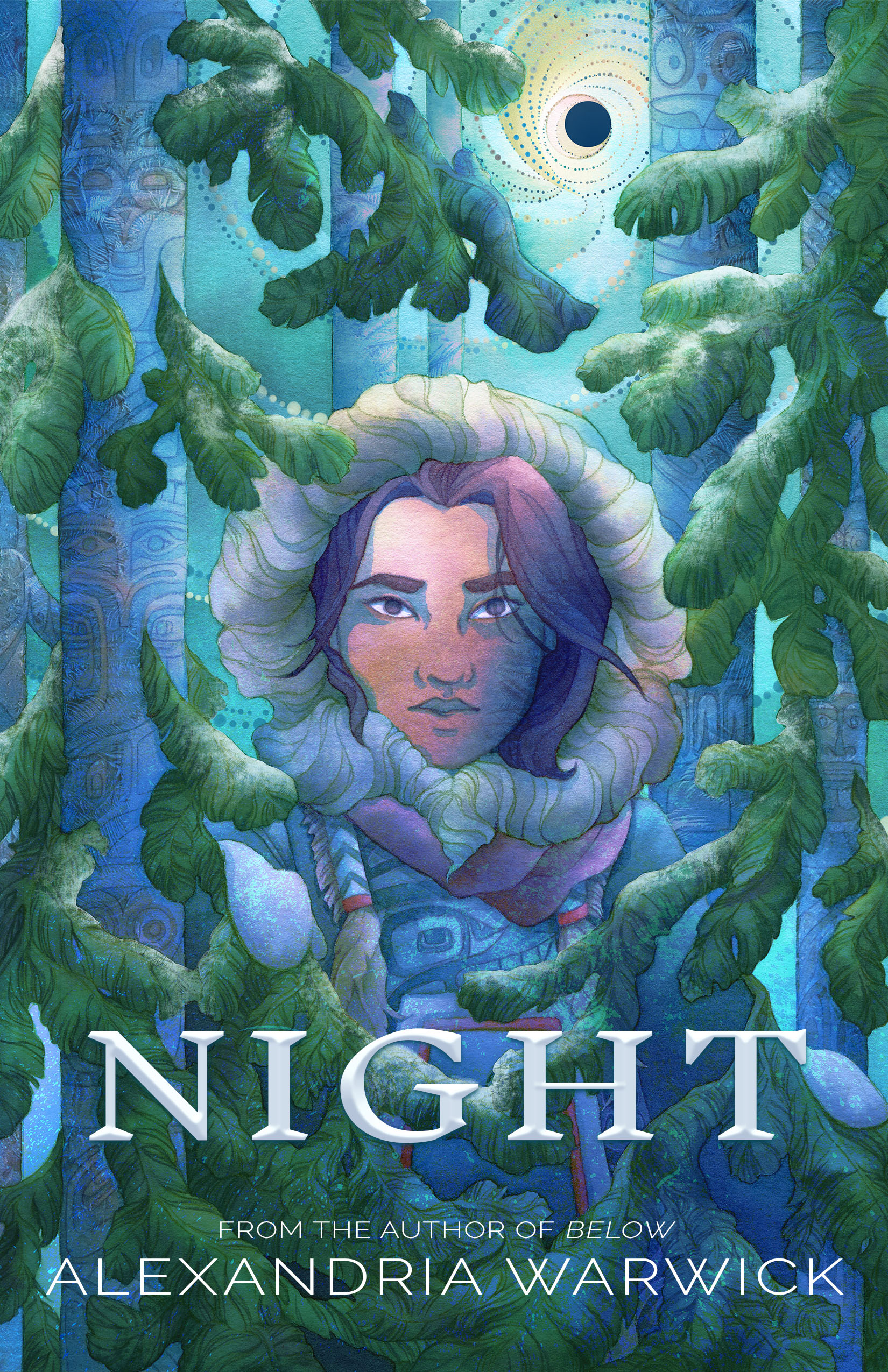 
"After months in captivity, Apaay managed to escape Yuki's labyrinth with her life. But her freedom did not come without a steep cost. When the Face Stealer, the North's most notorious demon, calls in her blood oath, Apaay must heed his demand. Debts, after all, must be repaid.

As Apaay attempts to navigate her uprooted life, something dark slithers among the snow-dusted conifers of the North. A long-dead war is unfinished, and there are those who would see it revived. In a place where misplaced loyalty could mean her death, Apaay must look inward to repair her broken soul—for if she cannot place trust in those around her, she might find enemies are closer than they appear.

In this stunning follow-up to Below, Alexandria Warwick brings the second book in her dark and seductive North series to thrilling new heights."

Night is the impressive follow-up to Below, part of Warwick's North trilogy that is inspired by Inuit mythology and set in the Arctic. I really enjoyed the incorporation of Inuit mythology and the beautiful setting and story that Warwick created in the first book, so I was really excited to have a chance to read Night early., and I wasn't disappointed in the slightest.

Night felt considerably slower-paced than Below, but I think it matched the story well and I didn't find that it dragged, but rather allowed time for the character process various traumas and experiences from both the first book and their current situations. There is a lot to unpack and deal with, and I think Warwick matched the pace of the story nicely with the general atmosphere. This was much more character-driven than Below, and I really liked getting a chance to spend some more time with these characters.  Unlike with Below, however, I wasn't pulled into this book as quickly as I was before, but I think a lot of that just has to do with the slower pace that I wasn't necessarily expecting. The plot slowly expands over the course of this book in a compelling manner, slowly incorporating more twists and detailed components that I enjoyed watching unfold.

Apaay continues to be an incredibly  brave character never seems to stop fighting. Her internal struggles take over a lot of her focus and actions in this book and I found it to be a really relatable and authentic look at how much our lives can be overtaken by our thoughts and mental battles. No matter how exhausted she becomes by these struggles, though, Apaay holds strong and I loved following her journey. The other main players in this book would have to be the Face Stealer--and he's come a long way from his role in the first book! There were times when I almost forgot how he was in the first book and it almost felt jarring at times, but overall I think Warwick handled this transformation and multi-faceted nature of him in a really careful way that worked well. Another character we get a POV from is Ila, and I particularly enjoyed getting to see her own story continued from Below and how she has been growing and adapting to her new life.

One of the things that continues to most stand out to me about Warwick's books is how sincere they are and how deeply she explores some truly dark and difficult subjects. Warwick doesn't tiptoe around difficult situations or conversations, and she readily explores everything that her characters feel and experience, which is part of what brings them to life in such an authentic manner that really allows me to connect with them.

Overall, I've given Night four stars! There's so much more that I could say about this book, but since this is a sequel review I'm trying to refrain from going into too much detail. Night isn't out until October 8th, so there's plenty of time to pick up a copy of Below in preparation of its release! If you like exciting fantasy, Arctic settings, and richly drawn characters, then definitely give this series a read!