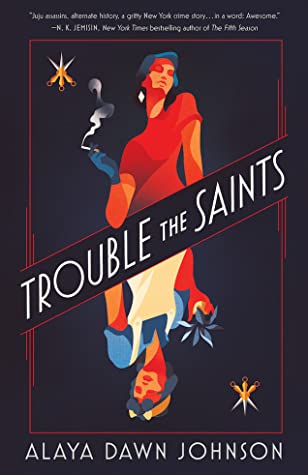 About Trouble the Saints:


"The dangerous magic of The Night Circus meets the powerful historical exploration of The Underground Railroad in this timely and unsettling novel, set against the darkly glamorous backdrop of New York City at the dawn of WWII.

Amidst the whir of city life, a girl from Harlem is drawn into the glittering underworld of Manhattan, where she’s hired to use her knives to strike fear amongst its most dangerous denizens.

But the ghosts from her past are always by her side—and history has appeared on her doorstep to threaten the people she loves most.

Can one woman ever sacrifice enough to save an entire community?

Trouble the Saints is a dazzling, daring novel—a magical love story, a compelling chronicle of interracial tension, and an altogether brilliant and deeply American saga."

Trouble the Saints is an alternate fantasy that takes place right around the beginning of WWII and focuses on Phyllis, a girl from alternate history-Harlem who wants nothing more than to run from her past life and begin anew. The first thing that comes to mind when I think about this book is how immersive it was. I really felt like I was a part of this world and the way that Johnson sets up the world makes it feel vivid and and alive, though in a sort of noir quiet manner. There's also a plentiful amount of references and word choices that really convey the time period that Johnson is aiming for and made me feel sucked into the setting.

Don't let the comparison to The Night Circus fool you because this book really has nothing to do with it and that's to it's own benefit. I thought The Night Circus was a beautiful story, but Trouble the Saints was beautiful in its own right and doesn't need any comparisons. Although I had some trouble with the execution of the plot and XXX, I never put this book down because I thought the prose was beautiful enough in its own right to keep reading. There's a very noir-style feel to the atmosphere and I think Johnson did an excellent job of conveying this dark, mysterious sense that wasn't overwhelming, but that was constantly present in the background. This book also tackles some really important topics such as sexism, misogyny, race, and others, all of which are vital components of this story and really help to convey some interesting discussions and ideas.

Unfortunately, now we must move to discuss the elements of this book that I didn't like and which ultimately brought the star rating down. I do want to preface this by saying that I completely believe this is a 'it's not the book, it's me' situation in that I can see where it could easily be someone's new favorite read, so keep an open mind. The biggest issue I had was that I found the plot itself fairly boring. I mentioned that the prose was so beautiful that I kept reading, which is true, but the content of that prose just didn't grab me. I found the events that occurred a bit disjointed and there weren't a whole lot of events that made me strongly desire to pick up this book against after putting it down.

Additionally, I didn't really care for any of the characters themselves. Phyllis and the other characters were all interesting enough, but something about the way in which they were written always left me feeling as though I were being held at arm's length from them. In a way, this sort of fit the dark atmosphere that makes me feel like these characters wouldn't want to connect with others, but as a reader, there needs to be something that keeps me hooked. I also didn't care the multi-POV situation in this book, and I really felt like Phyllis should have stayed the sole narrator.

Overall, I've settled on 3.5 stars for Trouble the Saints! I initially gave it three, but honestly, I really like the direction and style Johnson took this book in, and I think it really did play with something new in the fantasy genre. I recommend this one to anyone who likes noir, alternate history, or simply trying new things in fantasy!

*I received an ARC of Trouble the Saints courtesy of Tor in exchange for an honest review. This has no effect on my rating or enjoyment of the novel.*