Review: The Sin in the Steel by Ryan Van Loan 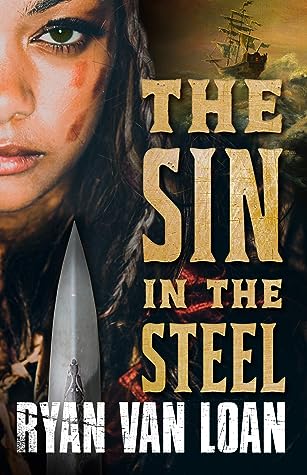 About The Sin in the Steel:


"Heroes for hire. If you can pay.

Buc:
Brilliant street-rat
Her mind leaps from clues to conclusions in the blink of an eye.

No. Not in crime--in crime-solving.

They've been hired for their biggest job yet--one that will set them up for a life of ease.

Buc and Eld are the first private detectives in a world where pirates roam the seas, mages speak to each other across oceans, mechanical devices change the tide of battle, and earthly wealth is concentrated in the hands of a powerful few.

It's been weeks since ships last returned to the magnificent city of Servenza with bounty from the Shattered Coast. Disaster threatens not just the city's trading companies but the empire itself. When Buc and Eld are hired to investigate, Buc swiftly discovers that the trade routes have become the domain of a sharp-eyed pirate queen who sinks all who defy her.

Now all Buc and Eld have to do is sink the Widowmaker's ship....

Unfortunately for Buc, the gods have other plans.

Unfortunately for the gods, so does Buc."

If you're looking for a quick-witted, action-packed, ship and pirate-filled adventure, then step right up because The Sin the Steel is exactly what you're looking for! This book is escapism at its best, full of sarcasm and snark, a compelling duo of characters, and--once again-- pirates, of course, while also maintaining high quality writing with a fantastic story at its heart.

The world-building in The Sin in the Steel was particularly vibrant and well-constructed, and I could tell that the author took care in creating an elaborate backdrop for both the world and the story. There were a few small areas where I felt I didn't quite understand certain things as thoroughly as I might like to, but I didn't find this to be a very big issue overall. The only downside I really have is that I wish we could just have more and more of it (which I'm sort of hoping we'll get to explore in the next book), as there were plenty of locations visited and elements discussed, but there just seemed to be more time that could be spent on some of them or explored in general.

From first glance, Buc appears to be the rather stereotypical character who is a bit of a genius in certain ways, grew up in a hard life, and has a rebellious attitude that is hard  to keep quiet and even often gets her into trouble. However, Buc has a lot more to her than just those elements and it was such a delight to watch her navigate the chaos that occurs in this book, learning to trust both herself and others, and figuring out what exactly her goals are. Buc is also a bit impulsive and makes some decisions that aren't always the brightest, which does make her a bit unlikable, but there's still something oddly charismatic and compelling about her that kept me hooked.

We also have Eld, the more logical and even-minded of the two who sort of keeps Buc in line--though, I don't think there's too much Eld could do to actually control Buc, rather he just makes sure nothing too horrendous happens as a result of her often poor decisions. Eld is one with a slightly more mysterious background, all we know initially is that he was a soldier who was dishonorably discharged and has some rather strong feelings about certain topics, such as magic.

Ryan Van Loan has some strong pacing in this book and creates what seemed to me to be a pretty balanced pacing that vacillated perfectly between faster-paced moments and some moments where readers (and characters!) can take a breath and figure out what is even going on in the plot. There are so many different twists and turns, some that impact the plot in major ways and some that are more minor, but still prove important to the plot and individual character development. I can easily say that I was never given the opportunity to become bored while reading this book!

Overall, I've easily given The Sin in the Steel four stars! I wholeheartedly recommend this to anyone looking for a fast-paced adventure story with an exceptionally dynamic duo that make it hard not to connect with and desire to follow them on their journey. This is the perfect escapist read for summer and/or these rather, er, stressful (?) times for everyone and I cannot wait for the sequel!

Email ThisBlogThis!Share to TwitterShare to FacebookShare to Pinterest
Labels: review, ryan van loan, the sin in the steel