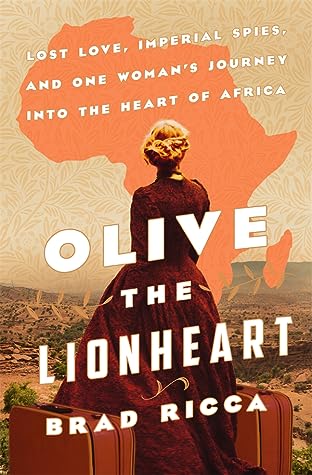 About Olive the Lionheart:


"In 1910, Olive MacLeod, a thirty-year-old, redheaded Scottish aristocrat, received word that her fiancé, the famous naturalist Boyd Alexander, was missing in Africa.

So she went to find him.

Olive the Lionheart is the thrilling true story of her astonishing journey. In jungles, swamps, cities, and deserts, Olive and her two companions, the Talbots, come face-to-face with cobras and crocodiles, wise native chiefs, a murderous leopard cult, a haunted forest, and even two adorable lion cubs that she adopts as her own. Making her way in a pair of ill-fitting boots, Olive awakens to the many forces around her, from shadowy colonial powers to an invisible Islamic warlord who may hold the key to Boyd's disappearance. As these secrets begin to unravel, all of Olive's assumptions prove wrong and she is forced to confront the darkest, most shocking secret of all: why she really came to Africa in the first place.

Drawing on Olive's own letters and secret diaries, Olive the Lionheart is a love story that defies all boundaries, set against the backdrop of a beautiful, unconquerable Africa."

Olive the Lionheart tells the rather remarkable journey of Olive MacLeod as she journeys into Africa on an expedition after receiving news that her fiance, Boyd Alexander, was killed while on his own expedition there.

I'm a big fan of adventure stories that are full of exploration and learning about new cultures, so this book resonated with my almost immediately. It's important to keep in mind that this story takes place during the heavily colonial period of Africa, which basically means that just about all of our sources from Olive and those around her are told from the colonial perspective (a vast amount of "othering" is present in this story). It's not hard to remember this since those views can be rather strong and not entirely respectful of various African cultures that they meet and interact with, but I still think that Ricca presented the different places and peoples that Olive meets in such a way that I was able to appreciate them more. It also allows for the reader to both acknowledge the ways in which people acted and were treated at the period, while still allowing for us to acknowledge Olive's own independent acts and accomplishments.

Olive is an incredibly surprising person, and I found so many of her choices and attitudes entirely unpredictable, which I really think made for an incredible journey, as well as sparked my interest in learning more about her even after finishing this book (which is always a sign of a good book to me when it sparks interest in other things!). Many of the sources that Ricca uses for Olive are from her own diary entries and letters sent back and forth between her and Boyd, which I think really allowed me to get to know Olive and her personality through her writing style and ways of interpreting and recounting the different things she experienced. Ricca also shares many of Boyd's letters and diary entries, and together I think both allowed for a rather clear picture to be drawn about both their relationship and how they interacted with the new-to-them lands of Africa.

Some highlights from this story include some frightening and awe-inspiring encounters with animals, peoples from different Africa tribes, and the many adventures had while simply traveling through unknown lands in a country foreign to those traveling together. I also found the interactions with the colonial government and government figures of particular interest, as I've never really had a chance to explore more about how they actually worked and the relationships that were developed in relation to them.

Olive's story is a rich one, full of incredible experiences and unbelievable adventures, and I think Ricca performed a rather impressive feat in bringing all of his research and sources on Olive and everything associated with her journey together into one comprehensive book. The caveat with this is that I found his particular method for telling this story a bit disjointed and altogether confusing overall. The timeline itself seems to switch around in ways that don't entirely make sense to me and I found myself losing the main thread of the story at times as I tried to piece things together and figure out where different events fit in on the timeline of events in both Olive and Boyd's journeys. Ricca is a strong storyteller with great narrative flow, but unfortunately I found it lost some of its charm as a result of his chosen format for relaying the events.

Overall, I've given Olive the Lionheart four stars. I've really been debating what to give it between three and four stars because the formatting around the timeline really did frustrate me at times, but at the end of the day I also really enjoyed this adventure and learning more about Olive and all of her accomplishments. Because of that, I decided to rate this one more heavily on the enjoyment factor and am leaving it at four, at least for now! If you like following people on their new adventures in places other than our own, then you should definitely check out Olive the Lionheart.

Amazon | IndieBound
Posted by Jordan @ForeverLostinLiterature at 2:00 AM

Email ThisBlogThis!Share to TwitterShare to FacebookShare to Pinterest
Labels: olive the lionhearted, review