Review: Dead Man in a Ditch (The Fetch Phillips Archives #2) by Luke Arnold 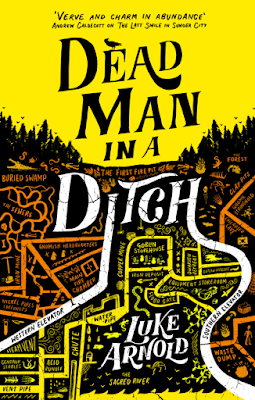 About Dead Man in a Ditch:


"The name's Fetch Phillips -- what do you need?
Cover a Gnome with a crossbow while he does a dodgy deal? Sure.
Find out who killed Lance Niles, the big-shot businessman who just arrived in town? I'll give it shot.
Help an old-lady Elf track down her husband's murderer? That's right up my alley.
What I don't do, because it's impossible, is search for a way to bring the goddamn magic back.
Rumors got out about what happened with the Professor, so now people keep asking me to fix the world.
But there's no magic in this story. Just dead friends, twisted miracles, and a secret machine made to deliver a single shot of murder.
Welcome back to the streets of Sunder City, a darkly imagined world perfect for readers of Ben Aaronovitch and Jim Butcher."

It feels like just yesterday that I was reading The Last Smile in Sunder City and I hadn't realized quite how much I enjoyed and missed Fetch Phillips and Sunder City until I cracked open Dead Man in a Ditch and immediately fell back into this world. There's something dark around the edges of this world that's met with a bit of sorrow and regret, but also with an oddly uplifting message that leaves me yearning for this world.
The Fetch Phillips Archives are an urban fantasy-esque series set in a world in which the magic that once inhabited the world has been destroyed and now the non-human folk must learn to live in a world where what once kept them alive, healthy, and happy is now gone. Dead Man in a Ditch picks up once again with our lovable mess of a protagonist Fetch Phillips investigating a mysterious murder that seems to have involved something that appears to be magic--magic that is, as mentioned, still gone. And as usual, Fetch gets dragged into a myriad of wildly varying investigations, some of which end up bleeding into one another.
Fetch Phillips is one of those characters that isn't necessarily the best person, but you know he has a good heart deep down and is doing what he can to make things better, if that's possible. He's sort of a mess sometimes, but that's very much a part of his charm and I think what makes him such an enjoyable protagonist. I appreciate how much Arnold goes into Fetch's backstory and spends time on his inner conflicts and demons that haunt him as a result of his past decisions. There aren't nearly as many flashbacks in this book as there are in the first and I think this really allowed the story to really move forward. I think one of my favorite things about both Fetch and some of the themes of the story as a whole is the idea of a sort of responsibility and taking note of past choices and how they affect the future, as well as how to pick up and do whatever you can to improve the situation around you, even if you were once part of the problem. There's something very redemptive and blunt about it that doesn't allow for excuses from past wrongs, but also shows that there are ways to try to move forward and do better and be better rather than have everyone dwell on what happened in the past and how the present situation arose.
There are also a small variety of supporting characters that also add a lot of charm and character to the story and I love how colorful this world is. There are all sorts of characters, most of which have some pretty rough exteriors and don't like to take trouble from anyone and I like getting to know them and learn more about each character's unique backstory in relation to the loss of the magic.
The pacing of Dead Man in a Ditch felt really well-plotted and I appreciate that there were often what felt like natural breaks between different major events and climactic moments. Fetch embarks upon a few different jobs in this book and I liked how Arnold allowed each one to have it's own space to be developed while at the same time maintaining sight of the bigger overarching plots and somehow managing to connect everything in some really compelling ways.
As I've mentioned in the past, urban fantasy is not really usually my go-to, but there's something about Luke Arnold's take on urban fantasy that really grabs me and makes me feel comfortable and excited to sink into the story. Maybe it's because it's an urban fantasy that isn't set in our own world, or maybe it's just because Arnold has a writing style that flows almost effortlessly well and feels down to earth--almost like someone is simple telling me a story (Speaking of, I definitely think I want to try the audiobook of this series sometime!). I'm not sure if this is meant to be a longer series than only three books, but I really hope it is because I can see myself returning to the adventures of Fetch Phillips and this weirdly dejected yet hopeful world again and again.
Overall, I've given Dead Man in a Ditch 4.5 stars! I really had a great time reading this book and enjoyed just about every second. There's something about this world and the characters within in that make it easy to re-join and follow along on their journeys and I can't wait to see what's in store next for Fetch Phillips and Sunder City! I'm not sure that I've adequately done this book justice in this review, but it's really something special, I think.
*I received a copy of Dead Man in a Ditch in exchange for an honest review. This has no effect on my rating of the novel.*