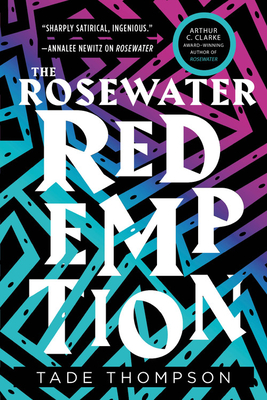 
"The Rosewater Redemption concludes the award-winning, cutting edge Wormwood trilogy, set in Nigeria, by one of science fiction's most engaging new voices.

Life in the newly independent city-state of Rosewater isn't everything its citizens were expecting.

The Mayor finds that debts incurred during the insurrection are coming back to haunt him. Nigeria isn't willing to let Rosewater go without a fight. And the city's alien inhabitants are threatening mass murder for their own sinister ends...

Operating across spacetime, the xenosphere, and international borders, it is up to a small group of hackers and criminals to prevent the extra-terrestrial advance. The fugitive known as Bicycle Girl, Kaaro, and his former handler Femi may be humanity's last line of defense."


The Wormwood Trilogy has been quite unlike anything else I've ever read, and I am sorry to see this world go. Much like in my first review, I still am not even sure how to review this book because anything said out of context is just not going to make much sense, so this will one again probably be a slightly shorter review.

Rosewater Redemption returns readers to our favorite characters, both old and new, and includes a few new perspectives to follow as well. The lives of the characters in this trilogy have altered in so many ways from the beginning of the story in Rosewater to now. I can't go into too many specifics about just what I'm referring to, but let's just say that things have changed a lot for characters like Kaaro and Aminat, as well as the mayor Jack Jacques and a few others we've been introduced to over the arc of the story.

This book contains not only the same alien elements we've been dealing with, but there is now also a bit of time travel to play around with as well, and I was surprised at how well Thompson seemed to work that into the story. I'll admit that there were times where I felt slightly lost at everything that was going on in this book, but even when I wasn't sure what a character was doing or where they were, I was still engaged with the scene, if that makes sense.

I think one of my favorite things about this book other than the characters would simple be the worldbuilding and Thompson's incredibly vibrant descriptions. Despite how completely weird things are in this setting, I have continued to feel extremely connected to it and vivid creation of its inhabits, both human and non-human alike, sentient and non-sentient. I am extremely eager to read more from Thompson and see what other creations his mind can come up with, because if this trilogy has been any indication, there's a lot more that can be developed. Thompson's writing is so effortless and the pacing is always consistent, which makes for a great reading experience.

The ending is, quite frankly, best described as "weird," but it was weird in a great way. I'm not sure I was as satisfied with Thompson's method of wrapping everything up, but I think overall I'm pretty content with where things were left. Rosewater Redemption has such a weird mix of content and plot elements and it never ceases to amaze me how Thompson manages to work those into a coherent and utterly compelling story. This entire journey has been a pedal-on-the-floor experience and I was so grateful to see that nowhere along the ride did Thompson ever lose steam or lose sight of what the purpose of this story was.

I know this review is a bit short and lacking on details, but it's just not something that I feel can be done justice with a brief summary and description. For that, you'll just have to read this incredibly inventive trilogy. Overall, I've given Rosewater Redemption four stars!


*I received a copy of Rosewater Redemption in exchange for an honest review. This has no effect on my rating of the novel.*