Can't-Wait Wednesday: The Burning God by R.F. Kuang, City of the Uncommon Thief by Lynne Bertrand, & One by One by Ruth Ware 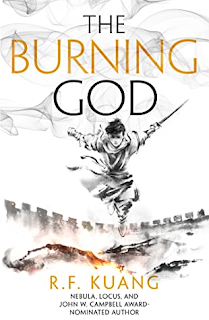 From Goodreads:
"After saving her nation of Nikan from foreign invaders and battling the evil Empress Su Daji in a brutal civil war, Fang Runin was betrayed by allies and left for dead.
Despite her losses, Rin hasn’t given up on those for whom she has sacrificed so much—the people of the southern provinces and especially Tikany, the village that is her home. Returning to her roots, Rin meets difficult challenges—and unexpected opportunities. While her new allies in the Southern Coalition leadership are sly and untrustworthy, Rin quickly realizes that the real power in Nikan lies with the millions of common people who thirst for vengeance and revere her as a goddess of salvation.
Backed by the masses and her Southern Army, Rin will use every weapon to defeat the Dragon Republic, the colonizing Hesperians, and all who threaten the shamanic arts and their practitioners. As her power and influence grows, though, will she be strong enough to resist the Phoenix’s intoxicating voice urging her to burn the world and everything in it?"
This is easily one of my most highly anticipated releases this year! I am so excited to see how Kuang wraps this trilogy up. And a little scared.
and... 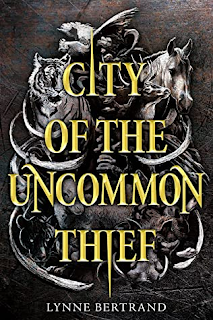 ""Guilders work. Foundlings scrub the bogs. Needles bind. Swords tear. And men leave. There is nothing uncommon in this city. I hope Errol Thebes is dead. We both know he is safer that way."
In a walled city of a mile-high iron guild towers, many things are common knowledge: No book in any of the city's libraries reveals its place on a calendar or a map. No living beasts can be found within the city's walls. And no good comes to the guilder or foundling who trespasses too far from their labors.
Even on the tower rooftops, where Errol Thebes and the rest of the city's teenagers pass a few short years under an open sky, no one truly believe anything uncommon is possible within the city walls.
But one guildmaster has broken tradition to protect her child, and as a result the whole city faces an uncommon threat: a pair of black iron spikes that have the power of both sword and needle on the ribcages of men have gone missing, but the mayhem they cause rises everywhere. If the spikes not found and contained, no wall will be high enough to protect the city--or the world beyond it.
And Errol Thebes? He's not dead and he's certainly not safe."
This sounds really interesting and also a bit weird! I have no idea what to expect from it, but I'm excited to find out.
and... 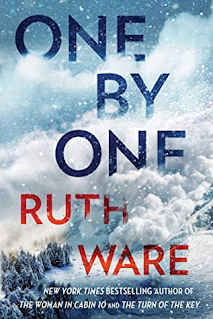 One by One by Ruth Ware
Publication: November 8th, 2020
Scout Press
Hardcover. 372 pages.
Pre-order: Amazon | IndieBound
From Goodreads:
"Getting snowed in at a beautiful, rustic mountain chalet doesn’t sound like the worst problem in the world, especially when there’s a breathtaking vista, a cozy fire, and company to keep you warm. But what happens when that company is eight of your coworkers…and you can’t trust any of them?
When an off-site company retreat meant to promote mindfulness and collaboration goes utterly wrong when an avalanche hits, the corporate food chain becomes irrelevant and survival trumps togetherness. Come Monday morning, how many members short will the team be?."
I still haven't read many Ruth Ware books, but I really enjoyed The Turn of the Key and have a few others of hers on my TBR. I'll never get tired of premises like this one and can't wait to have a chance to check it out.

Email ThisBlogThis!Share to TwitterShare to FacebookShare to Pinterest
Labels: can't-wait wednesday, city of the uncommon, cww, lynne bertrand, one by one, r.f. kuang, ruth ware, the burning god