Mini-Reviews: Devolution by Max Brooks & The Cabin at the End of the World by Paul Tremblay 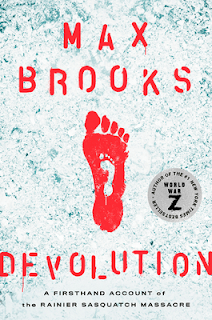 About Devolution:
"As the ash and chaos from Mount Rainier's eruption swirled and finally settled, the story of the Greenloop massacre has passed unnoticed, unexamined . . . until now.
But the journals of resident Kate Holland, recovered from the town's bloody wreckage, capture a tale too harrowing--and too earth-shattering in its implications--to be forgotten.
In these pages, Max Brooks brings Kate's extraordinary account to light for the first time, faithfully reproducing her words alongside his own extensive investigations into the massacre and the legendary beasts behind it.
Kate's is a tale of unexpected strength and resilience, of humanity's defiance in the face of a terrible predator's gaze, and inevitably, of savagery and death.
Yet it is also far more than that.
Because if what Kate Holland saw in those days is real, then we must accept the impossible. We must accept that the creature known as Bigfoot walks among us--and that it is a beast of terrible strength and ferocity.
Part survival narrative, part bloody horror tale, part scientific journey into the boundaries between truth and fiction, this is a Bigfoot story as only Max Brooks could chronicle it--and like none you've ever read before."
What I liked: This has a really great premise and setting. I appreciated how much Brooks dove into the lore of Sasquatch and clearly took care in developing his own for this story. Those elements and details were clear and really made the story feel as though it had a good amount of background and intrigue to get the plot going.

What I didn't like: To be honest, almost everything else. The characters and their actions always felt a bit off and unrealistic and I found it hard to follow along with some of their weird conversations or thought processes. Similarly, the plot progression was jilted and jumped in ways that skipped over what I would consider important plot points, as well as minimized issues that should have been a much bigger deal to the people stranded. There are so many things I didn't like about this book that it's hard to narrow it down. The main perspective we follow of Kate was extremely irritating for me and I had a hard time sticking with her throughout the story.

Overall, I gave Devolution two stars. I thought about going with one star, but it wasn't some unreadable novel and I don't think it deserves only one, so I've ended up on two. I probably wouldn't recommend this one unless you really love anything to do with Sasquatch/Bigfoot/etc. legends. 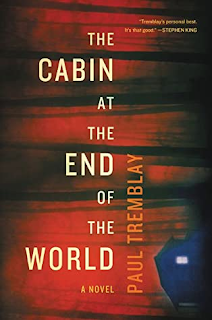 The Cabin at the End of the World by Paul Tremblay
William Morrow
Publication Date: June 26th, 2018
Hardcover. 272 pages.

About Blood of Wonderland:
"Seven-year-old Wen and her parents, Eric and Andrew, are vacationing at a remote cabin on a quiet New Hampshire lake. Their closest neighbors are more than two miles in either direction along a rutted dirt road.
One afternoon, as Wen catches grasshoppers in the front yard, a stranger unexpectedly appears in the driveway. Leonard is the largest man Wen has ever seen but he is young, friendly, and he wins her over almost instantly. Leonard and Wen talk and play until Leonard abruptly apologizes and tells Wen, "None of what’s going to happen is your fault". Three more strangers then arrive at the cabin carrying unidentifiable, menacing objects. As Wen sprints inside to warn her parents, Leonard calls out: "Your dads won’t want to let us in, Wen. But they have to. We need your help to save the world."
Thus begins an unbearably tense, gripping tale of paranoia, sacrifice, apocalypse, and survival that escalates to a shattering conclusion, one in which the fate of a loving family and quite possibly all of humanity are entwined. The Cabin at the End of the World is a masterpiece of terror and suspense from the fantastically fertile imagination of Paul Tremblay."

What I liked: The suspense in this book was spot-on. This was an anxiety-inducing book because I constantly felt like I had to keep turning the pages to find out if something horrible was going to happen net or if it would be or if everything was going to fall apart because this book was SO weird and therefore exceptionally unpredictable. You sort of guessed at something, but at the same time it just felt so uncertain because this book didn't make sense in ways. I loved that the horror of it wasn't really what you might expect, and about 50% loves me the ending that is very open.

What I didn't like: It's actually pretty hard for me to decipher what I didn't like about this book, because there aren't a lot of elements that I actively disliked, but at the same time this book definitely made me feel 50/50 loved it and hated it. An obvious answer would be the fact that you don't really have any idea what is really happening the entire time. You know in the immediate what's happening, but there's very little background to go off of, which is frustrating, but also a key part in the anxiety and horror of it all. The ending is also extremely open, as mentioned, and part of me loved it, but part of me is so irritated that I didn't get any answers. The pacing is also a bit slow at times, which occasionally took away from the suspense.

Overall, four stars! Although there are things that irritated me, I was fully compelled the entire time and could not put this book down. I also really appreciate how Tremblay managed to create such a batshit (for lack of a better word) premise that shouldn't work at all, yet somehow does? I don't know if I recommend this book, but if you like something weird and open and that will make you want ot throw it across the room multiple times, definitely check it out. If not, I'd possible avoid.
I want to add a content warning for things involving children. I won't say anything specific because of spoilers, but if you are sensitive about children in stories, then just be aware that this book does feature a little girl who has a somewhat prominent role (feel free to email/comment/etc. if you want more specific details before going into this!).

Email ThisBlogThis!Share to TwitterShare to FacebookShare to Pinterest
Labels: devolution, max brooks, paul tremblay, review, the cabin at the end of the world