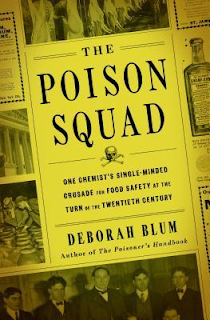 About The Poison Squad:
"By the end of nineteenth century, food was dangerous. Lethal, even. "Milk" might contain formaldehyde, most often used to embalm corpses. Decaying meat was preserved with both salicylic acid, a pharmaceutical chemical, and borax, a compound first identified as a cleaning product. This was not by accident; food manufacturers had rushed to embrace the rise of industrial chemistry, and were knowingly selling harmful products. Unchecked by government regulation, basic safety, or even labelling requirements, they put profit before the health of their customers. By some estimates, in New York City alone, thousands of children were killed by "embalmed milk" every year. Citizens--activists, journalists, scientists, and women's groups--began agitating for change. But even as protective measures were enacted in Europe, American corporations blocked even modest regulations. Then, in 1883, Dr. Harvey Washington Wiley, a chemistry professor from Purdue University, was named chief chemist of the agriculture department, and the agency began methodically investigating food and drink fraud, even conducting shocking human tests on groups of young men who came to be known as, "The Poison Squad."
Over the next thirty years, a titanic struggle took place, with the courageous and fascinating Dr. Wiley campaigning indefatigably for food safety and consumer protection. Together with a gallant cast, including the muckraking reporter Upton Sinclair, whose fiction revealed the horrific truth about the Chicago stockyards; Fannie Farmer, then the most famous cookbook author in the country; and Henry J. Heinz, one of the few food producers who actively advocated for pure food, Dr. Wiley changed history. When the landmark 1906 Food and Drug Act was finally passed, it was known across the land, as 'Dr. Wiley's Law.'"
What I liked: As much as I hated finding out about all of the truly horrible things they used to put in food (a frankly probably still do in some cases), I loved how much depth and detail Blum provided about all the different aspects of the food industry. It was horrifying (but unfortunately not too shocking) to see how rarely big companies or members of government seemed to care at all about selling potentially harmful and proven-to-be-harmful food items to the general American public for the sake of money. There is a lot of information and examples to cover, and I think Blum really did a great job of compiling all of the different examples, Wiley's life and efforts to increase regulation for food, and the general attitude shifts towards food production in a way that felt cohesive and approachable. This book definitely changed my perspective on some things, and I think it might do the same for you, as well!
What I didn't like: I didn't have too many issues with this book. The most notable things that bothered me were simply some repetitiveness and occasionally too long tangents on semi-related topics. The repetitiveness was most notable when Blum would discuss some of the issues with contaminated food and Wiley's personality or dealings with the government, though I bet that is pretty reflective of how Wile felt as well. The tangents also weren't too noticeable or bothersome, but there were a few times where I felt the author could've cut short a few sections of explanation or background. Other than this minor issue, I don't really have many complaints.
Overall, I've given The Poison Squad four stars! 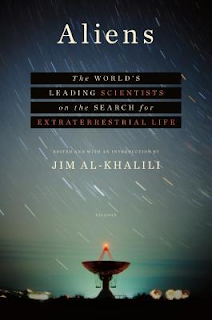 About Aliens:
"In these lively and fascinating essays, scientists from around the world weigh in on the latest advances in the search for intelligent life in the universe and discuss just what that might look like. Since 2000, science has seen a surge in data and interest on several fronts related to E.T. (extraterrestrials); A.I. (artificial intelligence); and SETI (search for extraterrestrial intelligence). The debate has intensified over whether life exists outside our solar system, what that life would look like, and whether we’ll ever make contact.
Included here are essays from a broad spectrum of the scientific community: cosmologists, astrophysicists, NASA planetary scientists, and geneticists, to name just a few, discussing the latest research and theories relating to alien life. Some of the topics include: If life exists somewhere in space, what are the odds that it evolves into something we would recognize as intelligent? What will space travel look like in the future, and will it all be done by cyborg technology? How long until we are ruled by robot overlords? (This is actually a serious consideration.) Are we simply a simulation in the mind of some supreme being, acting out a virtual reality game?
For those who have ever wondered, Is there anybody out there? here are the latest theories and evidence that move us closer to answering that question."

What I liked: I really enjoyed getting so many different perspective on alien life and it's potential, and I was intrigued to see what a large variety of opinions exist on different topics relating to alien life. All of these perspectives and methods of approaching the question of extraterrestrial life lent a lot of great insight what could actually be possible (most of which is not even remotely close to what most of our popular media depictions of 'aliens' includes, which I think most of us might expect anyway). I particularly loved getting to hear each scientist's voice on a topic and, since this can be a pretty dense and complicated subjects in regards to science and math and astronomy and whatnot, it was nice to have a variety of topics handled and all in different levels of depth and focus to keep everything feeling fresh and interesting. There's a nice mix of analyzing the current popular perception of alien life, philosophical debates and discussions, and some science-based facts about what's actually out there right now and what could occur. If you're at all interested in the current research and what we know about extraterrestrial life (as of 2017, at least), then I would certainly recommend this one!
What I didn't like: There are a few essays that really dive into some more complex mathematical components, which I sort of expected and am not really complaining about per se, but they weren't the most engaging and I definitely found myself skimming some of those paragraphs. They mainly served to draw me back out of the other fascinating content of the book, but fortunately it wasn't too hard to get back into things.
It's another four stars from me!