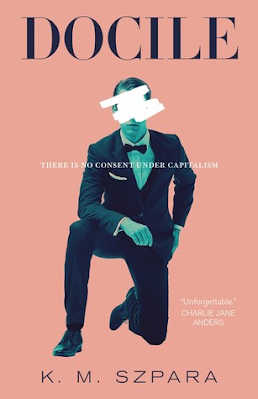 About Docile:
"There is no consent under capitalism
Docile is a science fiction parable about love and sex, wealth and debt, abuse and power, a challenging tour de force that at turns seduces and startles. To be a Docile is to be kept, body and soul, for the uses of the owner of your contract.
To be a Docile is to forget, to disappear, to hide inside your body from the horrors of your service. To be a Docile is to sell yourself to pay your parents' debts and buy your children's future.
Elisha Wilder’s family has been ruined by debt, handed down to them from previous generations. His mother never recovered from the Dociline she took during her term as a Docile, so when Elisha decides to try and erase the family’s debt himself, he swears he will never take the drug that took his mother from him. Too bad his contract has been purchased by Alexander Bishop III, whose ultra-rich family is the brains (and money) behind Dociline and the entire Office of Debt Resolution. When Elisha refuses Dociline, Alex refuses to believe that his family’s crowning achievement could have any negative side effects—and is determined to turn Elisha into the perfect Docile without it."

Before I start this review, I just want to preface this with a content warning for this book, as it has some very explicit rape, abuse, and other difficult content. My review will not go into explicit details, but I will be discussing some ideas and content relating to abuse and the aforementioned topics, so please do go ahead and skip this review if any of those topics make you feel uncomfortable. I don't want anyone to be blindsided by the subject matter of this book or review. Also, I will not go into any specific spoilers as I try to keep all my reviews spoiler free, but there will be some more general discussions that could give away some general plot points. (Head's up, this is going to be a long review!)

Docile has become a somewhat controversial book in some book circles, it seems, and I can understand why. It's intense, the subject matter is difficult, and there are a lot of parts that will leave any reader feeling a bit sick to their stomachs. Personally, I really loved this book for a variety of reasons, and I still very much respect those who didn't. Let's talk a bit about why I loved this book.

First, I think the characters developed by Szpara are some of the strongest points of this book and also seem to be the main focus. This book is about so much more than just the characters, but it's also still very much a character-centric story. The development of each character is crucial to the storyline, and I really am impressed by just how carefully Szpara developed each character and how much nuance he imparted into each one. Elisha is one of the main characters and perspectives we follow and had one of the most fascinating arcs of any book I've read in a while. Watching his slow personality change as he was influenced by Alex throughout the story was so heartbreaking that I almost wanted to look away, yet also done in such a masterful way that I couldn't help but find myself utterly compelled by it. There was only one moment where I felt his behavioral changes felt a bit sudden, but looking back on it I wonder if that wasn't done on purpose by Szpara in order to hammer home just how much the mind can be influenced without our awareness when done by someone with enough confidence and manipulative qualities.

The next main character we follow and get a perspective from is Alex, and Alex is really where things are tricky. Alex is, quite frankly, a repulsive person for a lot of this book. Szpara clear excels at writing characters that are fully fleshed out and entirely morally grey. Don't get me wrong--most of Alex's actions are reprehensible, but Alex himself is portrayed almost as being a product of his own environment as well in which he fails to see Dociles as individual human beings as well until it's too late and he's done too much damage. There's a sympathetic air that surrounds Alex as we see him develop feelings for Elisha, but as readers we also know that this is extremely toxic, abusive, and impossible due to the power structures at play. This is a hard topic to write, and I applaud Szpara for taking it on and, in my opinion, executing it so well. I think that there are a lot of people in situations where the abuser isn't some obvious 24/7 villain and it leaves victims feelings confused and uncertain about how to feel, and Szpara really dove deep into this exploration.

Before I dive into some themes, I want to briefly comment on the pacing and world-building. The pacing itself felt perfect to me--nice and steady, but done so in a way where I almost literally could not stop reading this book. In regards to world-building, this is the only place I really had a few questions. I think some more background about Dociles and Dociline and the state of the world and Maryland would have really benefited this book, as although I fully understand what was going on, there were just some moments where I felt as though things felt too extreme. Like I understand how Dociles became a thing, but when and why did it become such an abusive and exploitative system? Why was it deemed okay to have sex with Dociles? Maybe this was mentioned in the book, but I don't recall it at the moment so it just left me wondering. I will say, however, that the amount of world-building that was given in the book was enough for me to feel content and fully aware of what was going on, so these questions didn't really end up bothering me too much; at this point they are really just some world-related questions that I'm curious about and didn't affect my reading experience much negatively.

I think one of the most important takeaways from this book is from when things begin to fallout and we begin to see the pieces that are left at the end begin to find their ways into new places that work for each character. This was one of those endings, for me, where what the emotional part of your heart wants is not what the rational, healthy part of mind knows is right, and I absolutely love how Szpara handled that problem and discussion. Things are never black and white, and I think he captured really well how it can be extremely difficult to let go of something that was toxic or harmful to you when you have developed feelings that you can't quite figure out how to deal with or let go of. I also appreciated the sex positivity and sex safety aspects of this book that popped up mostly near the end (though in general this is a fairly sex positive society, as well as seemingly LGBTQ-friendly) and showed some really healthy ideas that provided a nice contrast and follow-up to the horrors that were witnessed in the first half of the book.

Lastly, I just want to touch on the themes present in this story, which, outside of the characters, are what made me appreciate this book so much. A lot of books touch on power dynamics in relationships and cultures in some ways, but they often don't go too deep into them. The most recent book/duology that I read that went deep into power structures was Queen of the Conquered/King of the Rising, which was much more heavily focused on racial power structures. Docile focuses on the more relationship-based level, both romantic and otherwise. Dociles are humans and are given human rights and are paid for their services, yet they are treated as slaves and dehumanized to great extents. How do these two ideas coexist? Docile tackles this question, as well as the question of how Dociles who do not take a drug called Dociline to make them compliant and forget what's happening react to this treatment, and how those who are 'in charge' of the Dociles, known as Patrons, interact with these humans who are treated as lesser than them. Can equal relationships exist between such a pairing? Most of us are probably quick to say no, which is what I also think, but there are some grey lines in there that make it hard for those within the situation to figure out why that sort of unbalanced power structure makes it impossible to ever have an equal relationship. I won't go into much more about this, but if you are at all interested in these types of discussions or explorations, this is definitely a book to check out.

Overall, I found Docile to be a truly fascinating book. I'm not sure if that's the right word for it, because it's also horrifying, repulsive, heartbreaking, a little heartwarming (? in Elish'a case, at least), and incredibly thoughtful. This is a careful book, crafted with care and a deep understanding of all the nuances that exist within exploitative and abusive relationships of all types. I would absolutely recommend this one if anything I've talked about sounds interesting to you, but I also understand if this is something that you just want to step away from. I'll be giving Docile a big five stars!