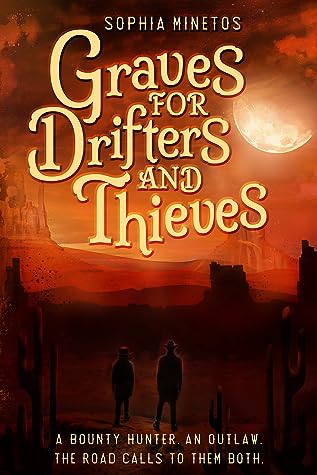 About Graves for Drifters and Thieves:
"The Hespyrian West is a place for legends and lawless men. Here, Jae Oldridge works as a bounty hunter, getting by with her wits, her magic map, and not much else. At seventeen, she hunts not for money or glory, but to find her missing father—kidnapped by ghost riders three years back.
When a saloon brawl brings Jae to the enigmatic Harney gang, she feigns interest in assisting them, hoping to turn them in later on. Survivors of the Arrowwood War, the gang pillages silver, without interest in much else... and no one knows why. The gang is led by two brothers: the stern, commanding Halston and headstrong, fiery Hodge. Joining them is an aristocrat-turned-outlaw, a rugged, snake-skinned Azmarian, and a young storyteller with a mysterious past.
Trekking across the wilderness, the group encounters warlocks, monsters, and gunfights in the service of Sterling Byrd: the gang's crooked boss. Jae learns that the gang is not what they seem. They also stand on a razor’s edge; not just with the law, but with Sterling himself. Jae finds herself growing closer to the Harneys… especially Halston.
Staying with the gang could lead Jae to a noose’s end, but Halston harbors a secret that could change her life forever. It is then Jae learns that her loyalties—wherever they may lie—do not come without a price. "

If the idea of a fantasy-Western sounds as intriguing to you as it did to me, then Graves for Drifters and Thieves just might be the book for you!

Characters are, of course, a big part of any story, and I was pleasantly surprised by how much I enjoyed getting to know the characters in this book. Our main protagonist is Jae Oldridge, though we also follow Halston, member of the Harney gang, fairly closely as well. Along with Halston in the Harney gang are Lorelin, Gryff, and Hodge, and we meet plenty of other characters (both good and bad) along the way. I like Jae quite a lot and I felt Minetos succeeded in striking a balance between having a female character that was both strong and independent while also still having plenty of vulnerabilities and personality traits that saved her from becoming too much of an stereotypical "strong female character." Her journey is a big one in this book--and I'm hoping there's a lot more to come!--and I loved watching her navigate all of the unpredictable struggles that get thrown her way.

Graves for Drifters and Thieves actually had a much larger cast of characters than I anticipated, and I'd say one of the main areas I sometimes struggled were with placing and/or remembering each character. Sometimes this was difficult because some characters don't necessarily have overly large roles, but they are still repeat figures that are worth knowing, which made me have to sort of stop and double check to make sure I was following who's who.

The fantasy elements of this book aren't overwhelmingly present, but they are very firmly in place and developed in a careful manner that really felt like it was easing the reader into it. I would personally really love to learn even more about the fantasy elements of this and dive a bit deeper into some of the area and topics discussed in this book, and I'm assuming/hoping that there are going to be future books in this series that will dive more into that. Mixing fantasy with a Western setting and tone isn't an overly common mix and I think it's a tricky one to pull off correctly since the two can have very distinct vibes to them. Fortunately, I really do think MInetos pulled off this mix well by balancing out the amount of magic carefully in relation to the Western elements, and by not overdoing the Western components, either.

This also leads into a discussion on world-building, which I though was done with care and an obvious passion for creating this world on Minetos' part. There are a lot of aspect of this world that I think could be fleshed out even more, and I'm hoping that this is the plan for future books to further explore. This is a nearly 500-page book, so Minetos does cover a lot of ground in the vein of world-building and background, but there were so many things that hold so much potential for more and I'm eager to find out what's next. A big component of this book includes some folklore-type elements and legends that play into the plot which I also really enjoyed. Whenever that much detail or background is given to a world and it's culture, it always adds more and more layers of depth to the world that I think helps develop the world-building that much more, which I really appreciate.

The pacing of Graves for Drifters and Thieves was, overall, pretty steady and kept me engaged enough without having too many fast-paced actions scenes or extensive dialogue. There were a few areas throughout that tended to feel a little slower or could have potentially been cut down a bit, but like I've said in other reviews, when the rest of the story is something I"m enjoying enough, pacing issues don't tend to bother me quite as much as long as they aren't overwhelming the rest of the plot.

OVerall, I've given Graves for Drifters and Thieves four stars! I really enjoyed following Jae along in this fantasy-Western adventure and if there is a sequel then I look forward to continuing to follow along on her journey.

*I received a copy of Graves for Drifters and Thieves courtesy of the author in exchange for an honest review. This has no effect on my rating.*