Review + Spotlight: Amari and the Night Brothers by B.B. Alston 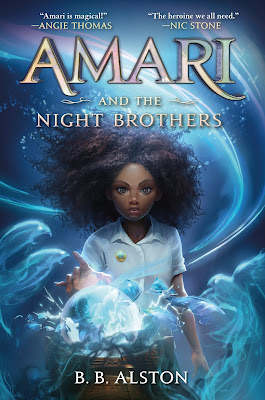 About Amari and the Night Brothers:
"Amari Peters has never stopped believing her missing brother, Quinton, is alive. Not even when the police told her otherwise, or when she got in trouble for standing up to bullies who said he was gone for good.
So when she finds a ticking briefcase in his closet, containing a nomination for a summer tryout at the Bureau of Supernatural Affairs, she’s certain the secretive organization holds the key to locating Quinton—if only she can wrap her head around the idea of magicians, fairies, aliens, and other supernatural creatures all being real.
Now she must compete for a spot against kids who’ve known about magic their whole lives. No matter how hard she tries, Amari can’t seem to escape their intense doubt and scrutiny—especially once her supernaturally enhanced talent is deemed “illegal.”
With an evil magician threatening the supernatural world, and her own classmates thinking she’s an enemy, Amari has never felt more alone. But if she doesn’t stick it out and pass the tryouts, she may never find out what happened to Quinton."

Amari and the Night Brothers is an adventurous and magical new middle grade fantasy that I truly had a blast reading. This books takes some fairly common tropes, such as magical schools, the protagonist having amazing powers they weren't aware of, etc., and really does some exciting things with them that allowed this book to feel fresh and enjoyable.

Amari struggles with fitting in at the private school that she has a scholarship to attend. She lives in the housing projects of Rosewood and is constantly reminded of that fact, not to mention the fact that her incredible older brother, Quentin, has disappeared and many people seem to act as if he simply went down the "wrong path" and chose to disappear rather than had something bad happen to him. Amari, however, doesn't buy that story and when given the opportunity to enter a world in which she could potentially find out what happened to her brother, she jumps at the chance and never lets up with trying to find out what happened.

This determination that Amari exudes is one of my favorite things about her and I think she is a fantastic example of what it means to follow what you know is right and to stand up when necessary. Amari isn't perfect, she disobeys her mom and authority figures at times, but she also has an incredible heart and strength about her that sets her apart. I specifically remember one scene in which she has a knee-jerk reaction to immediately refuses even considering learning something dark and dangerous, which I think says a lot about her character as a whole in her efforts to do good and focus on helping others. She has to put up with a lot of types of bullying and hatred and prejudice, and I love how she learns about herself and others while doing this.

The world-building of this book is so fun and is one of those that I can tell is just bursting at the seams and oozing with new details and depth. Because of this, there are times when it seemed as if Alston had so much he wanted to include that it ended up only being small snippets that never got fully developed and left me wanting more, but I do hope that more is explored and elaborated in subsequent books, as there is a lot of really great potential there.

This book tackles so many great topics, the most prominent of which is prejudice. I love how Alston tackles this topic in so many varying ways, all of which developed a different aspect of how prejudice can and does affect people in different ways, as well as all of this often hidden forms it takes and how many people don't even realize it's happening when it does.

The only real quibble I have with this book is that there were occasionally times where I felt as though some major revelations occurred or something momentous happened to the protagonist and everything was just accepted very quickly. There didn't always feel like there was enough questioning or confusion around things, which felt a little odd to me, but at the same time--if I may contradict myself--I sort of feel like doing this allowed the pacing and plot to keep moving quickly and will absolutely keep readers, especially young readers, engaged. It was something that stood out to me as a bit inconsistent and odd, but at the same time didn't really take away from my reading experience too much because I was still very much engaged with the story.

Overall, it's an easy 4.25 stars from me! I cannot wait to see where B.B. Alston takes Amari next and I would highly recommend this to anyone that is a fan of exciting middle grade fantasy.

*I received a copy of Amari and the Night Brothers courtesy of the publisher in exchange for an honest review. This has no effect on my rating of the book.* 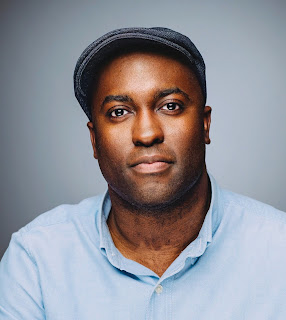 B.B. Alston started writing in middle school, entertaining his classmates with horror stories starring the whole class where not everyone survived! After several years of trying to break into publishing, he had just been accepted into a biomedical graduate program when a chance entry into a twitter pitch contest led to his signing with TBA, 20+ book deals worldwide, and even a film deal. When not writing, he can be found eating too many sweets and exploring country roads to see where they lead.

B.B. was inspired to write AMARI AND THE NIGHT BROTHERS because he couldn’t find any fantasy stories featuring Black kids when he was growing up. He hopes to show kids that though you might look different, or feeldifferent, whatever the reason, your uniqueness needn’t only be a source of fear and insecurity. There is great strength and joy to be found in simply accepting yourself for who you are. Because once you do so, you’ll be unstoppable.

Advance Praise:
“The author weaves magical whimsy with honest, realistically portrayed circumstances, allowing Amari’s literal #BlackGirlMagic to shine even when she doesn’t believe in herself. This timely, energetic, first-person narrative moves quickly with clear descriptions, a thrilling buildup, and strong messages about profiling. An impressive debut series opener.”
—Kirkus Reviews
“Supernatural creatures are hidden in plain sight in B.B. Alston's exhilarating middle-grade fantasy debut...The definitive hook of this narrative is Alston's exceptional skill for world building....fans of the Harry Potter series will likely find much to enjoy in Alston's imaginary Bureau, which features significantly more authentic diversity than Rowling's Hogwarts. Amari stumbles into one capricious adventure after another en route to a stunning conclusion that also lays the track for a sequel to this breakout debut."
—Shelf Awareness
“An enchanting fantasy adventure filled with heart and soul. Amari is magical!”
—Angie Thomas, #1 New York Times bestselling author of THE HATE U GIVE
“As a former black girl misfit who wanted nothing more in the world than to be magical, this book is a song to my soul. Amari is the heroine we all need.”
—Nic Stone, #1 New York Times bestselling author of DEAR MARTIN
“Sharp, funny and brightly imaginative -- a big adventure filled with magic and heart.”
—Jessica Townsend, New York Times bestselling author of the Nevermoor series
"Clever, imaginative, and filled with heart. I loved every magical page."
—J.C. Cervantes, New York Times bestselling author of THE STORM RUNNER
“Amari and the Night Brothers gives an electrifying jolt to middle-grade fantasy, that takes  the ingredients we know and love--strong-willed, relatable protagonist, a worthy quest,  and a thrilling magical portal--and makes them fresh and new. From the first pages, Amari  is at once self-possessed and an underdog, battling racism, bias and poverty, all later  mirrored in her efforts to find her brother inside the fantastical labyrinth of the Bureau of  Supernatural Affairs. Funny, fast-paced, and ultimately moving, B.B. Alston's debut is a  rousing success and kicks off a series that will truly stand out from the rest!”
—Soman Chainani, author of the bestselling The School for Good and Evil series
"The surprises and story never slow down for a minute in this magical, astonishing world,  with a heroine who’s like Buffy meets Meg Murry multiplied by Shuri to the power of  awesome. I want to live in Amari’s world and watch her save it (or have her come here and  save ours!)!"
—Tui Sutherland, bestselling author of the Wings of Fire series
Posted by Jordan @ForeverLostinLiterature at 2:00 AM