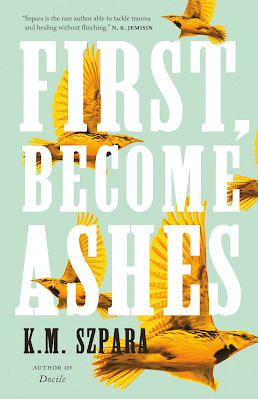 First, Become Ashes by K.M. Szpara
Tor Books
Publication Date: April 6th, 2021
Hardcover. 304 pages.
About First, Become Ashes:
"The Fellowship raised Lark to kill monsters.
His partner betrayed them to the Feds.
But Lark knows his magic is real, and he'll do anything to complete his quest.
K. M. Szpara follows Docile, one of the most anticipated science fiction novels of 2020, with First, Become Ashes, a fantastic standalone adventure that blends pain and pleasure and will make readers question what is real, and what is magical.
Lark spent the first twenty-four years, nine months, and three days of his life training for a righteous quest: to rid the world of monsters. Alongside his partner Kane, he wore the cage and endured the scourge in order to develop his innate magic. He never thought that when Kane left, he'd next see him in the company of FBI agents and a SWAT team. He never dreamed that the leader of the Fellowship of the Anointed would be brought up on charges of abuse and assault.
He never expected the government would tell him that the monsters aren't real--that there is no magic, and all the pain was for nothing.
Lark isn't ready to give up. He is determined to fulfill his quest, to defeat the monsters he was promised. Along the way he will grapple with the past, confront love, and discover his long-buried truth."

Before diving into this review, I'd just like to include a big content warning (which is also found in the beginning of the book) for sexual violence (rape, abuse), violations of consent, and  explicit sadomasochism depictions. There is very explicit abuse of scenes that are difficult to take in, so please do be aware and cautious if any of the mentioned topics are something that cause any difficulties for you. I do not make any explicit description of any of this content in my review.

Szpara's debut last year Docile was a bit hit or miss for a lot of people, and I was one of those that absolutely loved it--which of course made me incredible excited for his sophomore novel, First, Become Ashes. I didn't quite end up  loving First, Become Ashes as much as Docile (but frankly, that'd be hard to do for anything!), but I did still thoroughly enjoy this one as well.

First, Become Ashes essentially begins--and ends--as a story about a cult and those affected by it. The Fellowship is a cult led tough leader Nova, where members (those know as the 'Anointed') are trained to have upmost loyalty and to wield magic in order to fight monsters that populate the "outside" world that makes up the entirety of the world outside the gates of the Fellowship. This is a story that largely explores the aftereffects of having lived in a cult and what different forms of 'deprogramming' (for lack of a better word) can manifest. Szpara excellently explores the mental and physical affects of repeated abuse and brainwashing that result from the many characters' experiences as part of the cult, and I particularly appreciated that we got to follow a couple different members who were all at different stages of belief and acceptance (or lack of acceptance).

Once again, one of Szpara's biggest strengths is in his characters. The story and plot are not without their own strengths, but it's really his well-developed and multi-dimensional characters that tell the whole story. We follow four perspectives in this book: Lark (Meadowlark), Kane, Calvin, and Deryn. Lark and Kane are Anointed members of the Fellowship (meaning they get the training to fight monsters), Deryn is a Fellow, and Calvin is an "outsider"--a regular everyday person just like you and me.

Just shy of turning 25 when he would get to begin his own quest fighting monsters, Lark is liberated from the Fellowship by his partner Kane, who has become an FBI informant in order to help get the abusive Fellowship shutdown. Lark is fully enmeshed in the fellowship society and refuses to believe that everything he's been taught is a lie. Lark is one of the most compelling characters to follow throughout this story as we watch him slowly come to grips with understanding what has happened to him and what this all means for the future. He is deeply troubled and struggles immensely with knowing what or who to trust and how to determine what is real and what is not. I think Szpara captured this confusion well, while also capturing Lark's determination to continue on his quest no matter what--or who--stands in his way. Lark has also suffered from many severe forms of physical and mental abuse, and Szpara does not shy away from exploring these topics in depth.

Then there's Calvin, one of the other main POVs we follow, who gets caught up the world of Lark and the Fellowship and chooses to assist Lark on his quest. Calvin is someone who I would describe as a dreamer, some who is always looking for more and is willing to push aside doubts in order ot hope and dream that the magic Lark talks about is real. I think there's probably a part in all of us that love and cherish fantasy and speculative fiction that can relate to this desire of Calvin's--I know I can. Calvin was such a well-developed character with his own journey towards better understanding both himself and others, and I also really appreciate how respectful he was towards Lark and everything Lark did that was entirely unfamiliar to him.

Lastly are Kane and Deryn, the informant and the one quick to jump off the Fellowship train after harboring many bitter feelings toward the Anointed for many years--and also Lark's half-sibling. Kane is the only POV we get that really focuses on a time previous to the present in which we get to see firsthand what went on in the Fellowship and all of the myriad of awful ways in which they were abusive towards their members. Much like with Lark, we get to experience firsthand some of the traumatic abuse that Kane is subjected to, and it really is sobering and difficult to read while highlighting the importance of being aware and careful of these topics. Deryn is not an Anointed and is not quite as upset about leaving the Fellowship as Lark, but they carry some extremely conflicted feelings about things once on the outside as well.

In regards to the plot itself, I found myself mixed on how I felt about it. In some ways, I found it utterly compelling and couldn't pull myself away, but at other times I felt as though there a few too many things that felt like plot holes or that just didn't quite make sense to me. I think the reason that these issues didn't bother me too much, though, is because this book felt like it was so much more focused on the characters and their individuals journeys rather than the intricacies of the plot itself. It wasn't really ever supposed to be about the magic itself or the details of the Fellowship and the events that occurred after it was exposed, so the world-building felt strong for what it was intended to be.

*I received a copy of First, Become Ashes courtesy of NetGalley and the publisher in exchange for an honest review.*