Review: The Ikessar Falcon (Chronicles of the Bitch Queen #2) by K.S. Villoso 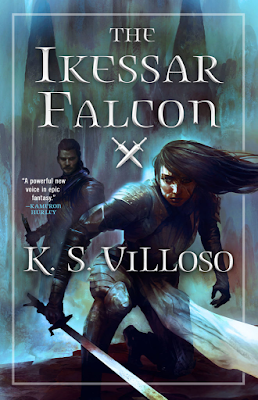 About The Ikessar Falcon:
"The stunning sequel to The Wolf of Oren-yaro where the queen of a divided land struggles to unite her people. Even if they despise her. K. S. Villoso is a "powerful new voice in fantasy." (Kameron Hurley)
The spiral to madness begins with a single push. Abandoned by her people, Queen Talyien's quest takes a turn for the worst as she stumbles upon a plot deeper and more sinister than she could have ever imagined, one that will displace her king and see her son dead. The road home beckons, strewn with a tangled web of deceit and impossible horrors that unearth the nation's true troubles - creatures from the dark, mad dragons, and men with hearts hungry for power. To save her land, Talyien must confront the myth others have built around her: Warlord Yeshin's daughter, symbol of peace, warrior and queen, and everything she could never be. The price of failure is steep. Her friends are few. And a nation carved by a murderer can only be destined for war."

If you haven't read book one, you can find my review here. I read book one back in 2019, so I was concerned about forgetting things--never fear, Villoso has a recap at the beginning of the book! I love that more and more authors are beginning to do this, but I also still wish more would start including these recaps because they are invaluable.

I enjoyed The Wolf of Oren-Yaro back when I read it, but I definitely had some reservations by the end and knew that the sequel would be the make or break for continuing the series. Fortunately, The Ikessar Falcon completely swayed me and won me over because it was a stunning sequel (and I think it may have even made me like The Wolf of Oren-Yaro more, also)! This is also one of those series where I feel like any form of detail has the potential to be a spoiler in one form or another, so I'm going to try to keep my review from mentioning any specific plot points or character beats.

The Ikessar Falcon picks up not long after the intense ending from the first book and we are thrown right back into the midst of the lies, political upheaval, distrust, and essential chaos from the first book. The general goal of book two is to get Queen Talyien back to her people and, most importantly, her son in Jin-Sayeng. Of course, this is not nearly as easy as it may appear, and there are a number of obstacles that get into Tali's way as she attempts to hold onto her power and protect those she cares about.

Tali has definitely becomes a more compelling and interesting character for me with this second installment, and I think it's in this book where she really gains a backbone and comes into her own as a leader. Her development from the first book until now as well as over the course of this book are so carefully and brilliantly done. You can really see watch how Tali, as a rather brash and rather unlikable character, begins to think and consider more about herself, her rule, her people and kingdom, and those around her. I mentioned in my review for the first book that one of my favorite things was the strong narrative voice of Tali, and that remains just as strong and important in this book as in the first--and remains a compelling storytelling component.

And as much as I enjoyed following Tali through The Ikessar Falcon, I also immensely appreciated getting to know and revisit many of the secondary characters as well, especially Khine and Argos. Tali's husband, of course, continues to absolutely drive me to crazy, which I think is intended. I want to like him for some reason and appreciate his own strategic ideas, but there are just too many things that irritate me and at this point to allow any inkling of caring about that man.

This is very much a character-focused fantasy series thus far, which Villoso executes beautifully. There is also endless scheming, plots, and twists, so I can promise that you won't get bored with this book because of the plot. Despite the character focus, the plot has also really expanded in scope and meaning overall, which I think is also what made this such a strong sequel. It's not as though Villoso is just continuing the storyline from the first book, but rather that she is adding to every aspect in the perfect increments to keep interest piqued. Some authors try to add to sequels and miss the mark, but Villoso executes this near-flawlessly. And although we got to explore a lot of world-building in the first book, I feel the sequel has just opened everything up so much more. Not only do we get more of Tali, but we get to see more of this world and better understand all of the turning machinations that make it a messy moving reality.

I realize this review has been a bit vague, but trust me when I say that this is an incredible follow-up to a unique fantasy that I think brings a lot to the fantasy book community.  There's something about this series that feel fresh and unlike much of the other fantasy that I usually read, which is always a nice addition. Overall, it's 4.25 stars from me! I can't wait for the third and final book in the trilogy, The Dragon of Jin-Sayeng, out May 4th!

*I received a copy of The Ikessar Falcon courtesy of the publisher in exchange for an honest review.*

Email ThisBlogThis!Share to TwitterShare to FacebookShare to Pinterest
Labels: chronicles of the bitch queen, k.s. villoso, review, the ikessar falcon