Review: We Begin at the End by Chris Whitaker 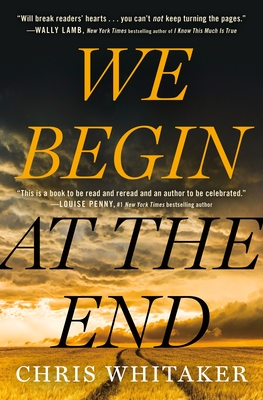 About We Begin at the End:
"There are two kinds of families: the ones we are born into and the ones we create.
Walk has never left the coastal California town where he grew up. He may have become the chief of police, but he’s still trying to heal the old wound of having given the testimony that sent his best friend, Vincent King, to prison decades before. Now, thirty years later, Vincent is being released.
Duchess is a thirteen-year-old self-proclaimed outlaw. Her mother, Star, grew up with Walk and Vincent. Walk is in overdrive trying to protect them, but Vincent and Star seem bent on sliding deeper into self-destruction. Star always burned bright, but recently that light has dimmed, leaving Duchess to parent not only her mother but her five-year-old brother. At school the other kids make fun of Duchess―her clothes are torn, her hair a mess. But let them throw their sticks, because she’ll throw stones. Rules are for other people. She’s just trying to survive and keep her family together.
A fortysomething-year-old sheriff and a thirteen-year-old girl may not seem to have a lot in common. But they both have come to expect that people will disappoint you, loved ones will leave you, and if you open your heart it will be broken. So when trouble arrives with Vincent King, Walk and Duchess find they will be unable to do anything but usher it in, arms wide closed.
Chris Whitaker has written an extraordinary novel about people who deserve so much more than life serves them. At times devastating, with flashes of humor and hope throughout, it is ultimately an inspiring tale of how the human spirit prevails and how, in the end, love―in all its different guises―wins."

We Begin at the End is an unexpectedly intense and unforgettable story of family, loss, and hope. I've seen this classified as crime fiction a couple times since reading it, and although there is technically a crime in this book that needs to be solved, I wouldn't go into this expecting a regular crime novel. Whitaker's storytelling is deliberate and eloquent and I am so glad I had a chance to go on this journey, even if it did completely break my heart at multiple turns.

We Begin at the End follows the thirteen-year old self-proclaimed "outlaw" Duchess Day Radley and sheriff Walker--more commonly known simply as 'Walk'--as they both try to navigate their own individually difficult lives that occasionally intersect due to Duchess' mother, Star. Our story takes place in a small coastal town in California that is lowly but surely being overhauled from the quiet town it was into something more modern and developed. The people living in this town are largely resistant to the changes, which reflects well with the general sluggish atmosphere of its residents and the difficult, complicated lives they all seem to lead. The story kicks off when Vincent King, a man who has been in prison for the last thirty years, returns to town and some unexpected events occur.

Duchess, the first POV we follow, is an incredibly well-developed character that is both utterly compelling to follow and similarly difficult to follow throughout the many tragedies that occur in both her and her younger brother Robin's lives. Her anger at the world is entirely justified, in my opinion, and it was heartbreaking to watch her attempts to protect Robin and keep her family together as best as she can. Her character undergoes so much change and development that I couldn't help but feel impressed at Whitaker's writing. She is an incredibly complex character dealing with a myriad of trauma, grief, and the taking on of parental roles she shouldn't have to at her age. Everything about her is a closed off wall of anger, but the way she manages to navigate the world and learn to maybe trust or accept others was beautiful to watch.

The sheriff, Walk, is our second perspective and was someone that I found similarly compelling to follow, but in a different way, as his life stage is one completely different from Duchess' (understandably, given their ages and life situations) yet is just as difficult and melancholy as Duchess'. His story is a quieter one than Duchess' as he struggles with feeling physically and mentally unwell, as well as his rather mundane day-to-day life as sheriff. His change and development is much more subtle than Duchess', but it's unavoidably there and brings so much depth to his story and character. His relationships with Star and Vincent are both so complicated, but the ways in which Whitaker brings those out and showcases them is deftly done and adds many layers of nuance to everything.

We Begin at the End is a slow burn of anger, dejection, loss, and hope all rolled into one extraordinarily moving story. This is a story that with a slow, steady pacing that kept me hooked on the lives of each character and unable to turn away from the pages. This was a deceptively difficult story to read, and i Mean that in the sense that I didn't expect to hit as hard as it did or to make me feel as sorrowful and sad as I did for these characters stuck in these lives. I wanted for nothing more than happiness for each one, but because this book is so unfortunately real and raw, things didn't always end up as I'd hoped. And even though the ending is technically probably considered to be an uplifting one, it still made me feel a quiet sadness at how everything resolved. It's the sort of ending that you understand and that may be best as a result of everything that's happened, but it's not a satisfying one that makes you feel warm and fuzzy inside. But that's okay, because I feel like that's just what life is--things happen, and all we can do is learn to make the best of everything in whatever way we can.

Overall, I've given We Begin at the End five stars. This is a beautiful and heartbreaking book that I would absolutely recommend to anyone interested in following the lives of some truly captivating characters.

*I received an ARC of We Begin at the End courtesy of the publisher in exchange for an honest review.*

Email ThisBlogThis!Share to TwitterShare to FacebookShare to Pinterest
Labels: chris whitaker, review, we begin at the end